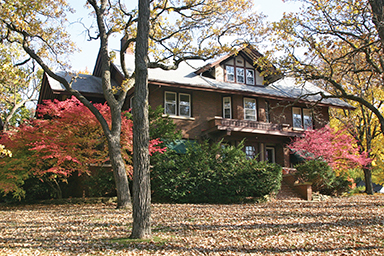 So many different people make Lincoln their home—young families, college students, new Americans, government workers, tradespeople, professionals and entrepreneurs. And there is a neighborhood just right for everyone. Whether you’re visiting or living here full time, each neighborhood is another unique and charming side of Lincoln.

There are more than 50 neighborhoods in Lincoln—and new ones are being planned and built as this is being written. These are just a few of them. Contact information for all of Lincoln’s neighborhood or voluntary homeowners’ associations are listed at www.lincoln.ne.gov/cIty/urban/neighborhoods/index.htm.

This newer, developing community is located east of the airport and north of I-80. Defined by its large, elegant, homes and new, luxury apartments, Fallbrook also includes an office park, YMCA, middle school, supermarket, and a town center. And Fallbrook hosts a farmers market during the season. Visit fallbrookusa.com for more.

The College View neighborhood, located along 48th Street near Calvert, grew up around Union College. Union College is a Seventh-Day Adventist school built in the early 1900s on the highest elevation in Lincoln. When it was built, the city agreed to build a trolley line to the college from downtown Lincoln and for a time the new college campus became a destination for family outings. This charming area has an attractive mix of small businesses that reflects its past as a separate village. The many single-family homes and Union College student apartments make the neighborhood a smaller, college town within the city. For more information visit www.facebook.com/college.view.nebraska.