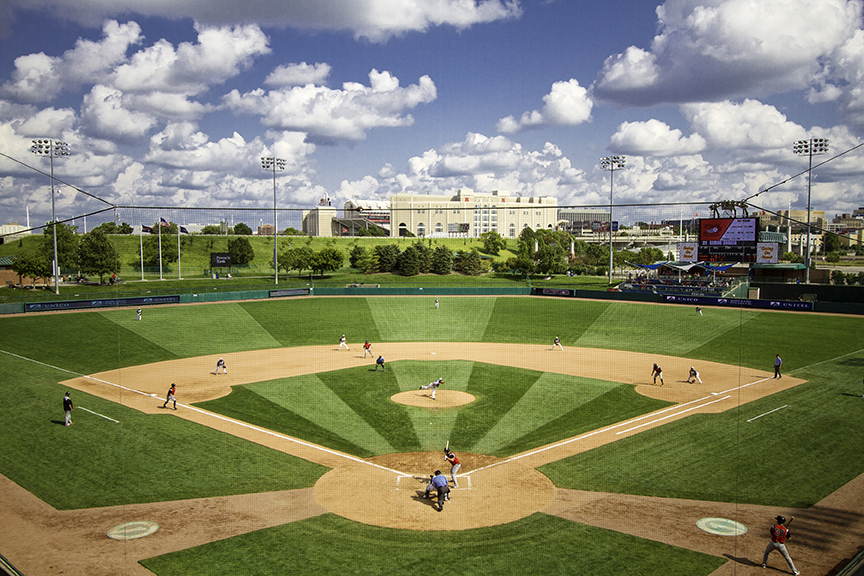 The City of Lincoln lies in the heart of America. Surrounded by small towns and farmlands, people in the city and across the state pride themselves on the American values of hard work and honesty. And after a long day at work, whether out in a field or in an office, Lincolnites turn to a pastime and tradition that is also strictly American: baseball.

True, Lincoln lacks a Major League Baseball team, but baseball fans get their share of their favorite sport each year in a variety of ways.

Right in the midst of the city’s most popular area lies Haymarket Park. It is home to both the Nebraska Cornhusker NCAA baseball team and the American Association of Independent Professional Baseball’s Lincoln Saltdogs. As the host of both an NCAA team and an AAIPB team, baseball fans can enjoy games from March, when the Huskers’ season is just getting rolling, through August and into September, when the Saltdogs’ season comes to a close. They can even get a little dose of the sport in mid-October when the Huskers play their Red/White Series game.

Haymarket Park has a total capacity of 8,500, with seating for 4,500 and room for 4,000 more on the grass berm areas. Pedestrian walkways connect the park to both the Haymarket and the University of Nebraska-Lincoln campus, making it easy and convenient for college students to walk to a Husker game straight from campus, or visitors to enjoy Lincoln’s downtown shops and restaurants after a day at the ballpark.

Every season, the Saltdogs amp up the excitement with special promotions such as “Tall Boy and Tacoriffic Tuedays,” “Fireworks Fridays,” and “Souvenir Saturdays.” For 16 years now, fans have enjoyed games at Haymarket Park with friends, family, and colleagues.

But fans aren’t the only ones who love Lincoln’s baseball venue. Players love it too. Hawks Field has twice been named the Baseball Field of the Year at the college and university level by the Sports Turf Managers Association and has been voted the Best Playing Field in the Northern League of the American Association for 16 straight years.

For those young baseball enthusiasts who cannot get their fill of the sport just from watching, the Lincoln Saltdogs also have an affiliation with a local youth baseball program, the Lincoln Junior Saltdogs.

Originally named after the Lincoln Chiefs minor league baseball team, the League was founded in 1957, and kept the name “Little Chiefs Club” until 1991 when it became Lincoln Little League. It didn’t become known as  the Junior Saltdogs League until 2008, when it replaced Lincoln Little League after exceeding population restrictions that the National Little League required. The League provides programs for children 5-17 years old. They have an U6 T-Ball division, an U8 Machine Pitch division, and U10, U12, U14 and U16 age divisions. They also have a division called “Homer’s Heroes” for children aged 5-17 who have physical or mental disabilities.

There are no try-outs necessary for the Junior Saltdogs League, all players who register are placed on a team, so even new players with little or no experience can join the League. The programs help children learn and develop baseball skills, as well as life skills, such as sportsmanship, confidence and a work ethic. Young players may also get a chance to meet Lincoln Saltdogs mascot Homer and Saltdogs players and coaches. With teams of 11-15 players, and more than 2,000 players in the League, children also have the opportunity to build new friendships.

Whether a die-hard baseball devotee or a casual sports fan, a businessman looking to relax after a long day or a parent trying to pass on the love of the game to a child, Lincoln’s baseball scene continues to provide fun, relaxation, and entertainment to the people living in America’s heartland.