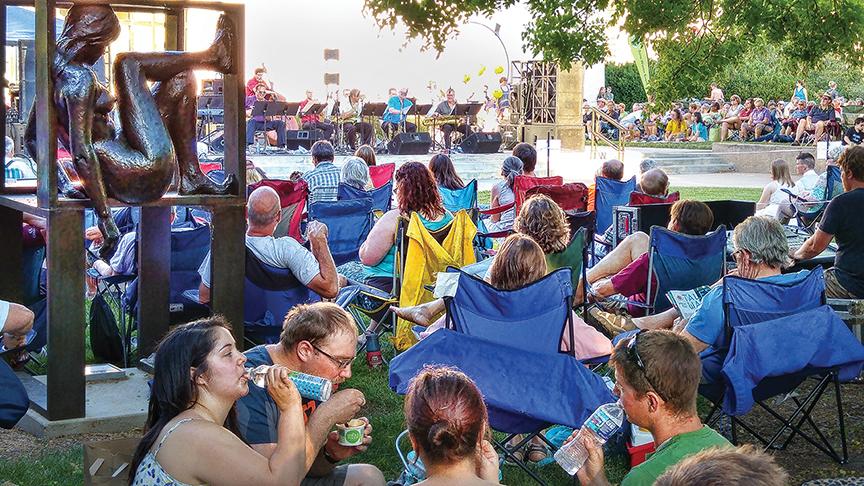 The sound of jazz – heavy bass and light cymbals, fiery saxophones and cool crooning – are often associated with the music’s meccas: New Orleans, New York and Chicago. Our city is not destined to supplant these gold, silver and bronze medalists of jazz’s heritage. Yet as you walk through the University of Nebraska-Lincoln’s lush campus on a late spring evening, stroll along P street in July, cruise through the rolling prairie of Pioneers Park in early fall or on impulse hit a coffee shop for a live show, what you will hear is a harmony between Lincoln’s players, promoters and fans of jazz that sounds better than ever.

In recent years, these three pillars—players, promoters and fans—have merged into a tight trio. Dean Haist, executive director and member of the Nebraska Jazz Orchestra (NJO), is equal parts jazz player, manager and advocate. Since moving here in 1971, Haist has seen the city’s attitude toward jazz evolve.

“Over the years, I’ve seen more and more bars and places provide opportunities to jazz musicians. There are many more venues that will occasionally host jazz musicians.”

Haist has been a master craftsman in building up Lincoln’s jazz scene. As NJO director, he helps orchestrate its annual concert series, which this year is a remarkably strong one. In addition to renowned saxophonist Rich Perry, the 2017 series features up-and-coming trumpeter Marquis Hill, trombonist Ed Neumeister and concludes with a special performance by Lincoln native and Maroon 5 guitarist James Valentine at the Lied Center.

Outside venues are starting to blossom too. The Lincoln Community Foundation’s Garden Performance Series—which hosts live shows at noon Wednesdays throughout the summer at 1415 N Street—has breathed new life into the work week’s rigamarole.

One of the newcomers to this growing outdoor repertoire utilizes Nebraska’s enchanting native landscape. Jazz on the Prairie began in 2015 as a way to enjoy jazz in Pioneers Park. The event, a fundraiser for the Friends of Pioneers Park Nature Center, also encourages people to venture out and appreciate the canvas of native grasses, wildflowers, birds and butterflies in their midst, explains Andrea Faas, the center’s coordinator.

“People might not realize that of the park’s 668 acres, 500 are prairie. We want people to appreciate the prairie.”

A small patch of prairie is mowed just for the show. Tickets for the festival are $40 and last year’s performers included Sarah Cosano and Cambia, the Jackie Allen Quintet and Gulizia Brothers and Friends. The fundraiser will return in August 2017 for its third year and Faas hopes it will do so favorably, given its pertinence as a fundraiser.

“These funds allow us to purchase things, like a Kawasaki utility vehicle to help clean up the park. Also, we can pay our guides who lead park hikes  for elementary students and fund summer camp scholarships.”

While events like Jazz on the Prairie help Lincolnites appreciate biological diversity, others in town are using jazz to foster the same for racial diversity. Jazz promoter, internet radio entrepreneur and African-American James Terry works tirelessly to ensure people of color are represented on the bandstand.

“Look,” Terry says, “jazz and blues are Americans’ legacy. The people who invented it, African-Americans, don’t get as many jobs playing it here in Nebraska. That kind of bothered me.”

So for much of the past decade, Terry has set out to change that. Back in 2009, he founded JazzTime Smooth Radio, an online station catering to the smooth jazz set with a prevalence of black artists. In addition to the station, he has organized and emceed live jazz at the Nebraska Club, James Arthur Vineyards and UNL. Terry says it was difficult at first to find willing venues.

Thankfully, a partnership between Terry and the Downtown Lincoln Association has started to change that. In 2015, they collaborated to launch Tower Jazz, a free, outdoor music series every Tuesday night in July at Tower Square on 13th and P Streets. Last year, with the help of an increasing roster of sponsors, the series featured six acts including nationally-known Nebraska artists like Bill Wimmer and Darryl White and local staples Swing Fever and the O Street Brass Band. In 2017, Terry says with a big smile, the goal is to extend the series to eight weeks.

“I want to attract more national acts, but I also want to have more woman singers and woman bandleaders.”

Still others are working to bring jazz to a new audience. Ever since discovering his parents’ record collection in Cozad, Nebraska, Spencer Munson has lived for music. Well-known as one of Lincoln’s top DJs, Munson last year became event coordinator for Jazz in June, Lincoln’s most well-known jazz series. Set in the tranquil green space behind the Sheldon Museum of Art, the free series takes place each Tuesday in June from 7-9 p.m. and routinely attracts crowds upwards of 5,000. As it enters its 26th season this year, Munson wants to take Jazz in June to greater heights.

“I’m writing grants. We’re looking at a winter fundraiser. I want to do higher caliber workshops to enrich the community. This will be a year-long effort,” he says from his bedroom, an LP-lined loft near downtown.

Asked about how he thinks jazz is perceived in Lincoln, Munson pauses a beat.

“I feel that jazz needs a little kick in the butt. A little invigoration and revitalization of the strong but maybe unknown jazz scene here. The marketing aspects of jazz in Lincoln can be modernized.”

A kick in the butt.

Precisely what Munson, James Terry, Andrea Faas, Dean Haist and many other Lincolnites are doing. A hip millenial, an African-American, a woman and a veteran trumpeter, together kicking in the places that need kicking to continue the city’s jazz rebirth.