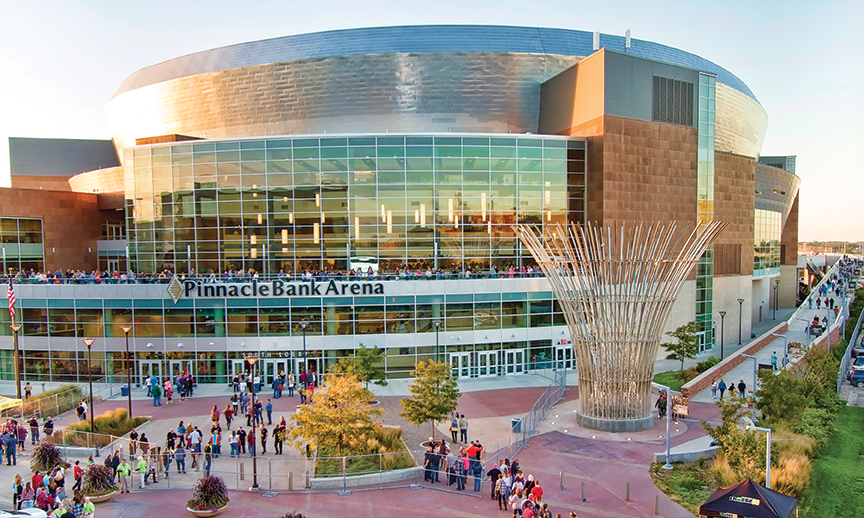 Arena draws people to the heart of the city

The arena spells entertainment, whether its sports or music or family shows. The arena, along with nearby hotels, restaurants and Railyard lure tourists as well as locals looking to have a delightful experience.

Blake Shelton brought his country style ballad singing to the arena along with 14,158 fans, one of the largest crowds yet at the arena.

She told her 15,000 fans who packed the arena that the video for the next single from her “Storyteller” album was being shot that night.

The Church Bells video includes footage from Church Bells as well as shots from throughout the Lincoln concert. The video has a few seconds of shots of the crowd and wide exposures showing the arena bowl and the dramatic staging that ran down the middle of the floor.

Justin Bieber and KISS rocked into the arena in the summer and the fall headliners were Keith Urban, Alan Jackson and Stevie Nicks. Red Hot Chili Peppers and Eric Church start off the year 2017.

Eric Church is making a second appearance at the Arena when he kicks off his 2017 tour in Lincoln. Besides performing to sell-out audiences, he and his crew were impressed with the arena’s equipment and dressing rooms as well as downtown Lincoln.

As the home of Husker basketball, the arena and University of Nebraska-Lincoln team up to host women’s and men’s basketball games. Sports fans fill the arena to root for the Husker teams and enjoy the excitement of the arena games as well as the surrounding Haymarket.

With its “big arena” atmosphere and lots of amenities, such as club seating, spacious concourses and high definition screens, the arena attracts other sports events as well.

Tom Lorenz, general manager for the Pinnacle Bank Arena, said television coverage for events is good for the community. “It reflects well on the arena and Lincoln,” he said.

A new event in 2015 was an NBA exhibition game between the Chicago Bulls and Dallas Mavericks. The game drew a standing room-only crowd of more than 15,000. It was a loud, electric atmosphere for a game that was decided at the buzzer.

Along with the old favorites, 2016 was the year for some new events.

The circus came to the arena for the first time with Circus XTreme by Ringling Brothers and Barnum and Bailey.

Tickets included a pre-show where children and families could meet performers and get up close to the menagerie of animals.

The NORCECA Women’s Olympic Volleyball Qualifying Tournament was hosted by the Pinnacle Bank Arena for the first time in January. A world-class competition, it was a big hit with volleyball fans. Adding to the excitement was the opportunity to see three former Husker volleyball players on the USA Olympic team. The finals brought 10,000 spectators to the arena.

Circue de Soleil’s Toruk—The First Flight, took its first flight into Lincoln and the arena in July 2016. Inspired by James Cameron’s film Avatar, TORUK is a tale set thousands of years ago, well before humans arrived on the planet Pandora. Cirque du Soleil wowed the audience with its arena theater – acrobatics mixed with multi-media to spin a classic quest story.

The Pinnacle Bank Arena is a popular place for a myriad of family and community events:

Harlem Globetrotters, made world famous by their ball handling wizardry and basketball artistry.

Sesame Street Live features the Sesame Street characters who dance and sing their way into the hearts of the audience.

Lincoln Business Expo by the Chamber of Commerce is the area’s largest free business trade show.

Project Homeless Connect is a one-day, one-stop event where individuals and families who are homeless can receive a variety of on-site services.

NSAA State Basketball championships are the epitome of school spirit as brings people come together from across the state to celebrate high school basketball.

The Festival Space is a parking area north of the arena that is equipped with power and infrastructure. As a multi-use space, it provides an area for festivals and car shows without closing city streets.

A popular event is Ribfest, held in the summer with barbecue to suit a variety of tastes. And Celebrate Lincoln is a family-friendly music festival billed as the “First big party of the summer.”

Lorenz said the goal of the arena was to impact the economics of Lincoln. The arena draws world-class acts and year-round tourists, and the area has exploded with new restaurants and shops.

The arena and the Haymarket is a hotbed for entertainment and nightlife, Lorenz said. “The area is a magnet to come celebrate and spend some time.”

What can you anticipate at the arena next? More concerts and attractions are on the horizon. And Nebraskans can look forward to events that celebrate Nebraska’s 150th anniversary of statehood. For the latest updates on events and attractions at the Pinnacle Bank Arena, check the website at pinnaclebankarena.com.