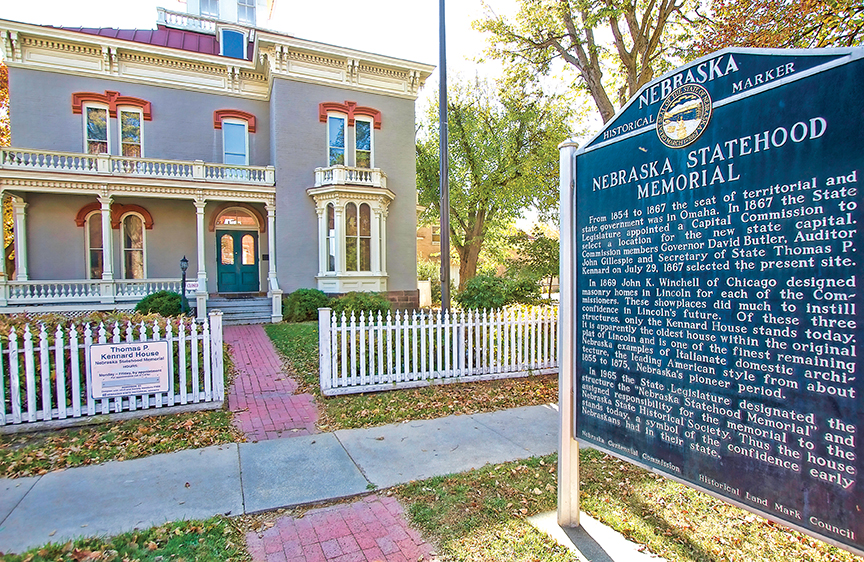 The oldest home in Lincoln, Nebraska stands just down the street from the southeast corner of the Nebraska State Capitol grounds, at 1627 H Street. In front of the handsome Italianate style house with a roof-top cupola is a historic marker which calls the house the “Nebraska Statehood Memorial,” which is surely not what Thomas P. and Livia Kennard called their home when they first occupied it in 1869. But their house has significant associations with the creation of the capital city and of the State of Nebraska.

When the Territory of Nebraska was granted statehood in 1867, Thomas P. Kennard became Nebraska’s first Secretary of State. The legislature soon designated Kennard, Governor David Butler, and State Auditor John Gillespie as the Capital Commission, tasked with selecting a site for the state capital and creating not just a Capitol building, but also a capital city around it. While the selection of the tiny settlement of Lancaster and its transformation into a city are larger stories woven into the fabric of the community of Lincoln, Kennard’s home speaks of more personal events.

Having selected Lancaster, each of the Capital Commissioners made a considerable personal investment in the place, building substantial brick homes. Butler bought 160 acres of land abutting the new city to the southwest and built his mansion at what is now 7th and Washington Streets—about a mile from the new Capitol. Kennard and Gillespie each acquired half of the block bounded by 16th, 17th, H and G Streets, with Kennard building on the north half and Gillespie directly south across the alley, facing G Street.

All three of the constitutional officers employed the same Chicago architect, a young man named John Keys Winchell (1841-1877), because the new community of Lincoln did not yet have resident architects. The homes of Butler and Kennard were very similar in their overall forms, porches, bay windows, and even cupolas. A key difference was that Butler had his brick house covered in a stucco-like material called “Frear Stone,” which was scored to resemble blocks of stone. Kennard used the same patented concrete to form the arches over the windows and doors of his house. At both locations, the Frear Stone weathered poorly. At Butler’s house, the Frear Stone coating was removed, showing the brick walls of the house and making it even closer in appearance to Kennard’s home. At the Kennard House, metal coverings were made for the arches, with a Frear Stone arch still visible only over the front door.

Gillespie’s house lacked the prominent front porch and cupola of the other two houses, but otherwise was similar to them in size and Italianate detailing. Where the homes differed greatly were in the subsequent status of their residents in the community of Lincoln, and in the ultimate fates of the structures.

Establishing the new state government and new capital city were controversial processes, and Governor Butler was impeached, convicted, and removed from office in 1871 for actions associated with the founding of Lincoln. He returned to his home in Pawnee City, Nebraska. In 1877 the legislature reviewed the impeachment and expunged the proceedings from the public record, then in 1882 Butler was elected to the Nebraska State Senate. He died in 1891. His mansion and farmland adjacent to Lincoln passed through several owners before it became the clubhouse of Lincoln Country Club in the early 20th century. When the Country Club relocated in the 1920s, his former home was used as a radio station, grocery store, and briefly as the lodge house of the local chapter of the Ku Klux Klan. Butler’s house was demolished in the mid-20th century and several homes now stand on its site.

John Gillespie served as quartermaster in the First Nebraska Regiment during the Civil War, then as territorial auditor, and was Nebraska State Auditor for three terms, all with markedly less controversy than Butler’s governorship. He also remained a Lincoln resident for the rest of his life. His business activities were varied, including vice president of a daily newspaper, secretary of a stockyard, and finally as a pension agent and attorney. Success seemingly eluded him, however, as the Gillespie house was auctioned in 1886. John’s wife Sarah repurchased it with a mortgage from the State of Nebraska, then in 1887 the legislature passed an “Act for the relief of Sarah D. Gillespie,” forgiving the unpaid mortgage and deeding her the family home. John and Sarah sold the house in 1894 and lived elsewhere in Lincoln until his death in 1897 at age 65. Their house on G Street was replaced with a three story brick apartment house in 1922, which still stands at 1630 G Street.

What of Thomas P. Kennard and his house? He was born in Ohio in 1828, grew up in Indiana, and settled in Washington County, Nebraska Territory in 1857, working as a self-taught attorney. Before Nebraska became a state, he advocated for a state constitution including voting rights for women and a prohibition on capital punishment. Neither concept was adopted but Kennard became Nebraska’s first Secretary of State upon statehood in 1867 and built his Lincoln home in 1869. He and his wife Livia lived at 1627 H Street until her death in 1887. Thomas never remarried and he remained on H Street, but in a new house two doors east at the corner of South 17th.  He was active in civic and business affairs in Lincoln. Kennard outlived his fellow Capitol Commissioners by more than two decades and came to be regarded as the principal founder of the capital city before his death in 1920 at age 92.

Even before his death, Kennard’s original Lincoln home was used as a fraternity house, then later was purchased by William H. Ferguson, whose mansion stands west of the Kennard House. The State of Nebraska acquired both houses in 1961 and the Nebraska State Historical Society undertook the restoration of the Kennard House in 1966-68 as a “Nebraska Statehood Memorial.” It remains under the Society’s stewardship and is open by appointment for special tours.