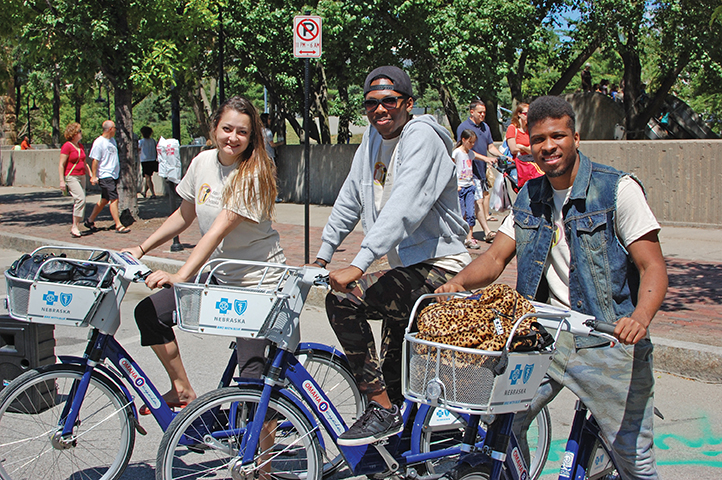 With an extensive trail system, and a new protected bikeway in downtown Lincoln, the Capital City is already a great bicycling community. Now, a new bike share system will enable more residents, students and visitors travel to the city on two wheels! Lincoln hopes to launch the first phase of its bike share program in late summer 2016.

Bike sharing, which makes bicycles available on a short-term basis, has been popular in many cities. Lincoln began planning in spring 2014 when the Association of Students of the University of Nebraska (ASUN) passed a resolution asking the City to explore the idea. That fall, the Lincoln/Lancaster County Planning Department and ASUN co-hosted a bike share workshop, where experts from around the country discussed how bike sharing has worked in other communities and what Lincoln could learn from their experiences.

In March 2015, the City was awarded a Congestion Mitigation Air Quality (CMAQ) grant through the Nebraska Department of Roads for a bike share system. The $600,000 in federal funds requires a 20-percent local match, so the Planning Department began working to generate $150,000 through sponsorships by local organizations and businesses.  The list of sponsors so far includes the University of Nebraska-Lincoln (UNL) and Blue Cross Blue Shield of Nebraska.

Based on the discussion from the workshop, the city decided to start by concentrating its bike share system in the downtown area, home to city and state government and the main campus of UNL. The grant and sponsorships will fund a Phase I system with 100 bicycles and 15 stations. Following the example of other successful programs, Lincoln’s bike share will use a membership system. Users could choose a variety of membership terms from 24 hours to one year. The memberships would allow users to access a bike and ride the first 30 minutes at no additional charge, with a small fee for every additional 30 minutes of use. The goal is to make the entire bike share experience easy, economical and fun.

In September 2013, Mayor Chris Beutler established a policy for the development of Complete Streets to encourage the design and operation of a transportation system that is safe and convenient for all users, including bicyclists.

“It’s important for our community to look at all forms of transportation as we plan for the future,” said David Cary, Interim Director of the Planning Department. “The bike share program will add another component to our investment in our bicycling infrastructure. By providing another option to the automobile, we are reducing vehicle emissions and providing energy savings. Biking is good for our health. And bike sharing gives our residents and tourists a new way to use our trail system and on-street facilities to explore Lincoln from a different vantage point.”

Cary said the City’s investment in bike sharing could help the City move from the bronze to the silver level on the Bicycle Friendly Community list compiled by the League of America Bicyclists. Lincoln is considered one of the top 10 biking cities in the Midwest, and ranks fourth in bike commuting compared with cities of comparable populations. Over 2 million people use the 131 miles of trails annually, and 94 percent of Lincoln residents have access to a trail within one mile of their home. In 2014, the American Planning Association named Lincoln’s trails network as one of the Top 10 Great Public Spaces. The two-way protected N Street bikeway, which runs from Canopy to 23rd streets is the first of its kind in Nebraska.

For more information on the bike share program and on bicycling in Lincoln, visit bike.lincoln.ne.gov.