Don’t expect to be bored in downtown Lincoln 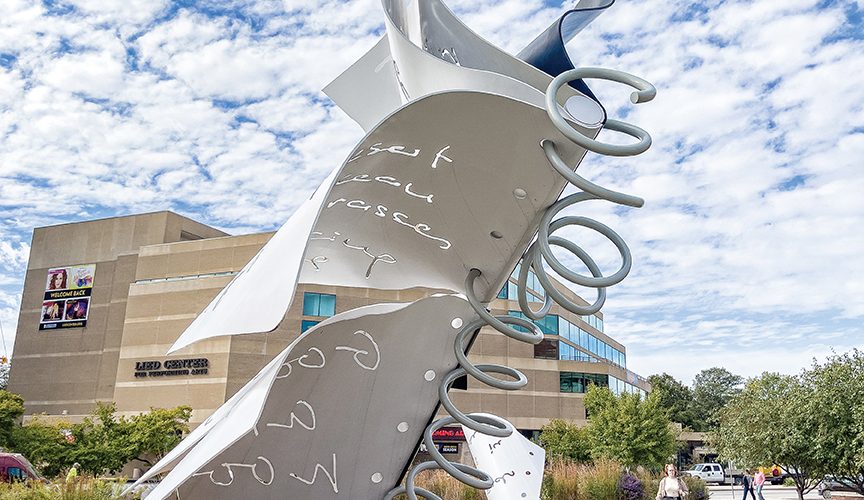 Sure, it’s a Midwestern city without the subways of New York City or the cable cars of San Francisco. But before you turn up your nose, look around and there’s much to do in Nebraska’s Capital City.

Fun and ease and free are operative words. You won’t find crowded sidewalks—except on Saturdays in the fall when a sea of red floods the town and turns Memorial Stadium into the state’s third largest city. That’s when the University of Nebraska Cornhuskers take to the gridiron, and the crowd’s cheering spills beyond the stadium confines onto the rooftop of Barry’s Bar at Ninth and Q streets, where fans without tickets party close to the action.

Downtown Lincoln is a work in progress, with new hotels, restaurants, bars, condominiums, apartments and new businesses appearing every year. Out with the old, in with the new, as no-longer-in-use factories and warehouses get repurposed for today’s needs, much as is happening all over the country. The result is a sense of dynamic and vital energy infusing the city; change is for the better.

“It has its own ecosystem and it’s a true, vibrant, urban lifestyle center,” said Todd Ogden, president and CEO of the Downtown Lincoln Association. One can get that big-city energy without the tangle of big-city traffic. “It’s kind of the best of both worlds,” he said.

Gone are the Miller and Paine and Brandeis department stores that once anchored O Street corners; in their place are boutiques that cater to the stylish, a new Lululemon store, which pairs well with The Running Company for footwear or Threads (Footloose and Fancy) for those interested in comfort and style.

Speaking of exercise, opportunities abound. Walking is an everyday sport for a stroll around the University of Nebraska campus, with lovely gardens outside Love Library on R Street. The campus erupts with youthful exuberance between classes, and you can find sculptures dotting the green space. Or if your preference is for pedaling, you can find 15 stations for the city’s bike-share program, BikeLNK, which offers 100 bikes for rental through a cellphone app. Plus you’ll feel safe riding the pavement downtown on the city’s dedicated bike path that runs along N Street.

Or you can head to Tower Square, 13th and P streets, to view Jun Kaneko’s internally luminated glass sculpture, which burns bright at nightfall.

Every city likes to tout its cultural offerings, and Lincoln is no different. A visit to the downtown is not complete without a stop at Sheldon Museum of Art, 12th and R streets, a stunning Philip Johnson-designed building that houses Edward Hopper’s famous Room in New York and Georgia O’Keeffe’s New York, Night among its collection of mostly 19th and 20th century art. Admission is free, and it is open Tuesday through Saturday, 10 a.m. to 4 p.m.

If you prefer purchasing art to viewing it, downtown is host to several galleries that hold free art walks the first Friday of the month (and sometimes the third Friday too), with the works of local artists and even some pieces by American classics, such as Thomas Hart Benton, at Kiechel Fine Art, 1208 O Street.

Or you can delve into Nebraska history at History Nebraska at 15th and P streets, a museum that will open your eyes to past goings-on of import in the state; open Tuesday through Friday, 9 a.m. to 4 p.m. and Saturdays 10 a.m. to 2 p.m., adults $5, children $3 and under 5 free. Don’t pass up a stop in the gift shop, where you can purchase “Nebraska. Honestly, It’s not for everyone” T-shirts.

While not exactly cultural but certainly lots of fun, The Children’s Museum, 1420 P Street, offers three levels of hands-on learning that makes everyone feel like a kid again. It’s open Thursday through Saturday 9 a.m. to 5 p.m. and Sunday 11 a.m. to 5 p.m. Tickets range from $10.95 to $13.95, and infants up to 18 months are free.

To continue the path to learning, the downtown sports Bennett Martin Public Library, 14th and N streets, the main public library branch. Visitors are welcome to browse or residents can sign up for a free library card to take materials out on loan.

You’ll also find nearby an independent bookstore, Francie & Finch, 130 S. 13th Street, that features the latest bestsellers and holds author talks and signings. For a tantalizing selection of secondhand books, head for A Novel Idea Bookstore, 118 N. 14th Street. You won’t be disappointed.

If all this walking around and exploring makes you hungry and thirsty, you won’t be at a loss for finding whatever appeals to your palate. Among the 118 bars and restaurants, offerings range from sushi to smoothies, ramen to kebabs, poke bowls to prime rib sandwiches, Caribbean to Thai to Indian to Middle Eastern to Chinese fare as well as everything in between, from burgers, barbecue and pizza to fine dining. A strip of watering holes beckons on O Street, and some downtown establishments don’t cater to a strictly student crowd, such as Boitano’s Lounge in the relatively new The Kindler hotel.

The Haymarket, a historic area to the west of Ninth Street, treats visitors to an array of restaurants and bars as well as boutiques, coffee shops, art galleries, antiques shops and the Pinnacle Bank Arena, a showcase building that is worth walking around just for the look of it. You’ll also find the Railyard, an entertainment district with a giant screen that displays free movies and sports events and an area that converts to an ice-skating rink in the winter. When it’s not so cold, you can encounter the welcome chill of handmade premium ice cream at Ivana Cone, 701 P Street.

Oh, lest this seem too urban a setting, downtown brings the country in with a farmers market in the Haymarket at Seventh and Canopy streets from 8 a.m. to noon Saturday mornings starting in May and ending in October. There you’ll find fresh produce and plants, flowers and frozen burritos, baked goods, kettlecorn, and arts and crafts items, including handsewn onesies, jewelry, soaps and lavender creations, among others. Grab a cup of coffee and maybe a kolache or two.

Downtown Lincoln has become a hub for tech companies who find the rents here preferable to Silicon Valley. With these young entrepreneurs comes an energy and innovative thinking that keeps the city on its toes.

The upcoming renovation of the Atrium promises a new sort of workspace, Ogden said, so that a hybrid workforce can live and work close-in and have places nearby for coffee breaks and meals. Also on the drawing board is a new convention center to offer support to the eight hotels located downtown, and the redevelopment of Pershing Center brings more housing and community space as well as the possibility of a new main library, should a bond issue be approved by Lincoln voters.

New, too, is the development of the Telegraph District, home of the Nelnet and Allo Communications offices, on downtown’s eastern edge, with The Mill Coffee and Tea, Lotus House of Yoga, Subway and the relocated Lincoln Journal Star.

On the oldie but goodie list is the 1932 Nebraska State Capitol, a Bertram Goodhue-designed building that marks the high point in city architecture at nearly 400 feet. The art deco décor, floor mosaics and murals are clearly worth seeing. The building, at 1445 K Street, is open every day of the year, and free tours are held multiple times every day.

There’s nothing staid about a stay in Lincoln. A day’s stopover doesn’t leave time to see and do all there is to see and do. You’ll be surprised. Sometimes the joy is where you least expect it.