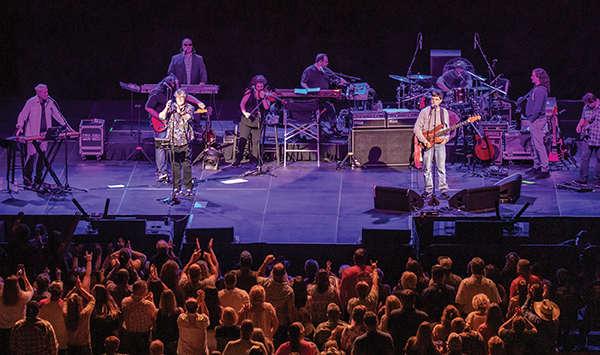 It looks out of place, a round, green-tinted glass and silver structure next to a substantial, linear United States Postal Service main branch directly to its east. But the Pinnacle Bank Arena, a relative newcomer to the area, is the linchpin of Lincoln’s Historic Haymarket District, an up-and-coming, all-encompassing entertainment district.

Shiny and modern among the refurbished brick warehouses and factories that dot the district, but akin to the updated hotels, lofts, restaurants and bars that are its nearest neighbors, the 16,000-seat Pinnacle Arena maintains its star status.

Where else in Lincoln would Sir Paul McCartney or Sir Elton John serenade a packed auditorium with their famous tunes? McCartney even warranted a temporary street name change, as Abbey Road signs outside the arena welcomed the Brit and excited concertgoers.

From Canadian crooner Michael Bublé, who inaugurated the arena’s musical offerings when it opened in 2013, to 2021’s USA Wrestling Senior Team World Trials, the state-of-the-art arena has provided all sorts of entertainment to satisfy the interests of diverse audiences. From rodeos to monster trucks, from Cirque du Soleil to the Harlem Globetrotters and from Disney on Ice to Sesame Street Live, the arena brings in the crowds.

Until the Pinnacle Bank Arena arrived on the scene, top-notch shows skipped the Capital City and booked at Omaha’s CenturyLink venue, said Tom Lorenz, arena general manager. Not anymore. A whole new opportunity to see spectacular entertainment was at the doorstep, and folks responded. “The people of Lincoln and Lancaster County have embraced us and supported us since Sept. 13, 2013,” he said, noting that the economic impact of major events at the arena radiates throughout the city at hotels, restaurants, bars, shops and other businesses that small-town visitors take advantage of while in Lincoln.

That it was built to accommodate such versatile forms of amusement makes the arena attractive to so many entertainers. Its easily converted floor space and large loading bays that allow multiple trucks to drive inside at the same time make the setting up of shows with their sophisticated lighting and audio equipment and complicated staging backdrops easier than some older venues. The Trans-Siberian Orchestra, for example, holds the record, with 35 trucks deployed to load and unload for the group’s performance.

But that’s all behind the scenes. Up front and center have been some of the major names in musical fame: Pink, Cher, Maroon 5, Bob Dylan, James Taylor, Garth Brooks, Neil Young, Sheryl Crow, Jay-Z, Alabama, Lil Wayne, the Eagles, Miranda Lambert, Katy Perry, The Weeknd and Justin Bieber, many of them playing more than once. The list of who’s who in the music world who came to town goes on and on. These superstars put Lincoln on the where-it’s-at map. Eric Church, who holds the concert attendance record of 15,752, and Elton John returns in 2022. They, too, like the arena.

Comedians, such as Jeff Foxworthy, Joe Rogan and Lincoln’s own Larry the Cable Guy, have graced the Pinnacle’s stage, bringing in audiences that prefer laughing to belting out familiar tunes with famous performers on stage.

And there’s more. The arena replaced the Bob Devaney Sports Center as the home of the University of Nebraska’s men’s and women’s basketball teams, bringing avid Cornhusker fans to the space for a season of competitive play. It also plays host to state high school championship matches in girls and boys basketball and girls volleyball; the three-day boys basketball tournament, for example, has brought as many as 65,000 spectators to the arena.

For the first time in 2021, the arena played host to the Big 10 men’s gymnastics event, and it has the Big 10 wrestling championships scheduled for March 2022. And the esports event the arena hosted for the first time during the 2021 Cornhusker State Games attracted 500 gamers, the largest single sport of the games.

Whether to watch sports or to attend a concert, guests occupy executive suites, loge boxes, club seats or private lounges and take advantage of many concession stands that serve munchies and alcoholic beverages. And there are easily accessible restrooms aplenty.

During intermission or before a show, the open-air roof deck offers visitors a breath of fresh air with a view of the surrounding area from on high. Even the State Capitol and Memorial Stadium greet the naked eye.

The arena’s versatility was called into play during the COVID-19 pandemic, when live performances halted abruptly. In their place, upwards of 150,000 Lincoln residents filed through the doors for vaccinations administered by a host of health care professionals at 27 public clinics. As many as 8,000 people came through on a single day.

On a regular basis, the space is used for University of Nebraska Lincoln college graduations—actually the first arena event in August 2013—and local high school seniors, UNMC dental and nursing college graduates as well as those from Southeast Community College also picked up their diplomas there. From job fairs to Jehovah’s Witness district conventions, the arena fills multiple purposes.

Community groups also fill the space for fundraisers and for social events. The Mayor’s Arts Awards celebration has found a new home there, and Project Connect runs an annual gathering to introduce the homeless and near homeless to social service organizations.

A satellite entertainment venue of sorts, Pinewood Bowl in Pioneers Park, hosts entertainers in an outdoor setting that is smaller but no less attractive to performers. In fact, the American Ballet Theatre began its eight-city, summer road tour in 2021 with a free performance before an audience of nearly 6,000 on a delightful July night. (When a storm threatens, a hasty retreat to the Pinnacle Arena saves the day.) Others who have performed since 2012 under the stars surrounded by evergreens include Bonnie Raitt, Willie Nelson, the Avett Brothers, Ringo Starr, Paul Simon, the Lumineers and Lynyrd Skynyrd, to name a few. No slouches here!

Parking in an attached garage as well as in others nearby marked by numbers and primary colors makes access to Pinnacle shows and events easier. Also easy on the pocketbook in these Park&Go facilities is that the first hour is free. Before and after, food and beverage choices abound, as restaurants and bars ring the arena. You can park once and look forward to a full night’s entertainment, sort of like one-stop shopping.

“Our motto has always been ‘come early and stay late,’” said Lorenz. And many do.

And, yes, there is a Pinnacle Bank branch nearby, with an ATM in case you run out of cash.