Like it’s new Climate Action Plan, Lincoln is one of a kind 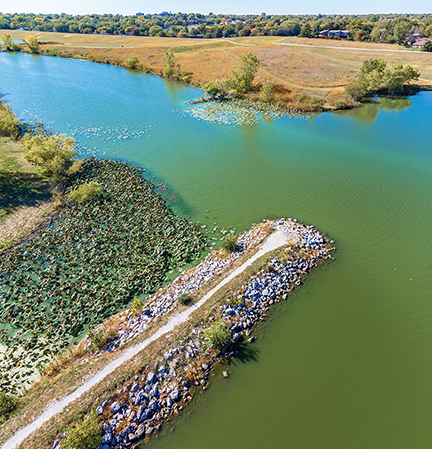 It was a rainy evening last March.

After three-and-a-half hours of tense public testimony inside Lincoln’s County/City building, a lone voice resonated through the chamber.

“We can’t just make things up as we go and figure it out. We have to have a plan and a strategy and a vision.”

That voice belonged to Miki Esposito. As the senior policy advisor on climate for Lincoln Mayor Leirion Gaylor Baird, Esposito captured both the urgency and opportunity of our local and global environmental crisis. So she suggested a way forward, asking Lincoln’s City Council to approve the city’s first-ever Climate Action Plan. Ultimately, they heard her, passing the plan on a six to one vote.

This is all part of a comprehensive 176-page report titled Lincoln’s Vision for a Climate-Smart Future. The report identifies our city’s climate vulnerabilities—like flooding, drought, a single water source, public health, auto-reliant transportation, and fossil fuel dependency—as well as what we can do about them.

While there’s much that remains undone, Lincoln does not start from scratch. In recent years, the city has achieved several environmental breakthroughs, including:

Still, what will Lincoln be like in the future? Put simply, hotter and drier with increasingly variable and intense rainfall. Projections are for mean average temperatures to increase from 52°F to 57°F and a 15-30% increase in heavy precipitation days statewide. And with Lincoln expected to add 48,000 households by 2050, the need to plan for future scenarios, particularly those around water supply, is acute.

This is what Lincoln Transportation and Utilities Director Liz Elliott does.

“We’re going to have to build additional infrastructure for water storage. We have to make sure we can store and treat enough water so during those months or years of drought we have enough water to provide to the community,” said Elliott.

Lincoln’s water supply comes from groundwater wells along the Platte River near Ashland. According to a 2014 Lincoln Water System report, those wells will struggle to meet demand by mid-century. A key element in the climate action plan is to develop a strategy to secure a second source of water. But doing so will not come easy or cheap. Possibilities include expanding the current wellfield, interconnecting with Omaha’s Metropolitan Utilities District into the Missouri River or a to be determined means.

Conversely, too much water is also a problem. Salt Creek is the receiving stream for all the runoff generated within the city and is surrounded by residential, industrial and commercial property. The action plan incorporates key suggestions of the Salt Creek Floodplain Resiliency Study. These include the possibility of zoning changes, voluntary buyouts, setbacks and riparian preservation that enhance flood risk reduction through natural and engineered solutions. Like a firefighter hooking up to a hydrant and not knowing if a trickle or torrent will emerge, planning for our water future is full of uncertainty.

This foresight is really where we stand out. While climate change is already impacting Nebraska—and will accelerate—Lincoln is the only city in the state with a climate plan. In 2019 and 2020, 100 community members voluntarily led the Climate Resilience Task Force who, together with city employees, whittled over 600 ideas into 120 action items. This level of civic engagement is Lincoln’s winning hand.

Lincoln Mayor Leirion Gaylor Baird recently delivered her 2021 State of the City Address. In it, she noted how resilience is already part of the city’s ethos.

“So much of our work at city hall is about creating opportunities out of challenges.”

Climate change may be the greatest canvas of all to apply this principle.