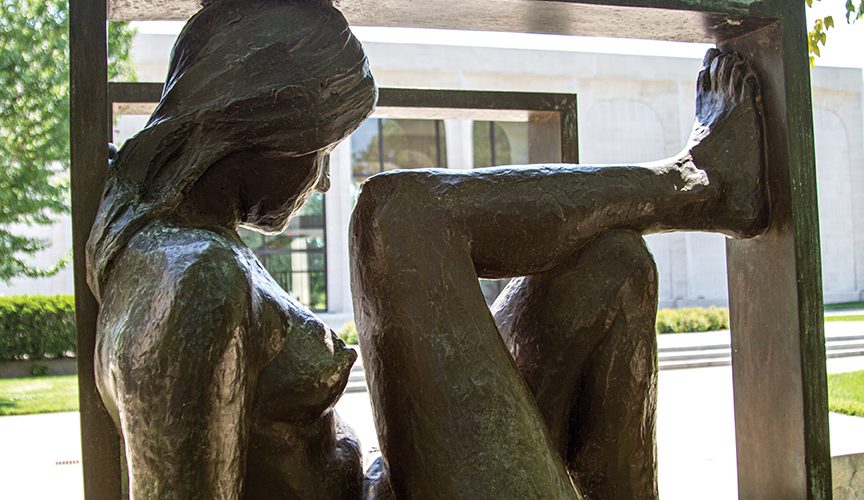 In the Star City there are so many things to do and see. Among them are a number of landmarks, historic and otherwise. Below is a list of landmarks which we like and feel are worth visiting, ranked in no particular order.

If visiting on a non-game day and would like to take some pictures, the number one photo op on campus is the Legacy Statue on the east side of the stadium outside Gate 20. It commemorates Nebraska’s five national championships and portrays five Husker defensive players tackling a ball carrier. The second most popular place for taking photos: a statue of former Nebraska Head Football Coach Tom Osborne standing alongside former quarterback Brook Berringer located on the north side of the Stadium.

“This is so much more than a Hall of Fame, and especially more than a museum. It’s an exhibit hall that combines interactive activities with meaningful learning experiences…devoted entirely to preserving the rich history of high school athletics (not NU) in our state!” —Chuck Johnston, Executive Director of the Nebraska High School Sports Hall of Fame

Although Husker football is top of mind when it comes to sports in Nebraska there is more, especially when it comes to high school athletics.  Located near Haymarket Park at 500 Charleston St., is the Nebraska High School Sports Hall of Fame Foundation. A non-profit that has operated for more than 20 years, it offers a great museum full of memorabilia, in order to preserve the history of high school sports. The accomplishments span the entire state and deserves both respect and appreciation.

Originally an actual hay market, Lincoln’s Haymarket district is one of the main tourist attractions for both visitors and locals. The area is home to the Haymarket Park baseball stadium where the Salt Dogs and the University of Nebraska–Lincoln’s baseball team play. The Haymarket is also home to the Farmers’ Market, great restaurants, coffee houses, art galleries (along with their First-Friday Gallery walks), housing and retail shops. The Pinnacle Bank Arena is also located in the Haymarket. The arena is a state-of-the-art facility seating over 15,000 people and bringing in world-class performers and UNL’s basketball activities.

Established in 1963, Pioneers Park Nature Center is a 668-acre nature preserve with eight miles of hiking trails located at the intersections of South Coddington and West Van Dorn streets. Serving the Lincoln area as an environment education center and a wildlife sanctuary, the Nature Center is a great place to visit year-round.

You can walk the trails through the prairie, view exhibit animals, listen to the birds in the bird garden or enjoy the scents of the herb garden. You can also visit two buildings that house hands-on and small animal exhibits. Children can dig, climb and build in The Edna Shield’s natural play area. There’s also a beautiful and instructive prairie, bird, children’s and herb gardens with a variety of labeled specimens.

Older than the city of Lincoln and now open to the public, Robber’s Cave is Lincoln’s only underground attraction. Joel Green, author of Robber’s Cave: Truths, Legends, Recollections, leads tours through the sandstone tunnels highlighting legends, including use by Central Plains Indians, Jesse James, and the Underground Railroad, and factual uses by Lincoln’s first brewery, Coxey’s Army, and the Ku Klux Klan. Green also includes entertaining anecdotes he has collected from guests. For more information visit www.robberscavetours.com or call 402-975-0598 to book a tour. The cave is open year-round 7 days a week!

For more information on exhibitions and events visit sheldonartmuseum.org.

Constructed as a private residence by William
Henry and Myrtle Ferguson between 1909 and 1911, the Ferguson House is located in downtown Lincoln at 700 S. 16th Street It is one of the best examples of Second Renaissance Revival architecture in the area and is also listed on the National Register of Historic Places.

The Ferguson House hosts an annual Holiday open house on a Sunday in early December, the same day as the Tree Lighting Ceremony at the Capitol, when the public can tour through the entire house.

Regular tours are not provided to the public because it is a working office building. However, the outside grounds are always open to the public, and you can stroll around the building and the carriage house. You can also look on the first floor, during regular office hours, provided a private event is not scheduled. Call 402-471-5417 before visiting or take a virtual tour by visiting environmentaltrust.nebraska.gov/about/ferguson2016.html.

Located at 4900 Sumner Street alongside the Bryan Medical Center, Fairview was constructed in 1902–1903, and became a National Historic Landmark some 60 years later. The house itself is significant because it was once called home by its namesake, William Jennings Bryan (1860 to 1925), an important American politician, congressman and presidential candidate, who served as President Woodrow Wilson’s Secretary of State. The ground floor is open to the public and free guided tours can be arranged. For more information, or to schedule a tour, call 402-481-3032. Please schedule tours at least 48 hours in advance.

The most historic structure still standing in Lincoln, the Thomas P. Kennard House, was built at the end of the 1860s as the official residence of the state’s first secretary of state. Now open to the general public, with a Victorian ambiance, period antiquities and old paintings, it is sure to delight. During your visit you’ll also learn all about the creation and early days of Nebraska’s state capital. The Thomas P. Kennard House is located on 1627 H St. and is open Monday to Friday – by appointment. To schedule a tour, call 402-471-4764.

The last entry on the list is not a landmark but a unique way to explore Lincoln on multi-pedal trolley bikes, which can seat up to 15 people. The tours  are led by professional, knowledgeable, and friendly guides who have a passion for the city and pepper their tours with interesting information. Tours are usually 2 hours in duration, and include stops at local pubs and restaurants and other famous landmarks. However, tours can also be customized to guests’ needs and bikes can be reserved for private tours or special celebrations.  Visit grouptherapybiketours.com for more information.

We really hope you get a chance to visit some, if not all, of our favorite landmarks.