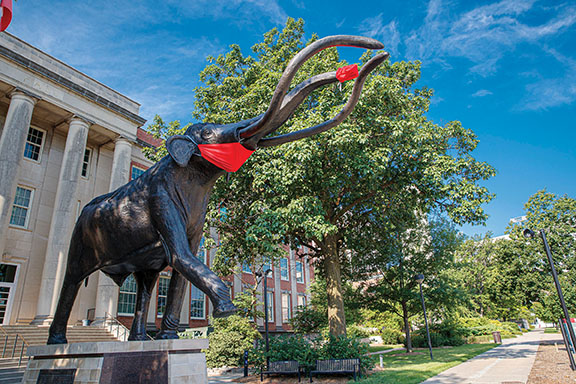 Archie the mammoth sculpture wears a mask outside of the University of Nebraska State Museum in Morrill Hall. The sculpture is one of many UNL campus sculptures wearing masks. July 6, 2020. Photo by Craig Chandler / University Communication

The University of Nebraska State Museum

In June 1871, a few fossils, minerals, and some taxidermy were placed in a museum collection cabinet to preserve our state’s heritage and educate Nebraskans; thus began the University of Nebraska State Museum (UNSM). Today, 150 years later, the Museum is home to more than 13 million artifacts, including the world’s largest fully mounted mammoth fossil (affectionately known as “Archie”), the second largest vertebrate mammal fossil collection in the nation,  archeological objects documenting more than 13,000 years of Native American living on the Great Plains, and the fourth largest scarab beetle collection in the world.

The museum’s early directors each added a few specimens to the collection. But UNSM’s research growth and reputation really began with the arrival of Dr. Erwin H. Barbour in 1891. Hired as a professor of geology, he brought with him a collection of minerals and fossils from his summer expedition in northwestern Nebraska. Realizing many of Nebraska’s fossils were being removed and taken to museums out East, Barbour began personally funding museum expeditions, adding the finds to UNSM’s collection. Then, in 1893, Regent Charles Morrill began a long friendship with Barbour. Morrill offered to personally fund the museum’s paleontology expeditions. His patronage resulted in the excavation and addition of the collection’s first larger vertebrate fossils. A Titanothere skeleton from their 1894 expedition remains on display today.

But both Morrill and Barbour wanted more. They dreamed of building a natural history museum on campus that would be considered one of the greatest in the United States. By the early 1920s the research collections were being housed in a building deemed condemned as a fire trap. Morrill continually lobbied university chancellors and the legislature for a new, dedicated museum building. He even promised to donate additional money should funding be approved. Finally, in June 1925, thanks in large part to advocacy from Chancellor Avery, Barbour and Morrill’s wish came true. Nebraska’s unicameral approved $300,000 to build a new museum in the heart of the university campus.

Barbour and the museum designer developed an idea for a large display hall to tell the story of ancient elephant evolution. Nebraska is renowned for its treasure trove of fossil elephants; to date, elephant fossils have been recovered from 90 of 93 counties. In September of 1925, Barbour wrote to Morrill saying the plan for the exhibit was “the great feature of the whole building. Your big elephants are to be up in this hall.” Barbour successfully petitioned the Board of Regents to name the Museum in honor of his friend. Morrill Hall opened to the public in May 1927.

“Dr. E.H. Barbour believed passionately in educating youth and the power of museum exhibits to inspire curiosity in children about the natural world,” said current UNSM director Susan Weller. “He was even the first tour guide of the new museum.”

Visitors to Morrill Hall can experience Barbour’s vision of elephant history displayed today as four-tuskers, mastodons, and mammoths parade through time in the iconic Elephant Hall. A Smithsonian affiliate since 2013, Morrill Hall also offers variety of family-friendly science and anthropology exhibits and programs. The First Peoples of the Plains explores the history, traditions and cultures of the Native Americans of the Great Plains who contribute to Nebraska’s vibrant culture today. Visitors can also learn the story of Nebraska’s ancient inland sea in the Mesozoic Gallery, immerse themselves in Nebraska’s landscapes in the Hall of Nebraska Wildlife, or explore the Universe in the Mueller Planetarium. In 2019, Morrill Hall opened Cherish Nebraska, an entire floor dedicated to celebrating the science and culture of Nebraska’s past and present. A five-foot digital Earth discusses Nebraska’s past and current climates and our global biodiversity connections. This Smithsonian-inspired renovation includes a working Visible Lab where visitors can watch UNSM’s researchers as they prepare museum specimens.

The UNSM also serves as a community cultural asset going beyond Morrill Hall’s four walls to serve the entire state. More than 25,000 elementary students visit Morrill Hall annually for field trips; thousands of others interact with museum educators and UNL scientists through virtual field trips and digital learning experiences. The museum has supported science education in all ESUs and staff received a Nebraska Distance Learning Award for innovation. When Covid-19 hit in the spring of 2020, UNSM expanded its education program and provided free virtual science activities, videos, and interactive field trips which were enjoyed by families across Nebraska, the United States and 47 other countries.

“As Nebraska’s State Museum, we strive to promote discovery of our world and world cultures,” said Weller. “We remain committed to our founding principles—research and educational access. We look forward to the next 150 years as we embrace new technologies to support curious Nebraskans wanting to know more about their world.”

Morrill Hall is open to the public on the University of Nebraska-Lincoln’s City Campus. Visitors can find information about operating hours and tickets at museum.unl.edu.