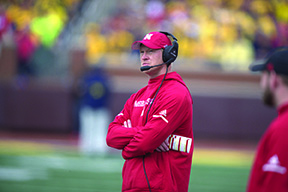 Those words from the University of Nebraska school song perhaps explain better than any other words why Scott Frost returned to coach the Nebraska football team, and why he’s destined to excel.

Where else would some 200 of your old friends welcome you, in person, upon your return to your home state for a new job?

Where else would your new boss reference you as the state’s “favorite son” in his introductory remarks?

Bill Moos himself is relatively new to Nebraska, less than a year on the job as Nebraska’s Director of Athletics. Yet even Moos understood the importance, the significant impact Frost would have in unifying an entire state when he witnessed the aforementioned friends—Frost’s former teammates from his playing days at Nebraska—waiting in the Nebraska weight room, ready to surprise Frost, literally with open arms.

“That choked me up,” Moos said.

Of course, Frost isn’t coaching Nebraska just because he’s from Nebraska. He’s regarded as one of the top young coaches across the nation in the Football Bowl Subdivision ranks, having led Central Florida from unwatchable to unbeaten in a mere two years. As Moos said, Frost topped the coaching candidates list of many athletic directors looking for football coaches last December.

“I got the pick of the litter,” Moos said.

But why is Frost—other than his Wood River zip code as a youth and a coaching pedigree as an adult that includes legendary names like Tom Osborne, Bill Walsh, Mike Tomlin, Bill Belichick and Tony Dungy—regarded as a perfect fit for this job, a can’t-miss prospect?

Simply put, Frost gets it.

Frost first learned and understood the values and beliefs of Nebraskans long before he became a Husker football player. At Wood River High School, both of his parents, Larry and Carol, coached him
in football – Larry the head coach, Carol the receivers coach.

Larry played halfback at Nebraska under Bob Devaney from 1967-69. Carol became the first female Olympian from Nebraska and placed 14th in the discus in the 1968 Mexico City Games. A student at UNL, she trained most evenings by running nearly two miles to a makeshift discus and shot put ring on the old Nebraska State Fairgrounds because Nebraska sanctioned no women’s sports before the days of Title IX.

“They’re both tremendous coaches and educators,” Frost said of his parents, “and I’ve learned a lot
from them.”

At times, you’ll still see Larry and Carol attending Nebraska practices, watching from seats in a narrow balcony hovering over the Hawks Championship Center indoors practice facility. During fall camp, when the team stepped outside to practice, Carol would pull out the stopwatch and time her grandsons running 40 yards on the indoor FieldTurf. That’s no surprise, really, given she recorded Scott’s 40-yard dash times… beginning when he was two, and then again every year until he graduated from high school.

Frost succeeded as a well-rounded student and athlete at Wood River High School, where he played trumpet and participated in class plays in addition to being a three-sport athlete. He set multiple state football records playing quarterback, excelled at point guard in basketball and won a state gold medal in the shot put.

That explains why Frost understands the impact players from small-town Nebraska have on the Husker football program, and the impact the Nebraska program has on small-town athletes. It’s the latter impact Frost worries may have waned over the last decade or so, and he’s headstrong on returning that sense of pride and sense of ownership.

“When you have a bunch of kids from the state of Nebraska that are in this program, those are the type of players that would bleed for this place and are going to work hard to make this work,” Frost said. “Guys that are really pulling for Nebraska. When I was growing up, every kid in the state of Nebraska dreamed about running out here on this stadium, on this field wearing a red ‘N’ on their helmet. There’s too many kids from this state right now playing at other schools and we are going to do everything we can to make sure that those kids are here.”

As a nod to small towns, Frost will make vague, out-of-the-blue references to places like Shelton and Malcolm and Gothenburg and Minden and Scottsbluff and so on. When discussing lack of quarterback depth in fall camp, Frost referenced walk-on Matt Masker, and how it wasn’t ideal having one of his three most-experienced quarterbacks be a true freshman, who, just months ago, was playing in the Lou Platte Conference.

Recent Nebraska football coaches probably wouldn’t have been able to connect Masker’s high school, Kearney Catholic, with its former conference affiliation (the school had left the conference while Frost was at UCF). Sure, that seems trivial on the grand scale. But it’s one of those “little things” you’ll hear Frost frequently mention, and yet another sign of Frost’s pure love and passion for his job, his school and his state.