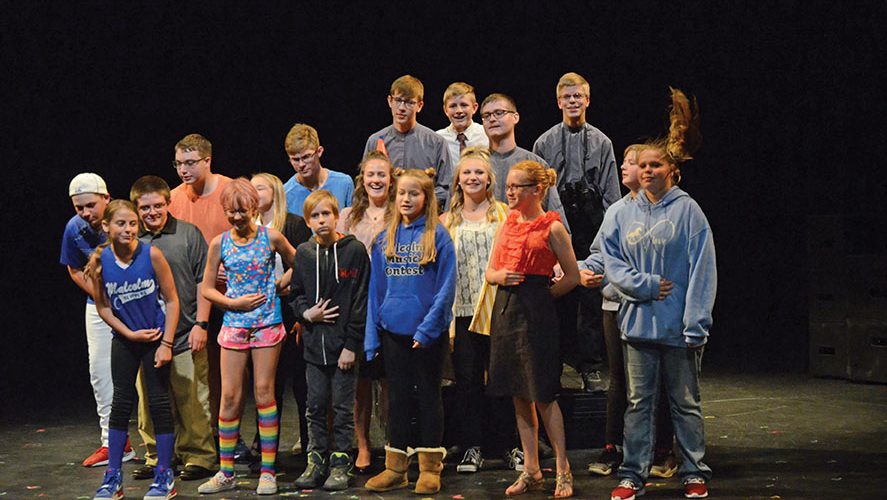 Summer in Lincoln is filled with performing arts from the first day of May through the end of August. Outdoor concerts join outdoor theater, but plenty of air-cooled venues are available as well.

Pinewood Bowl’s July musical is legendary and is staged in the lush setting of Pioneers Park at 3201 S. Coddington St. Productions began with Faust and Pirates of Penzance in 1949 and have been providing summer family entertainment since. The 71st annual musical will be the toe-tapping Cole Porter favorite Anything Goes, which is set on an ocean liner bound for England. Billy Crocker has fallen in love at first sight with a beautiful young woman he met in a taxi and stows away in hopes of winning her heart. Evangelist-turned-nightclub-singer Reno Sweeney is traveling aboard the same ship along with second-rate gangster “Moonface” Martin and his girlfriend, Bonnie, who disguise themselves as a minister and missionary. What could go wrong? Everything, of course. Pack your picnic and your blanket and enjoy theater under the stars. For more information visit pinewoodbowl.org.

Flatwater Shakespeare Company, created by Bob Hall and the 2001 cast of Twelfth Night, features some of Lincoln’s finest actors. Selecting one of Shakespeare’s best-loved plays, Flatwater Shakespeare begins its summer season with performances at the open-air Stables at Wyuka Cemetery at 3600 O St. and then goes on the road, taking the show to venues across the city including Lincoln Community Garden, James Arthur Vineyards, Pioneers Park Nature Center and the Railyard’s Canopy street, as well as city parks including Henry, Cooper and Holmes. Twelfth Night will be performed once again in 2020, June 4-21, preceded by Romeo and Juliet in March and followed by King Lear in September/October. Throughout the summer, Flatwater also hosts Little But Fierce, a workshop focusing on Shakespeare for youth. For more information and the performance schedule for 2020, visit flatwatershakespearecompany.org.

If you relish comedies and musical revues, TADA Theatre has a season made just for you. TADA is noted for its Midwest premieres of musicals including Forbidden Broadway and Gilligan’s Island the Musical, and invites you to sit back and relax as you laugh and sing along to well known musicals in summer 2020. TADA is in the Creamery Building at Seventh and P streets in Lincoln’s Haymarket. For more information, call 402-438-8232 or visit tadaproductions.info.

The Angels Theatre Company is a group of performing artists who collaborate to create engaging theater to promote artistic growth, foster community relationships and raise social awareness. According to Artistic Director Judith K. Hart, The Angels Theatre Company is offering staged performances of new plays created by the members of its Play Writing Collective. 2020 will mark the sixth new works series called First Flight Festival. The festival features plays or monologues each shorter than 20 minutes and written by members of the collective. Watch for July dates and more detailed information about when and where at angelscompany.org.

The Lincoln Community Playhouse, or LCP, as the locals refer to it, is another long-time tradition on Lincoln’s theater scene. Located at 2500 S. 56th St., LCP presents everything from tried and true musicals to theater for families. Kicking off Summer 2020, LCP produces a West End and Broadway favorite, Roald Dahl’s Matilda the Musical, April 24-May 10. Matilda is a little girl with astonishing wit, intelligence and psychokinetic powers. She has courage and cleverness in equal amounts, and could be her fellow pupils’ saving grace. LCP also offers a broad range of outreach activities and classes for all ages, including the Penguin Project, which pairs young artists with developmental disabilities including Down syndrome, cerebral palsy, autism, intellectual and learning disabilities, visual or hearing impairment and other neurological disorders, with a dedicated group of volunteer peer mentors—children the same age without disabilities who work side by side with them through four months of rehearsals and the final performance. This year’s project is Penguin Project: Roald Dahl’s Willy Wonka Jr., June 5-14. To get a performance schedule, class and ticket information, call 402-489-7529 or go to lincolnplayhouse.com.

Summer 2020 at Theatre Arts For Kids will include classes in musical theater, scriptwriting, singing, acting, dancing and more. Shows for Rising Stars (ages 3-8) will be featured in weeklong performance workshops. The grand finale of the TAFK summer will be Aladdin Jr. (ages 7-15). Look for more information at TAFK.org.

The Haymarket Theatre and Nebraska Youth Theatre keep very busy in the summer months with workshops and classes that result in public performances. According to the Haymarket staff, “… we work hard on the performance, getting top-notch instructors to teach acting, dancing, singing and all the other skills associated with the theater, but we also try to maximize the opportunities to learn life skills that can be applied offstage … Every performance by the Nebraska Youth Theatre represents a lot of individual creativity, hard work and bravery from every member of this cast.” The Haymarket Theatre is in its new home at 4815 S. 14th St. Call 402-477-2600 or visit haymarkettheatre.org.

Just a few miles north of Lincoln is another summer tradition, the Mahoney Melodramas. Since 1993, from May to August, families have been treated to a night of booing and throwing popcorn at the villain and cheering on the heroine, who is always in need in need of saving. For a complete schedule, visit melodrama.net.

Other area theaters producing during the summer months include:

Beatrice Community Players, 40 miles south of Lincoln on U.S. 77. Join them May 29-June 14 for the ABBA musical Mamma Mia! a tale of a young woman’s search for her birth father so he can walk her down the aisle. Visit beatricecommunityplayers.com.

In Hickman, just 10 miles southeast of Lincoln, is a new company, The Stage Theater. Their latest productions may be found at thestagetheater.com.

About 40 miles east, near Manley, Nebraska, is The Lofte Community Theatre at 15841 Manley Road. Summer offerings are Life With Father, by Howard Lindsay and Russell Crouse, billed as the “greatest dramatic hit of modern times,” May 29-June 7; and Hello, Dolly! Michael Stewart and Jerry Herman’s musical bursting with humor, romance, high-energy dancing and some of the greatest songs in musical theater history, July 18-August 2. For tickets and more information call 402-234-2553 or visit Lofte.org.

The Olde Glory Theatre in a repurposed church in Seward at 348 Jackson Ave. is just a quick trip from Lincoln. Its May/June 2020 fare features the Goehner Centennial Players Annual Melodrama. To purchase tickets go to oldeglorysewardne.com.

For a full list of productions throughout the year, visit the Lincoln Theatre Alliance website at lincolntheatrealliance.org and “Appearing Locally” at appearinglocally.com.