The Lincoln Community Foundation — All of Lincoln benefits 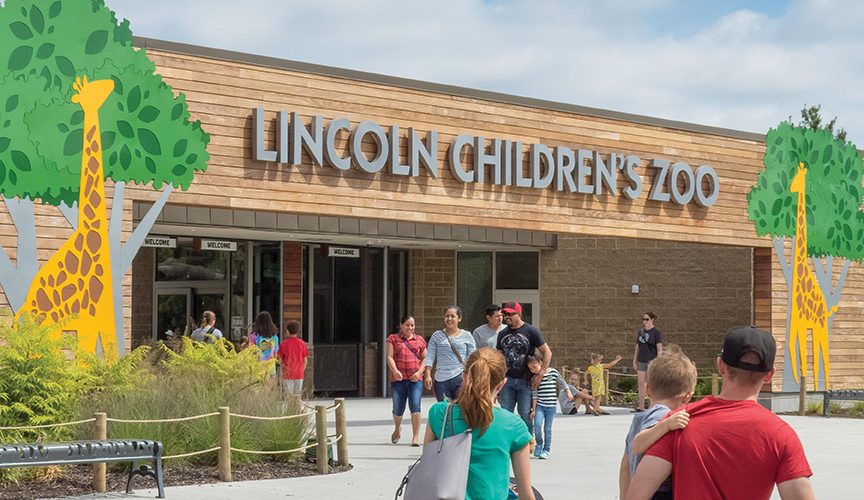 There’s a lot to cheer about this year at the newly expanded Lincoln Children’s Zoo, including a giraffe-feeding experience, up-close tiger encounters, a splash pad, and an indoor adventure center. Donors to the Lincoln Community Foundation provided support for the Love Your Zoo Campaign to help make this 10-acre, $24 million expansion possible.

Visitors to the Lincoln Children’s Zoo will enjoy these new exhibits thanks in part to the generosity of people who call or have called Lincoln home. The foundation contributed $200,000 to the zoo expansion through the Sheila Dickinson Dinsmore Graf and Kenneth J. Good funds. Now, the new giraffe habitat allows children and adults alike to interact with these tall creatures and even feed them snacks.

The expansion also welcomes tigers Kumar and Axl, who came to Lincoln by way of San Diego. Patrons can enjoy several viewing and encounter areas and watch zookeepers work up-close and personal with these amazing, endangered cats.

Guests to the Lincoln’s Children’s Zoo are welcomed through new entrance gates into an outdoor plaza that includes a Splash Stream where children can cool off during hot summer days. The stream incorporates fun and discovery; kids (and adults) can wade, play and cool off.

The zoo also features multiple offerings open to the public during winter months, including an indoor animal and play area. A trio of spider monkeys—Aliena, Carlos and Lola—live in the play structure in the center of the building. Their glass-enclosed habitat is right next to the 24-foot “tree climber,” so adults and children of all ages can scramble and climb side by side with their furry friends.

Grant work through the Lincoln Community Foundation is made possible by generous donors and helps build and sustain the city of Lincoln. Lincoln Children’s Zoo Executive Director John Chapo and his wife, Tracie, are members of the foundation’s Legacy Society.

“My wife is an educator and I’m a nonprofit guy. We aren’t wealthy people,” said John Chapo. “But we can leave something to this community for the future.”

Several other Lincoln landmarks have received support through the foundation. In commemoration of its 60th anniversary a few years ago, it invested in Lincoln’s downtown civic space. The Lincoln Community Foundation Tower Square at 13th and P streets features a public plaza and glass tower, Ascent, designed by international artist and Omaha resident Jun Kaneko. In addition, the foundation created an endowed fund through the Sheila Dickinson Dinsmore Graf Fund to provide continuing maintenance and upkeep for Ascent and Tower Square. Dedicated in December 2014, Tower Square provides a space to gather, pay vigil and peacefully demonstrate.

Located in the all-faith Wyuka Cemetery at 3600 O St., the Nebraska Holocaust Memorial is considered one of Lincoln’s Top 50 attractions by TripAdvisor.com. Dedicated in 2007, the monument memorializes those who perished in the Holocaust and honors all liberators and survivors of the Nazi concentration camps. The Lincoln Community Foundation is home to the Sam and Frances Fried Holocaust Memorial Maintenance Fund, which helps preserve this important landmark. Individuals are encouraged to support ongoing educational improvements by buying personalized bricks for $100 each that are displayed at the memorial. Visitors can take time to pause and reflect at the monument, which rests in the northeast corner of the cemetery.

If you are searching for an outdoor oasis near downtown, Union Plaza is an urban park between a three-block stretch of 21st and 22nd streets, O to R.  Visitors can go for a leisurely stroll or take advantage of the city’s bike share program, Bike LNK (bikelnk.bcycle.com/), and experience Lincoln’s extensive trails system that leads past this outdoor amphitheater. Catch a summer concert or enjoy the water features and native plants along the way. The amphitheater was made possible by the Lincoln Community Foundation on behalf of the Sheila Dickinson Dinsmore Graf Fund.

Gifts made to—and through—the Lincoln Community Foundation have enhanced many of our city’s outdoor spaces that include memorials, monuments, green parks and urban spaces. Visitors and residents alike are fortunate to have places to enjoy their time here in Lincoln. Learn more at lcf.org.