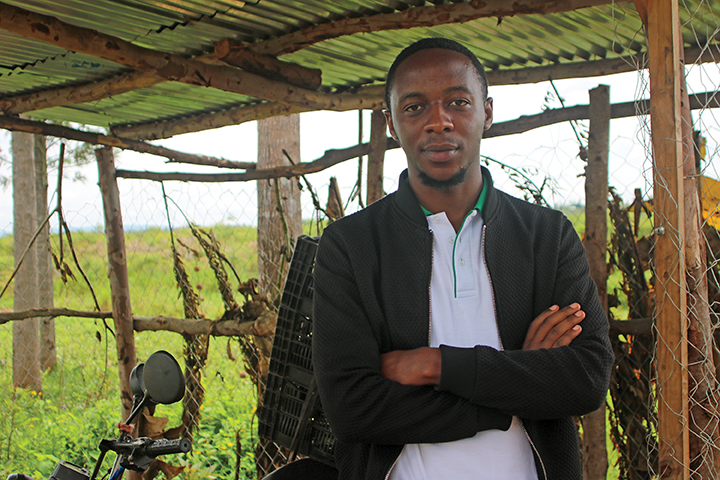 It started with a question twelve years ago on a quail hunting outing in Georgia.

Bay also chaired the board of the Robert B. Daugherty Charitable Foundation, founded by the irrigation trailblazer who’d created Valmont in 1946. Though retired and in his mid-80s, Daugherty worried that future generations wouldn’t have the water needed to ensure food security and he asked Bay to help find a solution.

Milliken didn’t hesitate. The university was doing a great deal, he said. Nebraska was one of the biggest irrigation users in the world, so the state and its land-grant university had long focused on water. With droughts and other pressures mounting, water had become an increasingly important research focus in the past decade.

Just one percent of the Earth’s water is available freshwater and, of that, three-quarters is used by agriculture. By late 2007, when Bay and Milliken were making plans, the United Nations and others had begun to raise the alarm that food production would need to double in the next 35 years to meet the needs of a world population approaching 10 billion people and economic prosperity changing diets. Yet the water required to achieve that goal received much less attention.

As the two men talked that fall afternoon, they noted that many water-focused institutions existed, but they dealt primarily with water quality or access. Perhaps an opportunity existed for an institute focused on water for food. But did the University of Nebraska, a leader in agriculture, have the water expertise to pull off the kind of global impact Daugherty and Bay hoped to achieve?

Fast forward to early 2009. Over coffee at the UNL student union, the late Prem Paul, UNL Vice Chancellor for Research and Economic Development; Bob Meaney, Valmont Senior Vice President; and Monica Norby, UNL Assistant Vice Chancellor for Research, shared ideas around the topic of water and food security to better define their ideas. What are the major water challenges not just in Nebraska, but in developed and developing countries globally? What were others doing? Could the university play a role? What can we do to become a global innovator and leader in agricultural water management?

Paul spoke up. “We need a conference. Let’s bring in the world’s experts and have them help us answer these questions.” That first conference, The Future of Water for Food, would prove a turning point and was the first of a nearly annual Water for Food Global Conference, a signature event drawing hundreds of passionate leaders and researchers from dozens of international countries.

Moreover, the conference reinforced the notion that the university needed to establish a multidisciplinary and global water for food institute. But thinking about an institute was one thing. Launching it was another. That’s where Bob Daugherty came in.

In early 2010, Milliken drove up to Omaha to visit the then 88-year-old Daugherty at his home. After the introductions, Milliken launched into what Bay assumed would be a lengthy proposal.

“You know, these academics can make big presentations, and JB was ready,” Bay recalled with a laugh.

Two or three questions in, however, Daugherty unexpectedly held up his hand. “I’ve heard enough,” he said. “It’s a great idea. Let’s do it.”

Bay walked a stunned Milliken out. “Congratulations!” he said. “You’ve got your gift.”

The $50 million gift was one of the largest NU had ever received. The meeting had lasted less than half an hour.

In spring 2010, the Daugherty Water for Food Global Institute (DWFI) was officially inaugurated at the second Water for Food Global Conference in Lincoln. Nearly 500 people from 24 countries attended the conference, infusing the nascent institute with a kaleidoscope of leaders in agricultural water management. The newly launched institute was quickly ramped into operation with the expertise and vision of key leaders including Jeff Raikes, then CEO of the Bill and Melinda Gates Foundation; Harvey Perlman, UNL Chancellor; Ronnie Green, UNL Vice Chancellor; and Roberto Lenton, DWFI’s Founding Executive Director and former Director General of the International Water Management Institute.

Ten years later, DWFI has grown to encompass 35 staff, 120 faculty and global fellows and a cadre of post-doctoral scholars and students pursuing projects focused on increasing water and agricultural productivity. Additionally, the institute leverages the experience and expertise of the Nebraska Water Center to address critical state-based water issues. By working together, DWFI is carrying out projects that are helping farmers from Ravenna to Rwanda use water more efficiently. Here are snapshots of two recent examples:

As it celebrates its first decade, DWFI is making its mark locally and globally. Robert Daugherty’s foresight helped put the institute at the forefront of one of the world’s greatest challenges.

Want to learn more? Join us at our 10th Global Conference, Oct. 4-6, 2020, at the Cornhusker Marriott in downtown Lincoln!