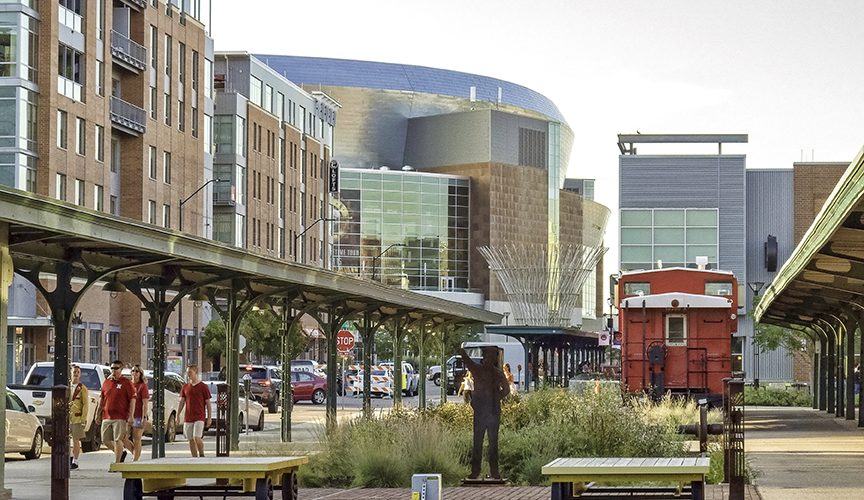 A mere six years ago, downtown Lincoln had some things to offer, but it was not what anyone would call hopping.

Plenty of bars and restaurants and a few retail shops were in business from about 11th Street to Centennial Mall and P Street to N Street—and they still are, with some additions.

And while The Mill was a thriving coffee shop at Eighth and P streets, and the likes of Lazlo’s, Brewsky’s and Buzzard Billy’s were serving good food back then, not much was happening to the west.

Enter Pinnacle Bank Arena and a burst of development that has changed the area so drastically a person who hadn’t been down there in the past, say, 10 years, wouldn’t recognize the place.

Trains no longer rumble through behind the old train station; the tracks got moved to the west to accommodate the growing Haymarket entertainment area.

Canopy Street, to the south of the arena, didn’t even exist. Today, it’s home to more than a dozen businesses, including a full-service grocery store that gives both visitors and downtown dwellers a place to buy groceries without driving out of the area. The market (canopystreetmarket.com) will deliver, or you can call ahead and pick up your groceries.

A recent addition, the (402) Creamery at 311 N. Eighth St., joins the long-standing Ivanna Cone at 701 P St. in offering amazing homemade ice cream in flavors you’ve never even thought of.

And the rest of the West Haymarket is jumping, with plans to push the area further to the south. Check out lincolnhaymarket.org to see what’s on tap.

To the east, the city has added a civic center at 13th and P streets that showcases a 57-foot tall illuminated glass tower by international sculptor Jun Kaneko. With additional streetscaping and public seating the whole downtown has been spruced up. New hotels have gone up, bike lanes have been built and many more residential units are drawing people downtown to live.

On down the street to the east, completion of the Antelope Valley Project has ushered in attractive and dramatic changes to the east edge of downtown, plus, the removal of flood plain issues has spurred major development in the area.

South and east of downtown, the Telegraph District is taking on new life, and the new Mill Coffee Telegraph at 330 S. 21st St. has become a popular meeting place. So far, Telegraph District tenants include Nelnet, Allo, The Mill and a Subway store. Take a look at telegraphdistrict.com.

If you’re anywhere near downtown and you’re hungry, you can choose from American, Asian, Middle Eastern, Cajun, Mediterranean, Italian, Indian, Mexican, pizza and more, as well as fast food or sweet treats.

If you’re visiting from out of town or just from outside the downtown and want to pedal around the area, get hooked up with a ride-share bike at bikelnk.bcycle.com. If that seems like too much work, you might try a more automated tour on a Segway (lincolnsegwaytours.com). Two tours are available and include Segway 101 for novices.

Centennial Mall recently got a beautiful facelift extending from the Capitol north to the University of Nebraska-Lincoln City Campus and offers a lovely place to stroll. Don’t miss the recently installed 11-foot bronze sculpture of Standing Bear between Q and R streets.

The burst of growth has been guided by the city’s Downtown Master Plan, which identifies priorities for physical improvements, catalyst developments and policies to guide the city, the Downtown Lincoln Association, the development community and downtown stakeholders for the next 10-year investment cycle.

Based on national trends, Lincoln is considered an “opportunity city,” one that has a strong connection to education, high quality of life and relatively affordable housing. The goal of the city’s plans for downtown is that it become a center of opportunity that is livable for everybody, the DLA says.

Both public and private agencies will use the 2018 plan to guide decisions and actions that affect the form and function of downtown.