An Abundance of Summer Theatre 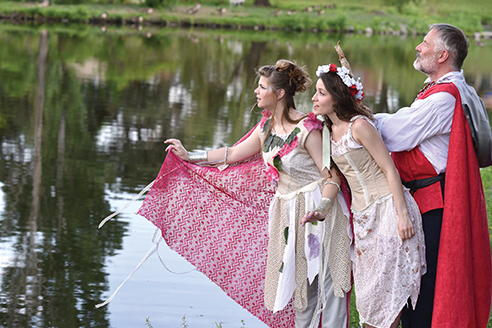 Summer in Lincoln has its share of fantastic performances. In fact, Lincoln is surrounded by theatrical options from the first day of May all the way through to the end of August. Outdoor concerts such as Jazz in June in Sheldon Museum of Art’s Garden and the Lincoln Municipal Band at Antelope Park joins with outdoor theatre at Pinewood Bowl and Flatwater Shakespeare Company’s performances in The Stables at Wyuka and in the city’s parks.

Lincoln’s theatres also cater to those who prefer air-cooled comfort from TADA Theatre in the Haymarket to The Lofte near Manley and from Mahoney State Park to Community Players in Beatrice.

A long-standing Lincoln tradition, Pinewood Bowl’s July musical has been held annually since 1949 in the lush setting of Pioneers Park in southwest Lincoln. From Gilbert and Sullivan to Rodgers and Hammerstein, Pinewood Bowl’s productions provide toe-tapping entertainment for the entire family. Pinewood’s 70th annual summer musical will be a family favorite, Beauty and the Beast. Join Belle as she discovers the humanity in even the most cold-blooded of princes. Bring your picnic basket and a blanket and enjoy this Alan Menken, Howard Ashman and Tim Rice musical under the stars. For more information visit www.pinewoodbowl.org.

Flatwater Shakespeare Company’s new Executive Director, Summer Lukasiewicz, shepherds this eighteen-year-old company featuring some of Lincoln’s finest actors. Flatwater Shakespeare begins its summer season with performances at the open-air Stables at Wyuka Cemetery on O Street and then ‘goes on the road’ taking the show to venues across the city, such as Lincoln Community Garden, James Arthur Vineyards, the Pioneers Park Nature Center and the Railyard’s Canopy street as well as many of the city’s parks. Next year seesTwo Gentlemen of Verona, Shakespeare’s comedy of the conflict between friendship and love, at the Stables June 6-9 and 13-16 and on tour, June 20-23. For more information visit www.flatwatershakespearecompany.org.

If you relish comedies and musical revues, TADA Theatre has a season made just for you. TADA is noted for their Midwest premieres of musicals such as Forbidden Broadwayand Gilligan’s Island the Musical. TADA invites you to two musicals in summer 2019: the coming of ageFun Homewhich was the ticket to get during Broadway’s 2015 season and the popular Pump Boys and Dinettes,based on a true story of two friends who played country music in The Cattleman restaurant in New York City. TADA is located in the Creamery Building at 7th and P in Lincoln’s Haymarket. For more information, contact 402-438-TADA (8232) or go to www.tadaproductions.info.

The Angels Theatre a group of performing artists who collaborate to create engaging theatre to promote artistic growth, foster community relationships and raise social awareness. According to Executive Director Judith K. Hart, “The Angels Theatre Company is offering readings of new plays created by the members of our Play Writing Collective. 2019 will mark the fifth new works festival called First Flight Festival. All plays in the Festival are short plays or monologues under 20 minutes each and written by members of the Collective. Watch for July dates performed in the University of Nebraska’s Studio Theatre in the Temple Building on the downtown campus.” For detailed information about when and where please visit their website—www.angelscompany.org.

The Lincoln Community Playhouse, or LCP, as the locals refer to it, is another long-time tradition on Lincoln’s theatre scene. Located on South 56th Street, LCP presents everything from tried and true musicals to theatre for families. Kicking off Summer 2019 LCP presents the classic Jerry Herman musical Mame. Set in New York City, an eccentric bohemian’s fabulous life is interrupted when her young nephew arrives. Not only does LCP produce blockbuster musicals, they also offer a broad range of outreach activities and classes for all ages. One such activity is the Penguin pairs young artists with developmental disabilities including Down syndrome, cerebral palsy, autism, intellectual disabilities, learning disabilities visual impairment, hearing impairment, and other neurological disorders, with a dedicated group of ‘peer mentors’—children the same age without disabilities—who have volunteered to work side-by-side with them through four months of rehearsals and through the final performance. This June’s project is Penguin Project: The Wizard of Oz Young Performers’ Edition. To get a performance schedule, class and ticket information, call 402-489-7529 or go to www.lincolnplayhouse.com.

The Haymarket  Nebraska Youth very busy in the summer months with workshops and classes that result in public performances. According to the Haymarket staff, “…we work hard on the performance, getting top-notch instructors to teach acting, dancing, singing and all the other skills associated with the theatre, but we also try to maximize the opportunities to learn life skills that can be applied offstage… Every performance by the Nebraska Youth Theatre represents a lot of individual creativity, hard work and bravery from every member of this cast.” For more information about The Haymarket, located on Q Street, please call 402-477-2600 or visit haymarkettheatre.org.

Just a few miles north of Lincoln is another summer tradition, the Mahoney Melodramas. Since 1993, from May to August, families have been treated to a night of booing and throwing popcorn at the villain, and cheering on the heroine, who is always in need of saving. For a complete schedule of their repertoire of productions, visit www.melodrama.net.

Other theatres in the area producing during the summer months include:

Beatrice Community 40 miles south of Lincoln on Highway 77. Join them June 7-9 and 14-16 for the musical farce, Lucky Stiff by the well-known writing team of Lynn Ahrens and Stephen Flaherty about six million dollars in diamonds and mistaken identities. Visit their website for details at www.beatricecommunityplayers.com.

In Hickman, just 10 miles southeast of Lincoln, is a new theatre company The Stage Theater. Their latest productions may be found at www.thestagetheater.com.

About 40 miles east, near Manley Nebraska, is The Lofte Community Theatreat 15841 Manley Road. Summer offerings include an adventure in storytelling, Voice of the Prairieby John Olive in May and June and Gilbert and Sullivan’s Pirates of Penzance, a hilarious farce of sentimental pirates, bumbling policemen, and dim-witted young lovers in July and August. For tickets and more information call 402-234-2553 or visit Lofte.org

For a full list of productions throughout the year, visit the Lincoln Theatre Alliance website at www.lincolntheatrealliance.org.