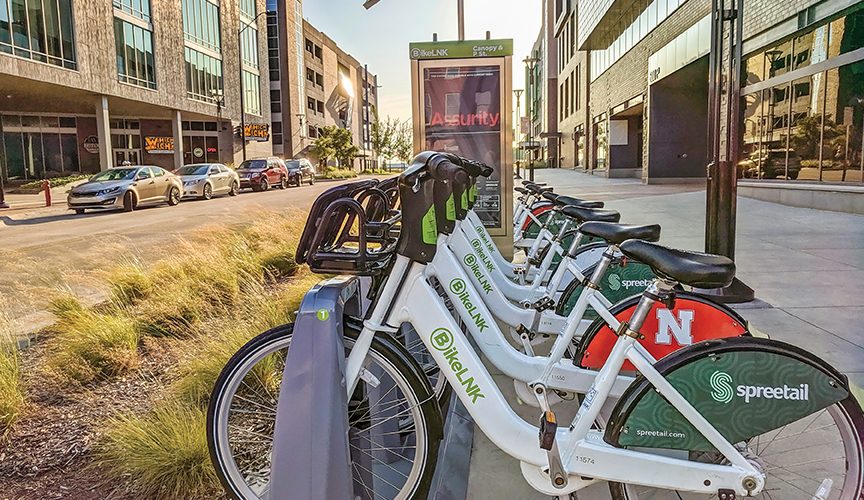 The city of Lincoln, University of Nebraska-Lincoln students and administration and community leaders started talking about bike-share systems and what they could mean for the community in 2014. The city applied for and was awarded a Congestion Mitigation and Air Quality grant in 2016, and using local money raised through sponsorships, created BikeLNK, a program of the city Planning Department and Lincoln’s current bike-sharing system.

Heartland Bike Share, Nebraska’s premier active transportation organization, manages the dock-based bike share program that launched in April 2018 and now has 21 bike-share station kiosks, mainly in downtown Lincoln with a few other key locations at popular destinations served by a fleet of 105 bicycles. BikeLNK users took more than 60,000 trips in just 17 months, and ridership is showing no sign of slowing down.

BikeLNK has a user-friendly pricing structure based around 30-minute or shorter trips. The $3 for 30 minutes single-use Quick Tripper pass can be purchased at any one of the BikeLNK bike-share station kiosks. Passes also are available through BikeLNK.com and on the app, BCycle. A $10 Visiting Voyager pass allows users 72 hours of BikeLNK access to unlimited 30-minute or shorter trips and is meant to appeal to weekend visitors to Lincoln or others who need multiple short trips in a short amount of time. Monthly and Aluminum Access memberships round out the pass types with unlimited access to bike-share bikes for short trips. The Monthly pass is $12 and an annual pass, the Aluminum Access, is $80. Rides longer than 30 minutes cost extra.

In early 2019, the opportunity to create intensive community engagement around a new station allowed the local community to design exactly how the station moving into their neighborhood would look. Many bike-sharing organizations and communities have created art bikes, but in partnership with F Street Community Center and South of Downtown Community Organization, BikeLNK wanted to create an art bike-sharing station. This station is the first of its kind, with a completely community-created design process in partnership with Lincoln Public Schools. Located conveniently in front of the F Street Community Center at 1225 F St., the station is right next to 13th Street bike lanes that allow riders to head toward downtown Lincoln and the core of BikeLNK’s service area.

The South of Downtown Community Organization worked directly with art teachers in neighborhood schools to have students come up with designs for the base plates that make up the foundation of the station. Then, two local artists, experienced and comfortable with airbrushing and spray painting, interpreted these designs and brought the students’ visions to life.

The overall intent was to implement a publicly shared space with grassroots community neighborhood outreach for all ages, embracing art paired with equitable programming in bike sharing and transforming what was once simply another urban street corner into a colorful engaging active transportation hub of community opportunity with bike sharing for all.