Tower on the Plains 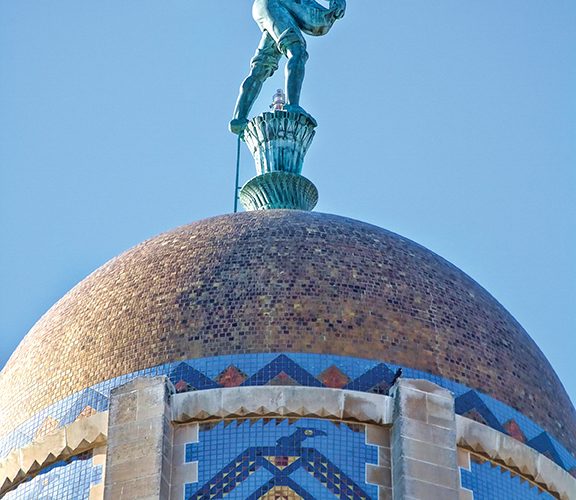 The Nebraska State Capitol houses the executive and judicial offices of Nebraska and is home to the only unicameral legislature in the U.S. Designed by New York architect Bertram Grosvenor Goodhue in 1920, begun in 1922, the building was constructed of Indiana limestone over a decade and was completed in 1932.

Known as the “Tower on the Plains,” and visible from 20 miles away, its 400-foot monolith, Nebraska’s was the first state capitol to incorporate a functional tower into its design. Capped in gold tile above an azure geometric band and supporting the 19.5-foot sculptural finial atop the dome, this bronze figure of a man casting seeds from a cloth satchel, The Sower not only represents agriculture but the “chief purpose in forming society, to sow nobler ideas of living.”

Inscribed around all four sides of the capitol’s base are the names of all 93 Nebraska counties, accompanied by 18 limestone bas reliefs representing scenes of the creation of law. On the west side of the base stands a 9’ bronze of Abraham Lincoln, designed by the creator of the Lincoln Memorial.

Fifteen stories in the capitol and three mezzanines exist within the tower between the 3rd and 4th floor. Memorial Chamber on the 14th floor—the highest publicly accessible level—has four observation decks that offer views of Lincoln from 245 feet. The view from the north observation deck shows Centennial Mall, connecting the capitol to the Nebraska History Museum, the Federal Building and other civic buildings.

The last of Goodhue’s design was completed in 2017 when two drum-shaped fountains were installed in the courtyard. Throughout the years, major restoration work has preserved or recreated the materials and details of the building, and preservation efforts continue.

The allegorical concentration of texts and themes embedded in the Capitol’s design came through creative collaboration between Goodhue and Hartley Burr Alexander, a University of Nebraska philosophy professor. Alexander had studied Native American cultures, wrote extensively on politics and brought these sensibilities to inscriptions throughout Nebraska’s Capitol. Alexander’s themes and symbols were based on human settlement in Nebraska and the development of democracy. In choosing the inscriptions for the interior and exterior of the Capitol, Alexander drew upon statesmen, philosophers, Plains Indian lore and his own insight.

The effort to honor and represent both indigenous peoples and the Europeans who came to live on Nebraska’s plains is evident and intentional. Native American symbols of corn, arrows and bison are featured throughout the Capitol. The Main Portal staircase is flanked by relief panels of bison inscribed with the names of Nebraska’s ten indigenous tribes. European Americans appear in gilded relief, dubbed Spirit ofthe Pioneers, above the inscription that many associate with Nebraska’s unique non-partisan legislature: The Salvation of the State is the Watchfulness of the Citizen. The notion of watchfulness and civil responsibility to work for a more noble life held deep meaning for Burr Alexander. Citizen engagement—the “second house” of the unicameral, the voice of the people—is directly reflected in this statement.

Recent efforts have been made to further honor Nebraskans of note. Along with other state luminaries, the busts of both Willa Cather and Standing Bear, in Memorial Hall, may make their way into the national collection in Washington, replacing J. Sterling Morton (the founder of Arbor Day) and William Jennings Bryan.

Cather and Standing Bear are now named the most notable Nebraskans in the state’s 150-year history. A 1923 Pulitzer Prize winner, Cather was best known for her work chronicling the experience of German, Czech and Irish immigrants who eventually formed the bedrock of Nebraska’s culture and society.

Forging greater respect for Native leaders who shaped Nebraska’s history, a 10′ tall statue of Ponca Chief Standing Bear was dedicated in October 2017 on Centennial Mall between Q and P streets, in recognition of his contribution to the First Peoples’ fight for civil rights.

In 1877, Standing Bear and the Ponca were forcibly displaced from Nebraska to Oklahoma’s Indian Territory to obtain more lands for pioneer settlement. In honor of his dying son’s wish to be buried on ancestral land, Standing Bear defied the government and returned to Nebraska’s Ponca land. His small band was arrested. Supported by attorneys, Standing Bear sued the federal government for writ of habeas corpus. In this landmark trial, the judge ruled that an Indian is a person under the law and is therefore entitled to all its protections. Standing Bear and his band remained on ancestral Ponca land.

Standing Bear’s famous words are expressed in this bronze figure, hand extended as when he spoke in the courtroom: “That hand is not the color of yours. But if you pierce it, I shall feel pain. If you pierce your hand, you also feel pain. The blood that will flow from mine will be the same color as yours. I am a man. The same God made us both.”

In August 2018, a twin to Lincoln’s Standing Bear was dedicated on Ponca land near Niobrara, Nebraska. “We are standing here today because of a promise made by a father to a son,” said Ponca tribal chairman Larry Wright. “This statue honors him but it also honors all those who came back. It honors allof our people who endured injustice after injustice.” The tribe has nearly completed the purchase of 1,800 acres of original tribal land, including Standing Bear’s burial site.

The interior corridor of the building is comprised of three monumental rooms: Vestibule, Great Hall, and Rotunda, throughout which decorative elements appear in sequence. The domed Vestibule introduces the theme ‘gifts of nature’ through mosaics of flora and fauna with the sun as a central motif. The largest in the capitol, four massive 25-foot columns of red Verona marble support the vaulting, topped by bull motifs.

The most spectacular interior features are the Great Hall and Rotunda, its mosaic vaulting adorned with three medallions representing the Life of Man (past, present and future.) The Procession of Life—depicted in enormous circles of black and white mosaic—begins with imagery of the cosmos—lightning, moon, and celestial orbs through mosaic medallions illustrating spirit of soil, vegetation, and animal life.

Eight winged figures in colorful mosaic adorn the dome of the Rotunda, representing “virtues,” among them justice, magnanimity, charity and courage. More floor mosaics illustrate the elements of air, fire, earth and water, surrounding a larger disc representing the life-giving earth. A mosaic band connecting the five circles depicts the fossil life of the Great Plains. The images of prehistoric plants and animals are based on scientific illustrations from the University of Nebraska and are a favorite of many visiting schoolchildren.

The Supreme Court Chamber and all its furnishings are constructed of solid American walnut wood including the 8,000 piece carved walnut ceiling set in numerous squared layered coffers, aiding the acoustic perfection of the Chamber. The Justice’s bench is detailed with geometric inlay using a variety of woods. A frieze in the paneled wall behind the bench is inlaid with the sobering inscription from Heraclitus: EYES AND EARS ARE POOR WITNESSES WHEN THE SOUL IS BARBAROUS. Once each month, the Nebraska Supreme Court’s seven appointed justices hear oral arguments which are open to the public.

The remarkable feat of the Capitol is the interface of materials, themes, and styles throughout the building. The tiniest of details are symbolic, as in the small marble carvings around the Supreme Court chamber door: flower (nature), anvil (industry), corn (agriculture). Colorful carved doors on the Warner Legislative Chamber illustrate the tree of life as a corn plant rising up between an indigenous man and woman. The mosaic dome in the chamber emulates native beadwork, and the vaulting depicts four scenes of native life, using indigenous ledger art as inspiration.

The Nebraska Capitol is a stunning example of Goodhue’s eventual synthesis of simple, archaicforms. He was passionate about the infusion of color, sculpture, and mosaic details, and remained adamant about their integration in his work. This dedication to the integration of art and architecture permeates both interior and exterior features of the building.

For both residents and visitors, the rich aesthetics and thought-provoking themes are worth a meandering visit or long meditation in this breathtaking example of American architecture.

A cafeteria, gift shop and free tours on the hour are available to visitors.