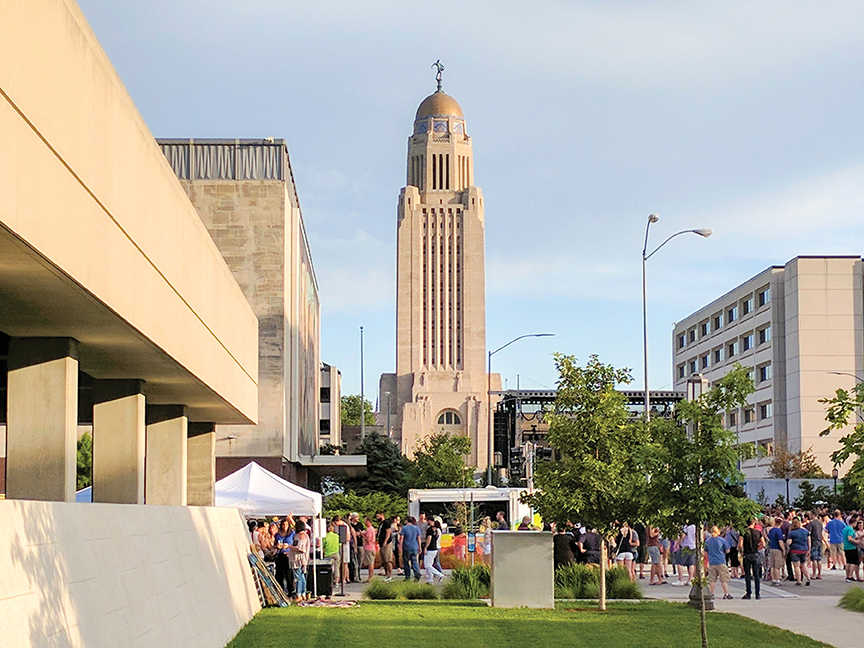 What used to be a lackluster space with dysfunctional water fountains, crumbling stairs and a dimly lit seven-block greenspace has been transformed to a beautiful, educational, high-tech, ecologically friendly and ADA compliant mall.

After many years of planning and construction, Lincoln’s Centennial Mall is finally revitalized to be the educational, beautiful and Nebraska-centric space that its organizers dreamt it to be.

Executive Director of the Lincoln Parks Foundation Christie Dionisopoulos remembers the original dilapidated design as “an embarrassment to Lincoln.” But with years of work, generous donations and some forward thinking, the space is now showing off its new facelift.

The renovation comes after $9.6 million was provided by 130 donors, including a $2 million gift from Glenn Korff. This includes a million and a half dollars for an endowment to satisfy the cost of upkeep.

The design efforts to create such a space began almost a decade ago in the late 2000s. Construction itself kicked off in 2013 and lasted until the Fall in 2016. Now, the last touches are being made.

“It’s been a long time in the making,” said J.J. Yost, planning and construction manager at Lincoln Parks and Recreation.

The mall now has many unique features, all of which tell the story of Nebraska.

“We wanted it beautiful and to reflect Nebraska and the people and history here,” said Dionisopoulos. “We wanted to allow people the opportunity to reflect.”

One such attribute is what the creators call “Nebraska education on location,” which includes roughly 132 plaques laden throughout the Mall that tell the stories of impactful people, places and businesses in Nebraska. The tiles have QR (quick response) codes that link to web pages, photos or videos online, allowing for further research of the plaque’s subject. Some of the plaques have been added by the design team and some have been purchased by Nebraskans who want to tell a story.

Dionisopoulos says her favorite tiles are the ones that tell the stories of Nebraskan ranches that have been owned by the same families for generations and generations.

“Once you start reading those, it’s hard to stop,” she said.

The plaques will continue to be purchased and Dionisopoulos says there’s plenty of space to keep adding to the current 132 plaques.

Yost said each block has its own theme and that, in addition to the Education on Location plaques, the design contributes to the story. He said it was important to their team to not duplicate what the capitol does, but rather, add to and compliment the stories within the state capitol.

“When you’ve got the capitol at one end of the Mall, what you don’t want to do is try and compete with that and (instead) compliment it,” said Yost. “We’re trying to brighten the front door of the capitol.”

The design of the mall does just that; it’s simple, straightforward and pays attention to detail and history.

The mall has also been revamped to be easy to use for visitors in wheelchairs and is designed to be compliant with ADA (Americans with Disabilities Act) standards.

“We did have ADA before, but you had to criss cross back and forth and it wasn’t very accessible,” said Dionisopoulos. “Now, it’s a natural flow of pedestrian traffic and a very comfortable walk.”

The only spots on the mall with stairs are in the centers of the closed blocks.

Yost and Dionisopoulos both said utilizing native Nebraska plants on the mall was an important element in the planning process. These plants are both drought-tolerant and also fit with the overarching goal of creating a learning space about Nebraska.

The use of Nebraska-based plants also played a role in keeping the mall ecologically-friendly and sustainable.

“The mall uses bioswales for storm water management instead of having all the storm water runoff from the mall go straight to sidewalks or surrounding streets,” Yost said.

Bioswales are essentially open drainage ways on the sides of the Mall grounds. This gives the rainfall a chance to absorb into the Mall’s plantlife.

“We’re trying to capture and infiltrate as much of that first flush of rainfall as we can,” said Yost.

Additionally, the mall utilizes LED lighting for the areal lighting fixtures, a more environmentally friendly option of lighting, and wind meters are utilized on the fountains so that, if the wind increases, the fountains are either throttled back or shut off to keep from wasting water that might otherwise be blown out of the fountain area.

This intentional approach to detail is important not only for the more scientific elements of constructing such a space, but also for the storytelling approach.

For example, many of the patterns on the mall mimic the beadwork and designs of Nebraska’s first people: the Native American tribes from the state. That decision was far from accidental.

“We know that if we’re going to try and tell the story of Nebraska, we needed to go back to the first people,” said Yost.

Many features in the intricate layout are nods to Nebraska’s first people: Native American tribes. On the L to M street block there’s a Nebraska Map, within that map bear paw prints represent the campsites logged along the trail of tears and the dates that Chief Standing Bear was in Nebraska are noted in medallions on that map.

Between P and Q street lies a circle of lights, each signifying the original tribes of the state.

“We felt like this was a real opportunity to tell this story and maybe this is a story that’s not as well told in the capitol and we really reached out to several people to help us with that effort,” said Yost.

Yost says the design team let the Nebraska Commision on Indian Affairs tell them the best way to tell the story of Nebraska’s native people.

Perhaps most significant will be the soon-to-be erected 10-foot statue of Chief Standing Bear that will tower over the last block in front of Anderson Hall and the Children’s Museum on Q street. Dionisopoulos said the team has been trying to figure out what the artwork on that block would be for a while and putting a statue of Chief Standing Bear in that prominent space “just fit together.”

“The Indian Commision wanted Chief Standing Bear in a really prominent space,” said Dionisopoulos. “It can be a gathering place (…) and having him there will bring attention to him and what he stood for and what he did for his people. We absolutely want to bring light to that.”

Dionisopoulos says gathering at spaces like soon-to-be Chief Standing Bear monument and spending time outdoors is important for our health and has proven to be important to Lincolnites based off charitable giving to the Parks Foundation.

“I feel like as humans we’re happiest and healthiest in our natural environment,” she said. “It’s important for us to connect with nature, I really believe that, and here in Lincoln we have a culture that really value our green spaces and parks.”

The new Centennial Mall is the perfect way to spend time outdoors, enjoying Lincoln’s parks system, while also tying together two important tourist destinations in Lincoln: the capitol and the University.

“The two anchors of the Mall are our State Capitol building and at the other end, our land grant University,” he said. “If you’re visiting Lincoln and you want to get a true experience of why Lincoln is here, the mall is the perfect way to really pull those elements together.”