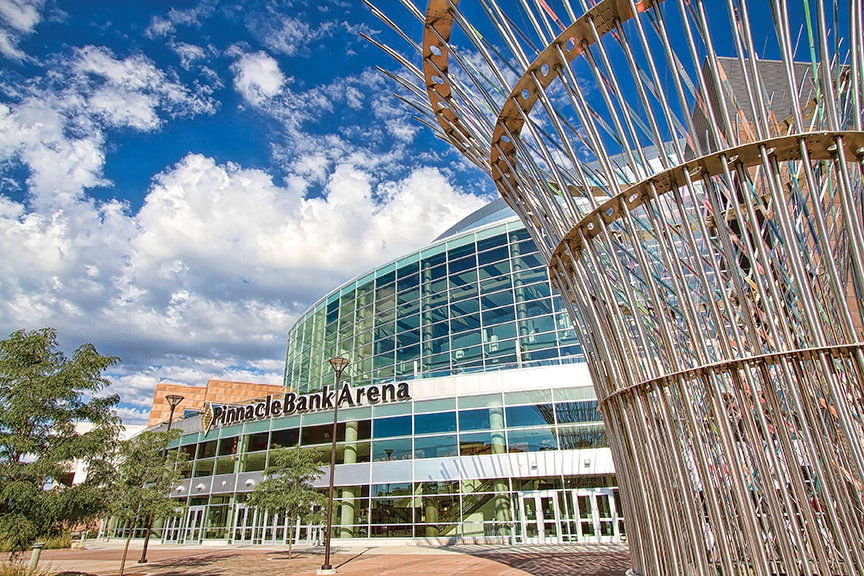 Less than five years ago, railroad tracks ran through the area that has now become a center of Lincoln’s nightlife. When the people of Lincoln voted to approve the public-private partnership that built the Pinnacle Bank Arena, they also approved a plan to move the tracks farther west. The result is The Railyard, Nebraska’s first entertainment district, located in the newly expanded Haymarket district. The Railyard anchors the west end of a vibrant downtown that extends east to Antelope Valley and Union Plaza and offers Lincoln residents and visitors alike plenty to eat, drink, see and do.

Today, restaurants, specialty shops and music venues of the multi-story Railyard surround a courtyard bounded on the west by one of the original wrought iron canopies that sheltered rail passengers from the elements. In all seasons, the Railyard sponsors events that close Canopy Street on the north and south ends of the block, expanding access for events like pre-show parties for arena concerts, First Friday performances, special soccer tournaments, Lincoln’s annual Zombie Walk, the Skate Art Music Festival, a pole-vaulting “street meet” and extra space on concerts and movie nights.

Tessa Warner, sales and business manager for Railyard Entertainment, said the district’s goal is to offer a variety of events so that everyone in Lincoln will have reason to come to the Railyard and surrounding Haymarket at least once a year. Located just south of the Pinnacle Bank Arena, the area is a private development dedicated to connecting people to their community, Warner said.

The Cube, a megascreen that showcases classic movies and previews of new releases also broadcasts special events like Husker games and the World Cup soccer finals and the Triple Crown races. On regular evenings, the screen features art exhibits. “That helps to make the Railyard a cultural center, too,” Warner said.

From December through February, the courtyard becomes an ice rink, open from late afternoon until 10 p.m. on weekdays and most of the day on the weekends.  The rink is available for parties and private events, but is largely a gathering place for families and children.

“Outdoor ice skating is a unique
experience,” Warner said. And when you add events like holiday movie nights and Storytime with Mrs. Claus, “it’s kind of magical.”

The Haymarket district has been home to both long-established firms and startups that reflect Lincoln’s newly earned moniker of the Silicon Prairie. Architecture firms, digital marketing and design companies are housed alongside older law firms and development offices. South down Canopy Street from the Railyard is clear evidence of Lincoln’s vibrant economy. Hudl, the sports video analysis software company, is in the process of constructing its headquarters. The company, which has grown from a three-person start-up in less than a decade ago, plans to move what will likely be more than 500 employees to the new building by 2017. Hudl’s new building will take its place next to the headquarters of Olsson Associates, an engineering firm that moved into a new three-story building on Canopy Street in 2014.

Tower Square at 13th and P gets its name from the five-story glass monolith glass sculpture by renowned ceramic artist Jun Kaneko. The square hosts music, dance and other events. Centrally located, this plaza is within a few blocks of UNL campus, theatres, museums and music venues. At night, the tower becomes a colorful beacon lit from within.

All of Lincoln can use the walkways, enjoy the water plaza, sculptures and play areas at Union Plaza, a $4.75 million urban park, built in the Antelope Valley project with substantial support from Union Bank. The park includes an amphitheater. Free community family events are among the festivities scheduled at Union Plaza during the summer months.

At the other end of Lincoln’s growing downtown, Antelope Valley, private companies continue redesigning the area at 21st and N streets to embrace both commercial and residential use. Employees and residents there have easy access to the Billy Wolff Trail and the new N Street bikeway.

Following the bike trail that parallels Antelope Creek, cyclists can travel quickly and safely into downtown from the south and east all the way to the Haymarket, Railyard and Pinnacle Bank arena, following the new N Street bikeway’s protected lane for cyclists.

Todd Ogden, deputy director of the Downtown Lincoln Association, said Lincoln’s already strong bike culture continues to grow. Lots of young, talented people are moving to town, he said, and they expect to be able to use their bikes to get around.

A rental “bike share” program is also available, Ogden said. The city, the University of Nebraska-Lincoln and the DLA worked together to obtain a federal grant and raise a private match to fund a program offering 100 bikes for rent at 15 individual bike stations throughout downtown and the UNL campus.

The N Street bike path crosses a newly renovated Centennial Mall, the seven blocks that connect the State Capitol on the south with the UNL campus and the Nebraska Historical Society headquarters on the north.

Built in 1967 in honor of Nebraska’s centennial, the mall has been refurbished as accessible and sustainable, with drought-resistant plantings and efficient water features. Plaques telling the story of Nebraska’s history with special emphasis on the contributions of the 24 indigenous tribes that once lived here appear at intervals throughout the mall.

The variety of new additions to downtown reflects the diversity of Lincoln’s culture and economy, as well as its commitment to offering public space that provides for all people; families, employees, students and visitors.  Everyone can find something to enjoy in the center of Lincoln.

– two rubber-tire trolleys to transport people from the Haymarket to the P Street corridor and elsewhere in downtown;