The Buildings of F. C. Fiske: An Architectural Tour of Lincoln 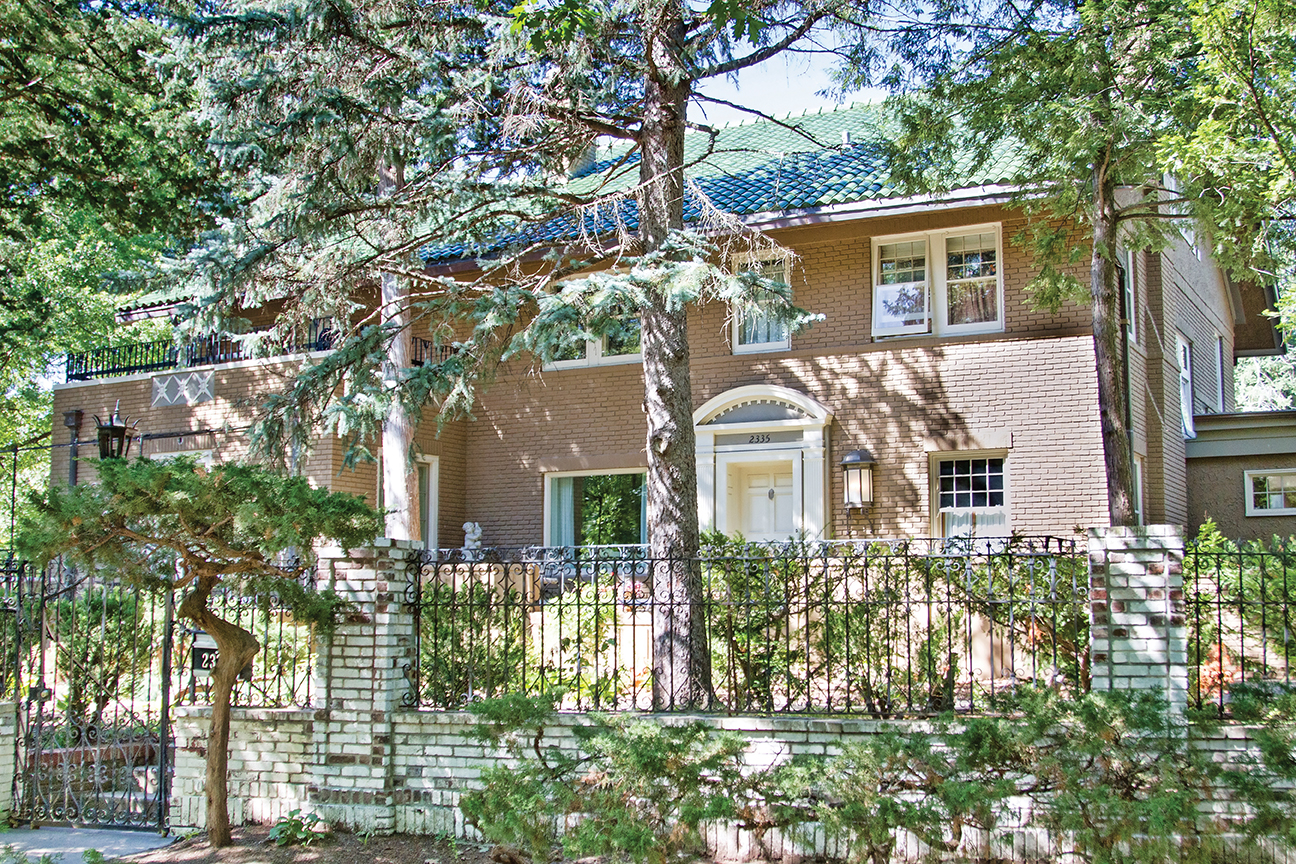 The population of Lincoln, Nebraska’s capital city, quadrupled in the 1880s, rising from 13,000 to 55,000. The boomtown drew ambitious young men eager to establish themselves like William Jennings Bryan and John J. Pershing.

Less known, but perhaps of greater impact on the built environment of his adopted city was New York-born, Cornell University-trained architect Ferdinand C. Fiske (1856-1930). He arrived in Lincoln with his new bride Katherine in 1887 and almost immediately was commissioned to design churches and business blocks, rowhouses and mansions. Except for a few years in the economically depressed 1890s when he traveled in search of work, Fiske practiced architecture in Lincoln with a variety of partners until his death in 1930. Many of his works still stand for you to enjoy on this architectural tour.

We’ll begin in Lincoln’s historic Haymarket District, where Fiske designed a half dozen of the major warehouses. He touched all four corners of the 8th and P intersection, designing a four-story warehouse at the southeast corner in 1905 for Lincoln Drug Company. (He added the fifth story in 1919.) Also in 1905 he designed 733-737 P Street for Grainger Brothers, wholesale grocers, then designed the complementary warehouse at 105 N. 8th St. for the same company in 1912. That same year he designed the Stacy Bros. Fruit Co. building at 800 P. His other major Haymarket buildings are Carter Transfer Warehouse at 311 N. 8th St. of 1916, Lincoln Fixture & Supply Co. Building at 824 P Street of 1922, and Ridnour Building at 809 P Street of 1925—Fiske’s last Haymarket project. All are substantial, handsome, and wonderfully adaptable buildings, now providing apartments, offices, shops, restaurants, and coffee houses.

Next, go east on O Street, nodding south towards the Capitol as you cross Centennial Mall (formerly 15th Street). Fiske’s Brace Building formerly stood on the southeast corner of that intersection (site of the parking garage of Denney Federal Building). The five-story office building occupied a site just 25 feet wide and 142 feet long.

At 25th and O Streets, turn right one block to N Street, where Elliott Elementary School has stood at the southwest corner of the intersection since 1921, of red brick and rich cream-colored terra cotta. The main entrance on South 25th Street has two terra cotta owls flanking the main doorway. The secondary entrance on the west is even grander, with a gleaming three-story terra cotta tower facing the playground, downtown, and the Capitol. Fiske carried out projects for Lincoln Public Schools (LPS) from the 1890s to1920s. Five of his schools are still in daily use.

At Vine Street, turn right (east) to view Whittier Junior High School at 2200 Vine Street on your left. Now Whittier Research Center of UNL, the Neo-classical building was Lincoln’s first purpose-built junior high school in 1923. Continue east on Vine to N. 27th Street, then turn north to Holdrege Street, turning east to pass by Clinton Elementary School at 29th and Holdrege. It was designed in 1925 by Fiske, Meginnis, & Schaumberg in the

Elizabethan Revival style with Fiske’s typical emphatic entry pavilion. Clinton was the last school project for 69-year-old Fiske, though his younger partners continued to design for LPS for many years.

Further east on Holdrege Street is the Edgar Burnett House at 3256 Holdrege. Burnett was director of the University’s “Experimental Station” when he had Fiske & Dieman design his American Foursquare style house in 1904. Burnett became the University’s Chancellor from 1928-19 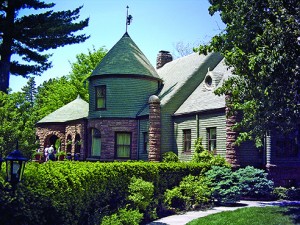 38 while residing in the house, and the “Experimental Station” became UNL’s East Campus. Fiske also designed Agricultural Hall in 1904, which stands as the southwest gateway to the main quadrangle on East Campus. Agricultural Hall’s buff brick became the predominant material of East Campus, unlike the mostly red brick of City Campus downtown.

After a quick stop for ice cream at East Campus’s Dairy Store, proceed south on N. 33rd Street. At Vine, Hartley Elementary School (1920) on the southeast corner was the first school designed by the Fiske & Meginnis partnership.

Continue south on 33rd across O Street and enjoy the views west to the Capitol tower across Woods Park. At the northeast corner of 33rd and Randolph Streets (one block south of Woods Park), Fiske designed the large, dark-brick home of auto dealer N. Z. Snell in 1915—now a home and potter’s studio.

Continue south on 33rd to A Street, and turn west across Normal Boulevard and Antelope Creek. On the south side of the street, opposite the Lincoln Children’s Zoo, the massive A Street Water & Power Station (now called WaterPark) was built in 1924 from Fiske & Meginnis designs. It now provides 39 condominiums, with porches behind the large industrial windows.

At 27th Street, turn south, accross South Street to Sheridan Boulevard. The Boulevard’s Historic District includes sixteen Fiske-designed homes, which we’ll just sample. Turn right on Sheridan and watch for 2335 Sheridan on the left. It occupies an entire block face between Park Avenue and Sewell Street. Fiske designed the home in 1915 for George and Hazel Abel, whose construction-related businesses still thrive in Lincoln. At 2221 Sheridan, the redstone, Mission-style Spalding House was the first residence constructed on Sheridan Boulevard in 1908-1909. Frank Spalding was a lumber dealer and the interior displays his profession in rich woodwork.

When Sheridan ends at South Street, turn west to South 20th Street. Turn north at the beautiful South Street Temple (not a Fiske design, but rather the work of his 1920s competitors, Davis & Wilson). At 2024 South 20th Street is Prescott Elementary School, an Elizabethan Revival gem of 1920-1922 by Fiske & Meginnis. The school accommodated 1,000 students soon after it opened.

Back on 20th Street go north again, across  A Street and west on B Street. In the first block, Fiske designed four houses of four different styles  within a three year period—1965 and 1953 B Street in 1916, the first displaying the Renaissance Revival style and the second Tudor Revival. Across the street on the north side, Fiske designed 1944 B Street for former U. S. Senator Elmer Burkett in 1914, and 1930 B Street for merchant Grant Watkins in 1915. Watkins’ house has elements of the innovative Prairie School, while for the Senator’s home Fiske followed no single style, but rather combined elements freely and confidently.

On 19th Street, go south back to A Street, and there turn west. 1601 A Street is another Fiske design of 1915, built for Linus Southwick in a free interpretation of a bungalow, but without a bungalow’s porch. Continue on A Street to South 11th, and turn north into the Everett neighborhood, with its diverse collection of periods, scales, and styles of architecture. At the corner of 11th and H Streets, two of Fiske’s earliest surviving buildings complete our tour. Near the southeast corner, at 1111-1119 H Street, Lyman Terrace of 1890 originally provided five rowhouses, before being converted to numerous apartments. On the northwest corner, Barr Terrace of 1890 at 627 South 11th Street underwent the same transformation from rowhouses to apartments. Both reflect the rapid growth of Lincoln in that period, and Ferdinand C. Fiske’s perception that Lincoln, Nebraska was a place where an architect could make his mark. He certainly did.