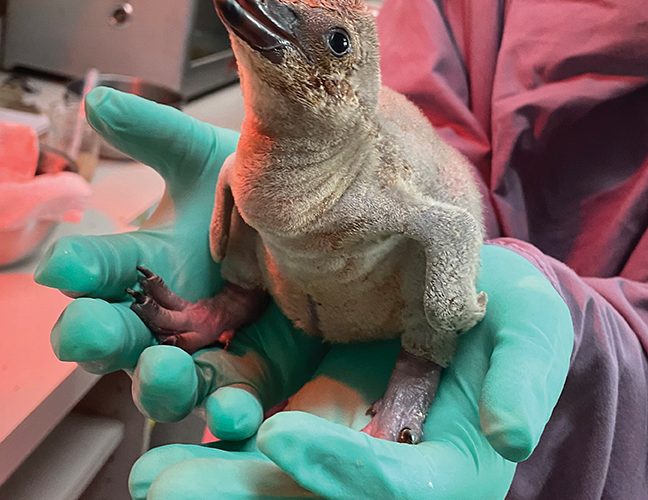 On May 11, 2021, the Zoo welcomed its first-ever Humboldt penguin chick into the world! Born to parents Bella and Arnie, Pebbles has shown from the beginning that she is a fighter. Unfortunately, before Pebbles hatched, her mother Bella experienced heath complications, and although our highly trained veterinary and zookeeper staff tried everything within their power, they were unable to save her. It was at that point, the decision was made that a team of zookeepers would take over her care, and work to protect and raise Pebbles. Since Pebbles hatched, the Lincoln Children’s Zoo team has carefully monitored her weight, growth, and diet to ensure she remained healthy and met all her growth milestones. With five feedings per day in a 12-hour period, Pebbles quickly grew and met every milestone to be a healthy penguin chick. As Pebbles has developed, she has transitioned from a liquid fish formula to solid foods. Additionally, she has officially moved from our Animal Care Center to the behind-the-scenes area of the penguin habitat and has started introductions with the rest of the penguin colony. As she continues to grow, Pebbles progressed from the fluffy down feathers of chicks to the specialized protective feathers of adult penguins. Once she gained all her adult feathers our zookeepers taught her to swim through a series of introductions to water and fully integrated her into the penguin colony.

Zookeepers have put in long hours and displayed much dedication to raise this little chick and to honor her mother’s memory. Avian keeper JoHanna Laphiner says it was worth every moment. “Raising Pebbles has been one of the most challenging and most rewarding things I have ever done,” she says of the time. “It is nothing short of magical to be able to watch this penguin grow up and meet milestones.” While the Zookeepers were hard at work behind-the-scenes, the community was getting to know Pebbles in a different way. Weekly updates on social media introduced Pebbles to the community and gave viewers a glimpse of what it takes to care for a baby penguin. These weekly updates also gave Pebbles her name. During the first three updates, the Zoo asked the community for name suggestions. After over 500 submissions, the names were narrowed down to five contenders. From that short list the community voted and selected the winning name, Pebbles.

Pebbles has now joined the rest of the penguin colony full time and can be seen at the Penguin Pool during your next Zoo visit!