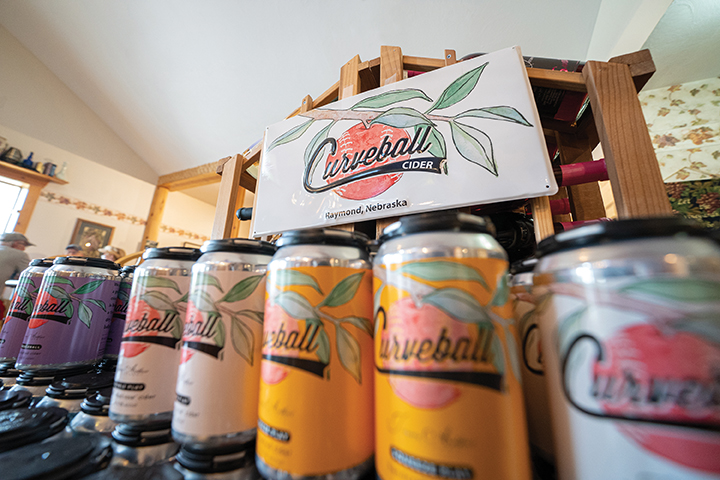 James Arthur Vineyards has produced numerous award-winning wines over the years, but 2021 marked the first time JAV entered and won an award for one of its Curveball Ciders.

Double Play, a hard apple rosé cider featuring Concord grapes that turn it a lovely pink, won a Gold Medal in the Modern Cider category at the 2021 New York International Cider Competition. The third annual event drew more than 300 submissions from around the world. National cider giant Angry Orchard beat out JAV for the double gold with its Nouveau cider.

“We feel that these judges, whose livelihood relies upon their skill set, truly know what the consumer wants, as they receive on a daily basis the feedback from the consumer of what is good and what will sell,” the competition says on its website.

Cider is an example of how JAV and other local wineries offer more than just wine to entice and engage customers. JAV also makes its own Sangria, enhanced with fresh fruit during the summer. In July, JAV became the first local winery to offer a refreshing, carbonated seltzer—made with Edelweiss grapes—in a can.

Let’s not forget that many of the local wineries present live music and entertainment series, host weddings and special events and serve themed dinners.

They’ve become destinations for much, much more than just wine.

Leading the way is JAV, now the state’s oldest operating winery. It started in 1992 when Ballard, who co-owns JAV with his wife, Barb, suggested to his father-in-law, James Arthur Jeffers, that they grow grapes as a hobby. Soon the family planted the first 100 wines with tender loving care. As the number of vines grew, so did the idea of turning the family hobby into an actual business, and after careful consideration and research, James Arthur Vineyards was born.

JAV opened its doors in 1997 at its home near Raymond. A pioneer in the Nebraska wine industry, James Arthur Vineyards is still the largest wine producer in the state. Less than 10 minutes from downtown Lincoln, the winery has hosted hundreds of thousands of guests over their 23-year existence, including visitors from every state as well as international visitors.

Surrounded by nearly 20 acres of vineyards, the winery also brings in grapes from nearly a dozen other growers across the state, making their final product truly unique to Nebraska. In the mid-2010s, Ballard introduced Curveball, a hard apple cider series. The winery began canning its Grand Slam and Double Play ciders in 2019, making it available at retail stores in the Lincoln area.

Today, the vineyard has literally grown into the thousands of vines that flourish near the 8,000-square-foot tasting room and production facility—surrounded by a panorama of gazebos, waterfalls and beautiful landscaping. New is a four-season porch, completed in February 2019, offering a spectacular view of the vineyards, and a large storage shed/farm headquarters sitting just east of the winery.

JAV has become known for its “World Famous Murder Mysteries,” never-a-cover-charge summer and fall music series, haunted hayrack rides, cabaret and comedy shows. It extended the winery experience into Lincoln with its purchase in 2014 of the From Nebraska Gift Shop at Eighth and Q streets, where the Ballards added a tasting room to the shop which features the best of Nebraska-made products. In 2020, From Nebraska Gift Shop completed an expansion and renovation, adding a cider house and mercantile, including a year-round Christmas store.

While being the oldest and most established in the area, JAV certainly isn’t the only award-winning, family-owned and event-driven winery.

After retiring from the Navy and returning to Lincoln, Jim and his wife Barbara built a house on the family homestead. Jim aspired to be a “gentleman farmer” and ended up planting some wine grapes, which eventually led to a tasting room opened in 2007. Guests can enjoy Deer Spring’s finest in the quaint farmhouse, renovated to reflect the charm of the original structure which sits on the land that was deeded to ancestor 1874 by Ulysses S. Grant. The winery is surrounded by pine trees, giving it the peaceful atmosphere of days gone by, while still providing the contemporary comforts.

Partington’s daughter Jennifer Reeder is the winemaker, and has created a plethora of wonderful tasting, award-winning wines that are distinctively Nebraska. The winery features live music on weekends with a quaint, bucolic backdrop and is home to Wine & Howl, an annual event benefiting the Lincoln Animal Ambassadors.

When Mike Murman planted his first acre of grapes in the spring of 2003 southeast of Lincoln, near the township of Palmyra, he was looking for a hobby that would provide fruit for amateur winemaking. Murman, the owner of Glacial Till Vineyard & Winery, always had an interest in winemaking and had been making small batches of wine in his basement for the last 30 years. With an interest to improve the quality of wine he could make, he turned to growing his own fruit.

In subsequent years, Mike’s belief in quality grapes, coupled with his skill in winemaking, has resulted in several silver, gold and best-of-show amateur winemaking awards. The evolution of the vineyard and winery has been a direct reflection of the hard work of Mike’s three sons; John, Tim and Craig have put in over the years.

With a surplus of wine, the Murmans decided to share their love for crafting quality wines with others. In 2007, they constructed a building for Glacial Till Vineyard & Winery operations. In 2008, GTV became a bonded winery and was open to the public in the summer of 2009. It has an event center on site for weddings, holiday events and corporate meetings.

The winery has become known for its “Fermented Fridays,” a music series featuring food trucks and Nebraska craft brewers. New are self-guided walking tours accompanied by four YouTube videos about the history of GTV, winemaking and more.

Glacial Till also operates a tasting room on Silver Street in downtown Ashland. A mix of new and old, the tasting room offers a rustic feel with the original brick exposed and the original wood floors refinished. It’s filled with modern sleek black furniture and a custom-made bar that was constructed with materials from the winery. It, too, is home to a variety of music events.

GTV has become the state’s leading producer of hard cider, with its primary flavors of Original, Hibiscus Ginger and Passion Pineapple available at the winery, tasting room and retail stores throughout the state.

Also in the Ashland area is Cellar 426. It opened May 2012 on a 20-acre site at 1402 Dennis Dean Road, which is half a mile from Nebraska 66. The winery is owned by Richard and Amy Hilske, who planted their first grapes on the site in 2006 and broke ground on the winery building in November 2010.

The Hilskes combined their love of wine and the outdoors to begin their venture. Shortly after they met they began travelling across the country to vineyards and producing small batches of wine at home. It was during these trips their dream to open a winery began. Cellar 426 is home to live music and has become known for its “to die for” sangria, a sweet nectar resulting from a secret family recipe passed down by Amy’s grandmother. It’s made with the winery’s Linoma Lighthouse wine and is a delicious blend of fresh fruit and other key ingredients.

Just south of Lincoln near Roca is Capitol View Winery, a 14-acre property with a tasting room uniquely shaped like an old Nebraska barn. Capitol View is the newest winery to the Lincoln area, but its roots go a bit deeper. Established in 2017, the vineyard was planted in 2004 and the original owners opened a winery in 2009 as WunderRosa Winery.

Owners Les and Trish Meyer bring a unique look and feel to Capitol View Winery and Vineyards. A former professional boxer and a Colorado farm girl, both became Nebraska lobbyists. Their professional backgrounds give personal meaning to the capitol building on their label, and combined with the vineyard’s beautiful vistas of the Lincoln skyline, Capitol View is an ideal name for the winery.

All the grapes used for Capitol View wines come from grapes grown within minutes of the winery, including 2½ acres of estate-grown fruit. Like the other area wineries, CVW boasts a popular weekend music series featuring local and regional artists.

Located at 575 Fallbrook Boulevard, the SchillingBridge Cork & Tap House offers a variety of hand-crafted wines and wine cocktails as well as their craft beers. Unlike the other wineries, SchillingBridge features a full-service kitchen, offering several tasty gastropub options. The patio offers a mesmerizing fire table, stone fire pits and a brick pizza oven. It’s there that the tap house offers its Thursday Night Music Series.

You don’t have to travel far to find unique and appealing wines when visiting the capital city. Once there, you’ll often discover more than just wine.