The Show Must Go On! 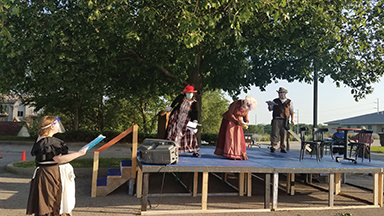 As the Queen song states “The Show Must Go On!” even if life deals the Lincoln theatre community what seems like insurmountable challenges. In the middle of March 2020, Lincoln’s theatre calendars abruptly stopped. Productions were postponed and then postponed again if not cancelled outright.

Typically this section of the publication talks about the active summer theatre season in Lincoln, but all of the plans reported in the Lincoln Today 2020 issue were gone in the blink of an eye. So what about the plans for 2021? Good question. Lincoln’s theatres have alternate seasons planned depending on what happens with the coronavirus (COVID-19) pandemic. The best resource for current theatre offerings is two websites managed by the Lincoln Theatre Alliance, an alliance of theatre creators and arts advocacy organizations who work to promote theatre in Lincoln and the surrounding area. On the home page at lincolntheatrealliance.org is a calendar of productions updated continuously by member theatres. For preview articles and reviews the Alliance maintains a blog. Appearing Locally may be found at appearinglocally.com.

When theatre-makers are faced with challenges, they become all the more creative. Theatre practitioners sit still only long enough to come up with solutions to problems and then on with the show. The first task was to develop the protocols that would make it as safe as possible for those on stage, back stage and in the audience to come back to the theatre. Then productions were selected to substitute for those that required too much interaction such as extensive singing, dance numbers and the need for large casts and crews.

The first production to get on with the show was the Angels Theatre Company’s First Flight Festival at the Lied Center’s Johnny Carson Theater in July. Small casts with masking and extensive safety protocols allowed the annual Festival to showcase the work of local playwrights. The First Flight Festival, conceived in 2015 through the Angels Playwriting Collective, consists of short plays written, directed, performed and produced all by Lincoln community members. The Collective exists to foster local playwrights in their development of new work. It brings interested writers together for peer support to exchange meaningful feedback on works in progress. For the July 2021 list of plays, go to angelscompany.org and click on the First Flight Festival tab.

TADA Theatre located in the Creamery Building in Lincoln’s Haymarket District had the unique challenge of determining how to socially distance audiences in a 55-seat house. Solution? It was summer so why not set up a stage outside? In collaboration with coffee shop The Mill at Telegraph, TADA produced “TADAstock” a musical revue featuring TADA’s company of actors and Live From Lincoln’s Center starring nationally touring actor Sam Hartley. TADA is known for producing lively comedies and musical revues along with stand-up comedy. On the current schedule is Nunsense, The World Goes Round and Pump Boys & Dinettes. For an updated schedule, stop by the theatre at 701 P Street, phone 402-438-TADA (8232) or go to tadaproductions.info.

Beatrice Community Players (BCP), located in Beatrice NE, didn’t move outside, but did stage one-to- three-person plays keeping the actors socially distanced from one another on the stage.  They reduced their audience capacity and added a smattering of cardboard cutouts in seats audience members were not to use. They also included a mask requirement, temperature checks and the use of hand sanitizer at the door. Two productions originally scheduled for the 2020 season have now been moved, at least tentatively, to the 2021 season. The classic musicals Mamma Mia! and The Music Man are on the calendar if the pandemic cooperates. BCP has kept going throughout the pandemic, producing children and family content as well as the regular season through on-line streaming when it was not yet safe to be in the theatres. To see what is playing at BCP, take a trip to 412 Ella Street in Beatrice, phone 402-228-1801 or visit beatricecommunityplayers.com.

The Lincoln Community Playhouse (LCP) opted for taking the show outside with an innovative Parking Lot Plays series. The plays were performed in the LCP parking lot, with audience members listening in their cars on radios. The performances consisted of musical selections, a radio show, a melodrama, and a partnership with Pinewood Performing Arts for two musical concerts. The idea was so interesting LCP was featured on the ABC Television news program GMA3. The fall season began with a one-woman show Erma Bombeck: At Wit’s End and a production of Almost, Maine which is a series of short scenes each with two people in them. LCP is scheduling only two shows at a time in light of the ever-changing pandemic numbers. Go to the Playhouse at 2500 S. 56th Street, phone 402-489-7529, or visit lincolnplayhouse.com/schedule for updates.

Pinewood Performing Arts has been Magic Under the Stars Since 1949. They are best known for their summer outdoor musical. Unfortunately, the 2020 production was cancelled due to the pandemic, so they are particularly excited to announce that summer 2021 will feature the musical The Addams Family, a comical look at the wackiness of every family with familiar characters Wednesday, Morticia, Gomez, and Uncle Fester. Tickets are available beginning in June on line, at all Lincoln area Russ’s Market Stores Customer Service Desks, and at the gate. Pinewood Bowl in Lincoln’s Pioneers Park is the home of Pinewood Performing Arts. The Bowl is located at 3201 S. Coddington Avenue. More information may be found by calling 402-413-1565 or at pinewoodbowl.org.

Outdoor summer theatre is not complete without Flatwater Shakespeare Company. This 20-year old company was also unable to produce its run of performances across the Lincoln city parks and at WYUKA Cemetery’s Swan Theatre at 3600 O Street in 2020. Off-season 20th anniversary celebrations took to online performances with a yet-to-be announced Shakespeare classic to come in summer 2021. For more information about the company and the 2021 summer season, contact them at 402-319-2895 or go to flatwatershakespearecompany.org.

The Lofte Community Theatre at 15841 Manley Road outside Manley NE was forced to cancel three of their productions from spring to early fall. In place of them, the Born-In-A-Barn Players thought outside the box by setting up an outdoor stage and socially distancing cars in the parking lot. Some of the offerings were live and others were screenings of popular motion pictures. The 2021 season is being planned but as of this writing has yet to be announced. Call the theatre to get the schedule at 402-234-2553 or go to lofte.org.

Also just outside of the city limits in Hickman, NE is The Stage Theater. Three of their productions were also cancelled before coming back in December 2020 with a live radio play production of It’s A Wonderful Life. The 2021 season has yet to be determined but The Stage’s noted productions focus on musicals. It is located at 225 Locust Street. Phone 402-512-1808 or go to thestagetheater.com for season information. The big news announced by this company, however, is the creation of The Nebraska Communities Playhouse, now under construction. This expansion and addition of a new 436-seat facility will be The Stage Theater’s new home. Located at 217 Locust Street, follow the progress of this new theatre at nebraskacommunitiesplayhouse.org.

Youth theatre is also a summer staple. Theatre Arts for Kids and YAAL (Youth Actors Academy of Lincoln) cancelled in person productions during the summer and conducted all classes online. For the latest classes and performances for 2021 go to tafk.org and yaal.org.

Nebraska Wesleyan University Theatre; and Nebraska Repertory Theatre and the Lied Center for Performing Arts at the University of Nebraska-Lincoln do not have summer seasons. For a schedule of what shows are being produced during the rest of the year and how you might access them, check their websites at nebrwesleyan.edu/theatre/current-season, nebraskarep.org, and liedcenter.org respectively.