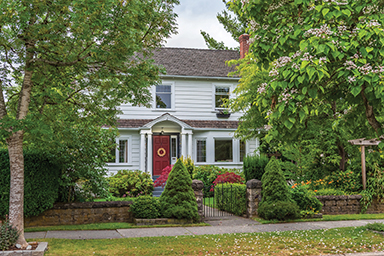 Houses in suburb at Summer in the north America. Luxury houses with nice landscape.

There are more than 70 neighborhoods in Lincoln—with new ones being planned and built right now. Here are just a few. Contact information for all of Lincoln’s neighborhood or voluntary homeowners’ associations are listed at lincoln.ne.gov/cIty/urban/neighborhoods/index.htm.

This developing community is east of the airport and north of Interstate 80. Defined by its large, elegant, homes and new, luxury apartments, Fallbrook also includes an office park, YMCA, middle school, supermarket, and a charming town center. It also has a farmers market during the season. Visit fallbrookusa.com for more.

Statuesque trees, elegant older homes, and winding streets define this neighborhood. This area grew after the Country Club of Lincoln was built on South 24th Street in 1903. It still stands today, and includes their beautiful golf course as a point of pride for its members and nearby residents. For information on the Country Club Neighborhood Association, visit ccnalinc.org.

The College View neighborhood, located along South 48th Street near Calvert, grew up around Union College, a Seventh-day Adventist school built in the early 1900s on the highest elevation in Lincoln. When it was built, the city agreed to build a trolley line to the college from downtown Lincoln and for a time the new college campus became a destination for family outings. This charming area has an attractive mix of small, independent businesses that reflects its past as a separate village. College View now hosts a popular Sunday farmers market with plenty of parking. For more information visit facebook.com/college.view.nebraska.

The Near South neighborhood is one of the oldest in the city and features a number of grand old homes of historical and architectural significance. Close to downtown, this neighborhood has single-family dwellings, both large and small, and eclectic, converted apartments popular with young adults and college students. Some of Lincoln’s bed and breakfasts are in this area as well. They offer a quiet, charming alternative to the city’s larger hotels. This neighborhood is located between G and South streets, from 13th to 27th streets.

A popular spot for youth in the area is the F Street Community Center, found in the northwest corner of the neighborhood. The facility offers many youth and adult programs, pick-up basketball games, weight machines, book clubs and cooking classes.  For more information visit nearsouth.org.

In far northwest Lincoln, Arnold Heights, popularly known as Airpark, originally began as housing for the Lincoln Air Force Base. When the base closed in 1966, the area was annexed by Lincoln. The neighborhood continues to be developed with the addition of more duplexes and single-family homes. The public pool is a well-liked destination on hot summer days, and the population rises significantly whenever an air show is in town.

The North Bottoms, also known as the Russian Bottoms, was settled by Volga-German refugees from Russia. It’s directly north of the University of Nebraska-Lincoln downtown campus, and many of its small houses are now rented by students. New student housing complexes are also being built in this neighborhood which is home to some of the city’s oldest parks. To learn more about these early Lincoln residents, visit the Germans from Russia Museum win the South Bottoms neighborhood, south of the Haymarket district.

Havelock began as a separate village in the 1880s and was home to a Burlington Railroad locomotive assembly and repair shop as well as an aircraft manufacturer. It was annexed by Lincoln in the 1930s. Located in northeast Lincoln, along Havelock Avenue, it’s home to the original Misty’s steakhouse, Havelock Furniture, and the Joyo Theatre, an old-fashioned theatre enjoying a new life with second-run movies, cult films and movies for kids. The area has a truly small-town feel, with many opportunities to get out and mingle with neighbors, such as the popular weekly farmers market. For more information visit havelock-ne.blogspot.com.

University Place, located along North 48th Street between Leighton Avenue and Adams Street, inherited its name from historic Nebraska Wesleyan University. The neighborhood also offers a number of parks, a swimming pool, a Wednesday farmers market and other recreational activities. Small businesses dot the side of 48th Street in the commercial district, where one can find an assortment of small specialty shops and favorite local eateries. University Place is also the home of the LUX Art Center, a community art gallery and shop that offers a variety of art classes for children and adults. Visit upcolincoln.org for more information on this community.

More and more apartments and condos are being built downtown and in the Haymarket, with many more planned. In addition to student housing, there will be shops, a new boutique hotel, and luxury apartments. A full-service downtown grocery store is now open on Canopy Street in the Haymarket.

Belmont is just north of Cornhusker Highway and south of Superior Street. Its close location to Interstate I-80 makes this neighborhood ideal for commuters. The local recreation center offers programs from summer day camps for youth to table tennis and a gym.

For decades, the area was home to Lincoln’s first amusement park, with a wooden roller coaster, steamboat rides, a funhouse and bumper cars. Now it boasts picturesque lakeside homes and condos with a view. Summer or winter, Capitol Beach is a beautiful location. See page 82 for a history of Capitol Beach.

Located between 66th to 84th and O Street to Holdrege, Meadowlane has its own neighborhood pool, an elementary school and shopping district where Honest Abe’s Burgers and Freedom sells some of the best burgers in town. Its mid-century brick homes are increasingly popular with new home buyers.

Lincoln truly is a big city with a small-town feel. Each neighborhood brings its own unique advantages and personality, adding up to a unified community. Together, all the neighborhoods work to make Lincoln such a good place to live.