A chef is an artist 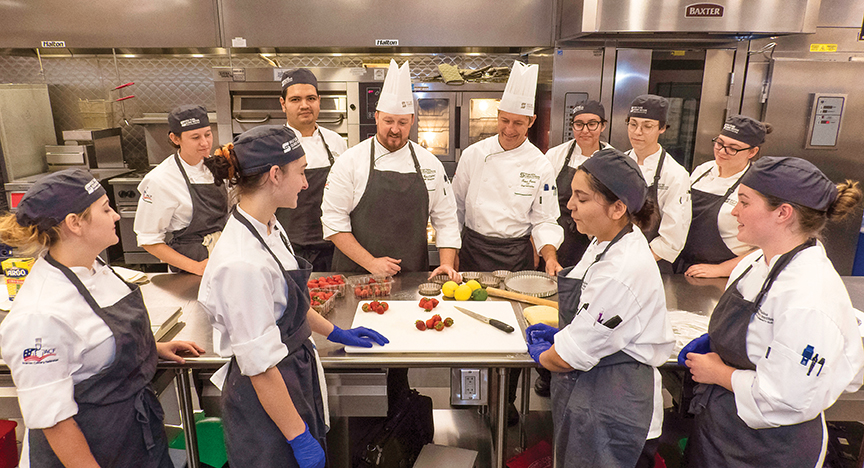 by Jeff Korbelik and Catharine Huddle

As you’ll see below, Lincoln has plenty of established
favorite chefs.

It’s also got a fairly new up and comer in Nic Webster, who, with Brien Sweeney and Dane Bass, is turning out classic Italian and French cuisine as well as Thai and other Asian dishes, street tacos and lots of other dishes through The Bistro, which offers food at Marz Bar, 1140 O St., and at Code Beer Co., the Happy Raven and Kinkaider Brewing Co. They do catering, too.

Webster, 28, started working at a wings joint when he was 22, mostly frying things. He moved on to a dishwasher position at the Lincoln Country Club, where, after a couple of months, he was cooking on the line and quickly became a “salad chef,” then the club’s sushi guy. A year and a half later, he moved to the Venue, helping with banquets and then becoming the pastry chef.

He left to cook briefly at Whole Foods and help open MoMo’s Pizzeria and Ristorante, where he got to help design the kitchen and menu and became, as he calls it, “the everything guy.”

After that, he worked for an “angry Irishman” at Methodist Hospital in Omaha, where, for the first time in his young life, he found himself with paid vacation time. He used some of that time to study with a German chef in Colorado and then to occasionally run a pop-up kitchen at Marz in Lincoln. Word spread quickly that the Wednesday-Saturday offerings were exceptional, and the gig morphed into The Bistro.

Webster, Sweeney and Bass do their cooking in rented space at The Talon Room and still offer food at Marz four nights a week, as well as street tacos and other fare at Code Beer, the Happy Raven and Kinkaider Brewing, plus the catering.

The menu at Marz is different each week. Webster’s favorites are classic French and Italian dishes, and he loves making Thai food. The three make nearly everything from scratch.

“We just try doing something that people have never had,” Webster said. “I love it.”

It seems a lot of customers do, too. Search for The Bistro in Lincoln on Facebook to find out where and when to find them.

And check out these other local chefs.

Co-owner and executive chef Reese Hummel came to Lincoln in 1983 to work at The Cornhusker, since then he has helped Misty’s remain one of, if not the best steakhouse in Lincoln, with half a dozen steak choices as well as three cuts—6-, 9- and 12-ounce—of its famous prime rib. The restaurant, which Bob and Grace Milton started as a bottle club in 1963, also features a wonderful seafood selection, including lobster tail. Check them out at mistyslincoln.com.

Erik Hustad and his partner, Gabriel Lovelace, broke into Lincoln’s dining scene with a food truck in 2012. From there, they opened Honest Abe’s, which quickly became Lincoln’s best burger joint with a variety of gourmet burgers and the restaurant’s signature Freedom Fries. Other projects over the years have included tapas (Sebastian’s Table), tacos (Come Se Taco) and cookies (Sasquatch). The duo turned the downtown Sebastian’s into an Honest Abe’s, but resurrected Sebastian’s in late 2018 in east Lincoln, where it’s become a hit. See more at grounduprestaurants.com.

After working in kitchens at such restaurants as the legendary Lincoln Exchange, Nader Farahbod opened Billy’s in 1986 and has never looked back. The restaurant, in an elegant house near the state Capitol, is one of Lincoln’s premiere fine-dining establishments, known for its steak, seafood and lamb entrees. A people person, Farahbod is known to frequent the dining room to visit with patrons and share a joke or two. See billysrestaurant.com.

Jonah King has been a part owner and CPO (chief pizza officer) with Anthony Bonelli’s crew since the south Lincoln pizzeria opened in 2014. Since then, the restaurant, under Bonelli’s guidance and King’s culinary aptitude has become one of Lincoln’s hottest and hippest places, where patrons pair fine wines with Neopolitan-style pizza or lavish Italian entrees. More, momospizzeria.com.

Under co-owner and chef Sean Carmichael’s guidance, ChezSoDo, and before that, Chez Hay, has become one of Lincoln’s top caterers, providing tasty fare for intimate or large gatherings. He and his partner, Starr Carmichael, moved their operations to the corner of 11th and K streets in early 2018, where they’ve turned the former Duggan’s Pub into a cafe, coffee shop and rental hall. Learn more at chezhay.com/chez-sodo/.

Following in the footsteps of their father, John Kazas of the one-time downtown fixture Papa John’s, and his brother Mike have turned the Parthenon into one of Lincoln’s premiere ethnic restaurants, becoming known as much for its entertainment (belly dancers) as it is for its delicious Greek entrées and desserts. Don’t be surprised to hear a few yells of “opa!” especially if a dish breaks. More, theparthenon.net.

Rachel McGill and partner Marypat Heineman took over the popular downtown restaurant in August 2016 and have maintained its fine-dining excellence. McGill, who worked as a sous chef for two years under previous owner/executive chef Travis Green, is a whiz in the kitchen, offering new twists on such Dish favorites as duck, seafood and steak entrées. More, dishdowntown.com.

A graduate of the Southeast Community College culinary program, Aaron Young ran a restaurant in Lincoln for a short time before focusing on catering. He was recognized by the Nebraska Restaurant Association in 2012 with the Rising Star Award and received the Iron Chef Award at the Junior League of Lincoln’s Dish It Up event in 2014, 2016 and 2017. See chefauchef.com.

Narges Montazer is a fixture at farmers markets in Lincoln and operates a wonderful Mediterranean restaurant in the strip mall at 56th Street and Old Cheney. She regularly changes up her offerings, serving food buffet-style. Plus, she’s one of the friendliest people around, making you feel as if you’re in her home rather than a restaurant. Look for the restaurant at Daffodil Mediterranean on Facebook.