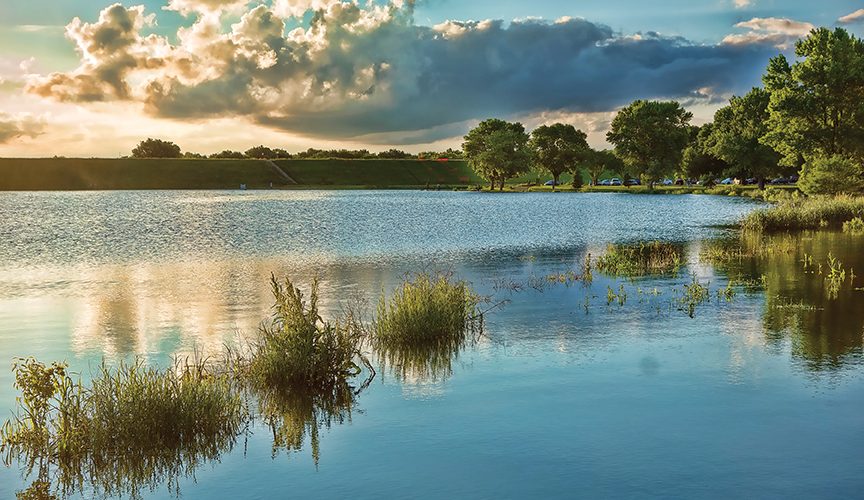 No matter where you live in Lincoln, there is a park or trail waiting to be enjoyed. More than 130 parks dot the city for citizens to swim, play or relax. Outdoor recreation in visually soothing environments is attractive to both families and retirees.

Parks inspire us with their colorful scenery and wildlife. The fresh air and sunshine bid us to relax after a hectic day. Many Lincolnites take to the open air to walk, bike, or jog on Lincoln’s many trails.

The park in southwest Lincoln features tallgrass prairie, woodlands, wetlands and a stream. Since 1963 the Nature Center has served the Lincoln area as an environmental education center and wildlife sanctuary. The eastern area of the park has conifer-lined allées and naturalistic ponds.

A set of sandstone columns graces the area near the duck pond. The pillars were once part of the old U.S. Treasury Building in Washington, D.C. They were presented to Lincoln in 1916 by Cotter T. Bride, a close friend of William Jennings Bryan. After residing in Antelope Park, the pillars were placed in Pioneers Park in the mid-1970s.

The rest of the parkland has an informal design with a picnic area, winding roads and paths. The 668-acre park has eight miles hiking trails. In the winter, Pioneers Park is a favorite spot for sledding.

Pinewood Bowl, set in the center of the park, is an outdoor theater is a hub of activity as it hosts nationally-known bands each summer. A community musical theater production is also a popular event. For more about Pinewood Bowl go to page 34.

The nature center and virgin prairie on the west end of the park are home to small herds of elk and bison. The Pioneers Park Nature Center is open during all seasons for people of any age. Visitors enjoy the exhibits that interpret native wildlife and regional ecology.

Pioneers Park was listed on the National Register of Historic Places in 1993.

Holmes Lake Parksurrounds Holmes Lake, a 112-acre lake located on Antelope Creek within the city of Lincoln. It is the center of activity for golf, sand volleyball, baseball, ice skating, canoeing, kayaking and fishing. Fishing enthusiasts can often be seen fishing for several kinds of bass, crappie, walleye and catfish.

There is a playground for the kids, as well as picnic tables, grills and covered gathering space. The walking path around the lake provides a picturesque view of the area. This park is home to many community events like Family Fishing Night and Water Fest. This popular spot is located in southeast Lincoln.

Antelope Park is home to the three public gardens: The Hamann Rose Garden, the Rotary Strolling Garden and the Veterans Memorial Garden. Visitors enjoy the colorful gardens as well as the solemn beauty of the Veterans Memorial Garden. With more than twenty military monuments, the garden is a place to reflect on the sacrifices made for our freedom.

Antelope Park boasts the largest playground in Lincoln. The playground has spaces with playground equipment for kids of all ages. There are trails around the park, lots of green space, plenty of picnic tables and the Auld Pavilion for special events.

J. J. Yost, director of construction for the Lincoln Parks and Recreation, says the goal of the city is to have a park within a 10-minute walk of every resident. The city is close to achieving that goal as it has dedicated 7,303 acres to park and golf courses. More than half of the parks are neighborhood or mini-parks, many with playgrounds and picnic tables.

The neighborhood parks provide musical events and other activities in a natural setting.

Stransky Parkat 17th and Harrison is known for its waterfall and summer concert series.

Trago Parkoffers a fun splash pad for kids and doubles as a playground in the off-season months. The splash pad is open Memorial Day thru Labor Day from 11:00 AM-7:00 PM.

Woods Park, in the center of Lincoln at 33rd and J streets, is a destination for tennis players. It sports a new indoor tennis center and 12 outdoor courts. The swimming pool is popular as are the other sports courts and activity centers.

Tierra Park Skate Parkat 27th and Tierra is a newly renovated skate park. It is also home to a 9-hole disc golf course.

Peter Pan Park at 32nd and W streets has a skate park along with volleyball, basketball and tennis courts.

Yost said the city is fortunate to have the support of the Lincoln Parks Foundation to help fill in the funding gaps for parks. Lots of small parks make the outdoors accessible no matter where they live. The maintenance is uniform at all parks, Yost said. “The parks truly benefit all the citizens.”