Home in The Bottoms 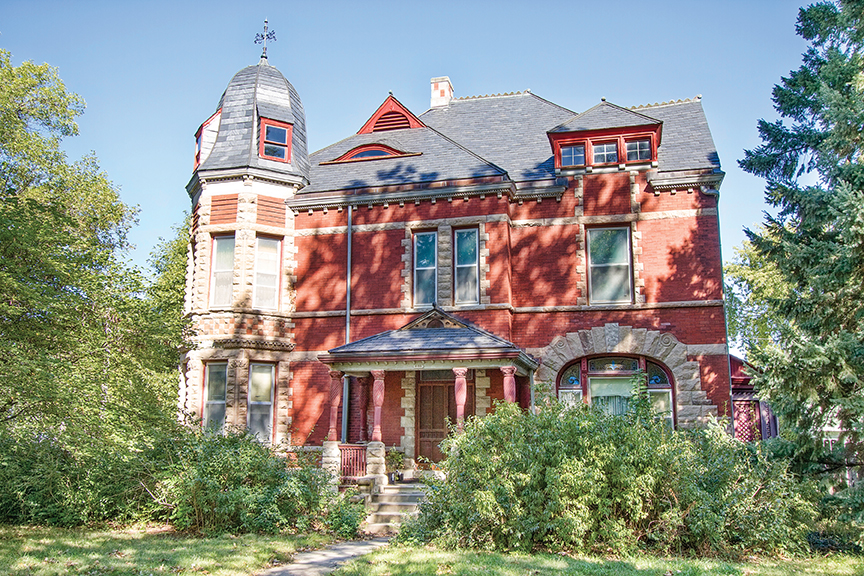 Two Lincoln neighborhoods near Downtown share related names and heritages—the North Bottoms immediately north of UNL’s Memorial Stadium, and the South Bottoms adjacent to Downtown to the west and southwest. The “Bottoms” names simply refer to these neighborhoods’ positions close to Salt Creek—in the “bottom lands” or floodplains of that stream that defines the west boundary of South Bottoms before curving around the north side of North Bottoms.

When European-American settlers established the town of Lancaster in 1859, they laid out a few streets around present-day 9th and O Streets, on the terrace above the floodplain of meandering Salt Creek. When Lancaster was chosen as Nebraska’s capital in 1867, the Original Plat of the renamed “Lincoln” paid little heed to the Creek and its bottom lands, extending westward to present-day South 1st Street, and north to 14th and U Streets.

Lincoln boomed from a population of 2,500 in 1870 to 13,000 in 1880 to 55,000 by 1890.   Neighborhoods sprang up around and to the south of the Capitol with mansions and smaller houses on ample lots. But for immigrants and other families of lesser means, cheaper alternatives were found on the flood-prone lands along Salt Creek, near key employers such as the rail yards, brickyards, and warehouses.

A large majority of Lincoln’s immigrants in the late 19th and early 20th century were Germans from Russia. In the late 18th century Czarist Russia had attracted many Germans to settle in its Volga region and other lightly populated areas, offering land and assurances of autonomy to retain their German language, religions, and culture.  In the late 19th century, the Russian government attempted to assimilate these largely agricultural villagers into Russian society, prompting tens of thousands of ethnic Germans to emigrate from Russia.  Lincoln became the largest urban settlement of these people, in the North and South Bottoms neighborhoods.

The smaller North Bottoms neighborhood is bounded today by the Burlington Railroad tracks on the south, Interstate I-80 on the west, Military Road to the north, and Antelope Valley Parkway on the east. Its settlers largely came from a pair of villages in Russia. They built small homes on narrow parcels, often adding summer kitchens, chicken coops, or even second houses in the narrow back yards.

Most of those outbuildings are now gone, but the neighborhood retains most of its historic houses and community buildings. Immanuel Church at 10th and Charleston occupies an early 20th century, wood-frame building, which has been adapted and remodeled. On the southwest corner of 9th and Charleston is a handsome brick church of 1916, originally the German Congregational Salem Church, one of five churches in the North and South Bottoms designed by Lincoln architect Alfred W. Woods. The former St. John’s Evangelical Lutheran Church, a wood-frame structure of 1927 at 1324 New Hampshire Street, was also designed by A. W. Woods.

Diagonally across the intersection from Salem Church is the former Hayward Elementary School.  Its central portion dates from 1904, with additions to the south (1913) and the north (1925-6). Now called Hayward Place, the school was renovated as condominiums in the 1980s and is listed on the National Register of Historic Places for its significance in architecture and social history, recalling special programs to meet the needs of the immigrant children.

The South Bottoms was the larger of Lincoln’s two enclaves of Germans from Russia, bounded on the east by South 9th Street, south by A Street, and west by Salt Creek. The north boundary is more uneven, extending nearly to O Street on the northwest corner, but only as far north as G Street on the east side. That whole area, containing some 700 buildings, is listed in the National Register of Historic Places for its association with German from Russia immigration.

South Bottoms has a rich assortment of residences, churches, and other historic assets. Cooper Park bounded by F, 8th, D, and 6th Streets is the oldest park in Lincoln, established by the Original Plat of 1867. Park School on the north edge of the park was built as an elementary school in 1926 in place of a structure of the 1890s.  It was expanded and adapted to serve middle school students in the 1990s.

At the southeast corner of Cooper Park is the William Tyler house of 1891, one of Lincoln’s finest Queen Anne buildings, designed by architect James Tyler for his brother, a stonemason and supplier of building materials. Diagonally across the intersection from the mansion is the former German Evangelical Lutheran Immanuel Church and School, also designed by James Tyler and built in 1910.  South of the Immanuel buildings are some of the neighborhood’s most characteristic small, closely-spaced houses, with entrances to the side and only windows facing the street, recalling the types of houses found in the Russian villages left by the immigrants.

While Germans from Russia were the predominant ethnic group in South Bottoms of the late 19th and early 20th century, the neighborhood was also home to other groups as well—poor people living alongside other poor people. Early Mexican immigrants into Lincoln settled in the northwest corner of South Bottoms. African Americans had homes throughout the area. The stuccoed brick church at the southwest corner of 9th and C Streets is still home to the oldest congregation of Lincoln’s African American community, Quinn Chapel African Episcopal Church, founded in the early 1870s.  The church building dates from 1900, but was moved four blocks in 1915 and placed on the current location. It was enlarged and remodeled in 1926, according to designs by the busy Alfred W. Woods, who not only designed for many denominations in Lincoln, but also in nineteen states across the country.

Today the North and South Bottoms remain important housing areas for homeowners and renters. The proximity of North Bottoms to UN-L’s City Campus attracts many students, while the South Bottoms provides some of the most affordable homeownership opportunities in Lincoln, and remains an important “port of entry” for Lincoln’s modern-day immigrants.