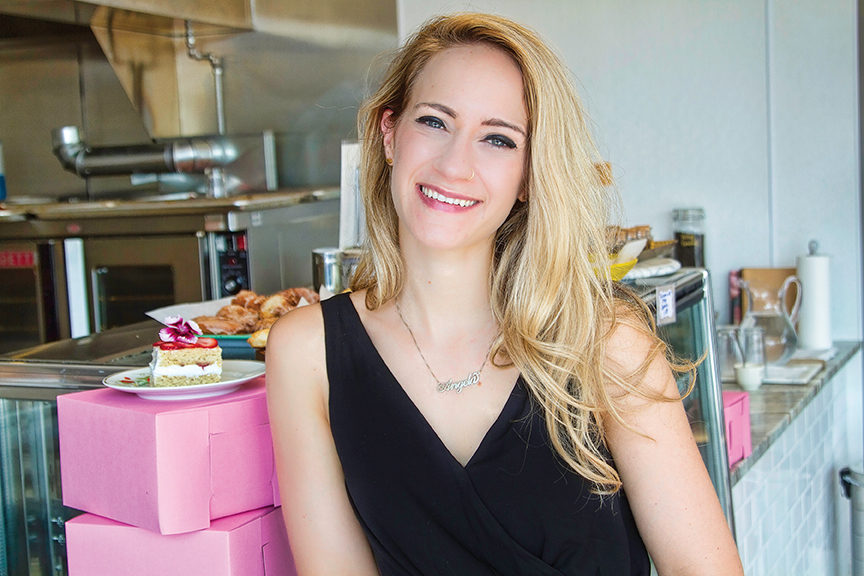 Any wise man will tell you Lincoln is full of sweet ladies. But some of those women are sweet not just figuratively but literally.

Some of them have built their own businesses around their love for cakes, pastries and candies, and three of those sweet businesses are featured here.

Her passion for baking and her popularity on social media inspired Angela Garbacz to open Goldenrod Pastries in May 2015.

Angela, a Lincoln High and UNL grad, had worked in professional kitchens since she was 16. She attended the International Culinary Center in New York City in 2008 but turned down job opportunities to return to Nebraska.

While working in international marketing for a local business technology company, Angela started blogging about baking in spring 2014. Her readers asked if they could order some of the concoctions she wrote about, and she began to think that maybe the “casual catering” she’d been doing for years wasn’t enough.

“I saw a need for a bakery,” she said, and started to research a good location.

She found the ideal spot in late fall 2014, right on the corner of 48th and Prescott in College View. Remodeling began in March 2015, and Garbacz quickly learned that fulfilling her dream would require more than just flour, sugar and talent.

She learned how to get financing, how to work with an architect and contractors, and how to get all the permits and inspections necessary to operate a commercial kitchen. Once Goldenrod Pastries opened, Angela learned accounting and management. And, far from finding it to be a chore, she enjoyed what she learned. “I love the entrepreneurship side as much as I do the baking,” she said.

Angela named her business after the state flower to illustrate her deep connection to Nebraska. “I couldn’t do this anywhere else,” she said.

She hired another pastry chef and someone to serve customers, and the three women staff Goldenrod Pastries Tuesdays through Fridays. Their fare during the early months focused solely on sweet pastries, from spectacular wedding cakes to tiny tarts, almost too exquisite to eat. But it expanded in the fall to include savory items, too.

Do you have food allergies—gluten, dairy, eggs, soy, sugar? Angela makes treats for you. She has a grain-free chocolate cake so good it made a gluten-free customer cry.

Angela said the best part of her new venture has been watching Goldenrod Pastries quickly evolve into a place where people meet for conversation—and sweets. “The response from the community has been heartwarming,” she said. In fact, “the reality has been even better than the dream.”

Donna Roehrs takes her cake-baking business seriously and considers every cake she creates a work of art. “I want to look at each one and say, ‘That’s beautiful,’” she said.

After 26 years, it seems obvious her customers agree that the confections they order at lincolncakelady.com not only taste wonderful but look wonderful as well. Customers keep coming back for more, and Donna says all her business comes from word-of-mouth recommendations.

She’s had plenty of business. At one point, she was making 1,200 to 1,500 cakes a year out of the commercial kitchen in her home. For many years, she hired someone to help her. Now, though, she’s cut back to 10 to 15 cakes a week and does them all herself.

She bakes for weddings, anniversaries, birthdays, baby showers and any other occasion where people want to serve something special. And while she works to make every one of her cakes beautiful, she says wedding cakes are the biggest challenge. “They must be perfect,” she said.

Her cakes have been featured in Nebraska Wedding Day magazine and other publications, and she has made fake “display cakes” as part of the Lied Center’s Table Inspirations, a semiannual fundraiser. Lincoln Cake Lady has become such a recognized name—and so easy to remember—that Donna said she doesn’t even have to hand out business cards anymore.

Whether the cake is for a wedding or another occasion, Donna takes all her orders online at lincolncakelady.com. Customers choose the cake flavor, theme and size they want and what, if any, lettering should be included. She said all that specific information helps her meet her customers’ expectations. She can even decorate a cake to match a specific color swatch a customer provides.

Donna loves to make cakes of all sizes and varieties and doesn’t have a favorite among her creations, but her customers seem to be especially fond of the white cake with fresh raspberries. “I think that one accounts for 65 percent of the cakes I make,” she said.

Elizabeth Erlandson and Ardith Stuertz have been Lincoln’s charming “licorice ladies” since 2002. Actually, they were given the name a bit later, but they started their business, Licorice International, out of their homes 14 years ago. Now they own a popular shop in Lincoln’s Haymarket, offering 160 different kinds of candy—mostly licorice—from all over the world.

Why licorice? Well, it was a personal connection, Erlandson said. Her husband has always loved licorice, but it had become so hard to find, they were ordering his favorites from someone in New York state. While placing an order, Elizabeth told the supplier to call her if he ever wanted to sell his business. The very next week he asked if she’d buy him out.

Elizabeth asked her friend Ardith if she wanted to become her partner in a licorice business, and in a matter of minutes, they agreed to take the plunge.

The two women and their husbands began by selling 40 varieties of licorice by mail order, then on the Internet. By August 2003, they were running out of storage space in their homes and moved their business to a space in College View.

They kept growing, and by 2005, the women began looking for a larger space. They settled on their current location on 8th Street in the Haymarket, which Ardith calls “an awesome find.”

Licorice International currently employs six people full time and another four part time. While they still fill a lot of orders online, they estimate that 60 percent of their business now comes from in-person sales at their popular Haymarket store. It’s here they have their enormous variety of licorice and candy beautifully displayed. There are so many—salty, sweet, red, black, kosher, Swedish, French, twists, buttons, scotties.

The licorice ladies have found lots of ways to lure people to their product:

All along, the sweet licorice ladies have had great fun, they said, meeting people’s craving for licorice —and doing it with a friend.