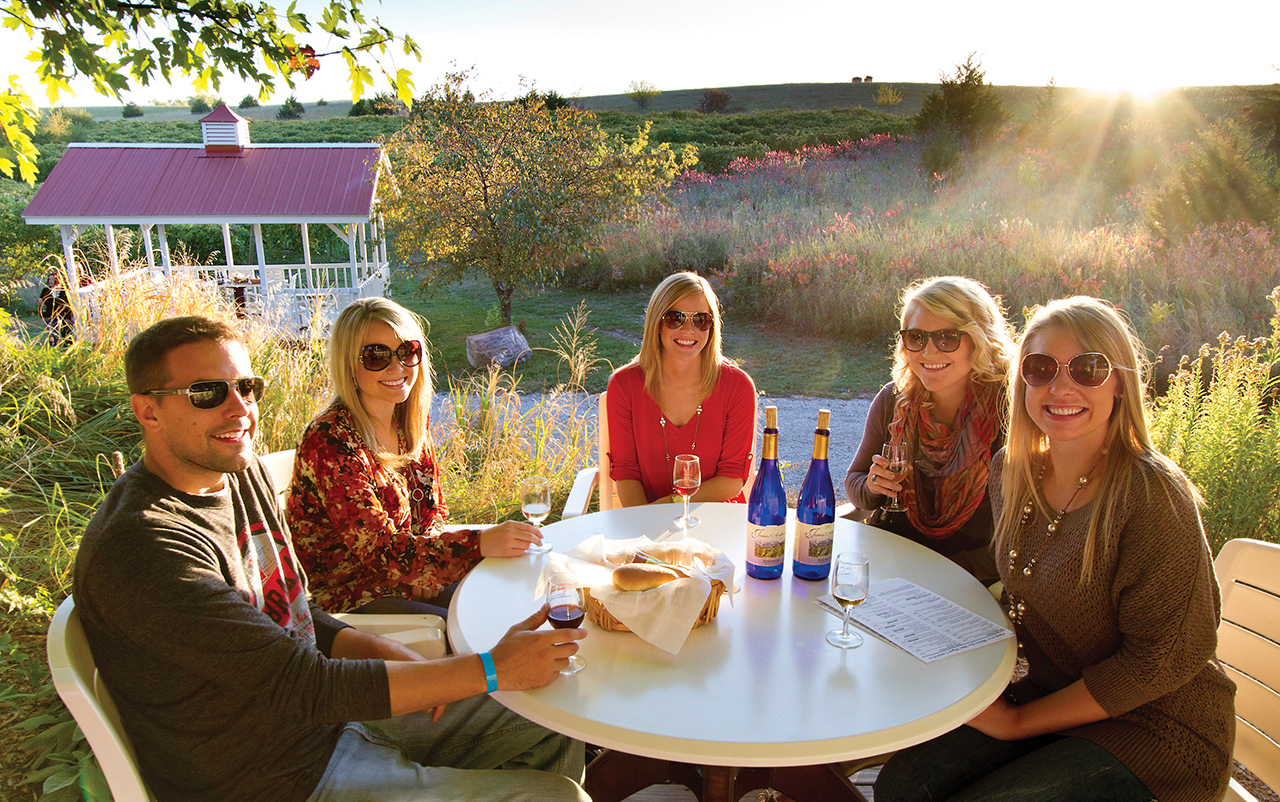 Whether you’re a wine connoisseur or someone who just enjoys the occasional glass, Nebraska has a wine and a vineyard for you.

Nebraska wine makers say that although their wine may be different from wines made in other regions, it is just as good—maybe even better—than a California or French wine. And they’d be happy to show you at one of the multiple wineries around Lincoln.

Located just north of Lincoln, James Arthur Vineyards is Nebraska’s largest winery and is one of the oldest in the state. The family-owned business was opened 16 years ago by Jim Ballard, who started growing grapes on his father-in-law James Arthur’s land. Ballard says he started making wine as “a hobby that got a little out of control.” He had a professor at the University of Nebraska-Lincoln who talked about vineyards in Nebraska, so Ballard decided to try planting grapevines himself.

“One thing led to another, and we got the winery up and running,” Ballard said. “It was a hobby that became a full-time-plus business.”

James Arthur Vineyards features a tasting room and a reception facility that often features live music. They also host special events like a renaissance festival and murder mystery night. Ballard said his goal is to create an overall fun experience for visitors.

“It’s not just about selling wine,” Ballard said. “People will come out and try the wine. We realize that. But more importantly, it’s about the whole experience: coming out and making James Arthur Vineyards a destination point. It’s fun to watch people come and stay two, three, four hours, just relaxing and enjoying the company. It’s not only about the wine, it’s about that whole experience.”

Linda Wunderlich’s business, WunderRosa Winery in Roca, also started out as a hobby. Wunderlich’s late husband used to make wine in Texas prior to buying land in Nebraska in 2004 where they began planting LaCrosse and Frontenac grapevines. Before her husband died in 2008, Wunderlich told him she would finish planting the vines. The winery opened a year later.

WunderRose Winery offers a wine tasting session where visitors can taste five different wines for $5; or they can walk through the vineyard before enjoying a glass of wine on the large outdoor porch.

“We have a neat old barn that people can get married near, with a beautiful view of the Lincoln skyline and Capitol building,” Wunderlich said. “You can see for miles and the view is lovely in the evening. It’s a great place to relax.”

Wunderlich said the winery has had visitors from across the country who want to experience Nebraska wine. “We have good wine, and people don’t realize that until they taste it,” she said. “We offer a range of sweet to dry. It’s got a different taste than a California or an East Coast wine, but it’s good, and people like it.”

Deer Springs Winery is another family-owned business located just east of Lincoln. The property was homesteaded by the family in 1876 and the old farmhouse was renovated into the winery’s tasting room.

“More and more people are realizing we have a thriving winery business in the state,” said Jennifer Reeder, a wine maker at Deer Springs Winery. “It’s something people enjoy, and they like that it’s a product grown in the state.”

Wine makers say growing grapes in Nebraska carries its share of challenges. In order to survive Nebraska’s cold winters and harsh climate, the grapes must be cold-climate hybrids.

And because Nebraska weather is constantly changing, there is always something to watch out for. “Growing grapes is truly an agricultural endeavor,” said Reeder. “And like all agriculture, you have to worry about things you can’t control, like a late freeze in the spring or hail damage,” Reeder said. “Although these challenges are similar to growing grapes in other areas.”

Ballard said, “Many of the grapes are unique, so people aren’t familiar with the types of wines we offer. Consumers often have the perception that Nebraska grows only corn and soybeans. Getting people past that perception is very important.”

“That’s part of educating people about the grapes we grow, and I think that’s what makes us special,” Ballard said. “We are not known as a wine or grape growing area, but creating the beautiful wines we do really puts Nebraska on the map. We can say ‘hey, you can grow grapes here, and you can also make some very good wine.’”

The growing number of visitors and Nebraskans learning about local wine is helping send the industry to the next level, said Jennifer Montgomery, the first full-time executive director of The Nebraska Winery and Grape Growers Association. “It’s definitely a local industry that is taking off,” she said. “There is a lot of focus on wine quality in the state, and that has helped us gain a reputation as a sustainable industry with an excellent product.”

The 100 member Nebraska Winery and Grape Growers Association was formed 16 years ago for this is a relatively new Nebraska enterprise, but the industry has really expanded in the last seven years, Reeder said.

“Raising awareness is important both for wine lovers across the country and those in the Cornhusker state. It’s one thing to want people across the country to know about Nebraska wines, but we also have to make people in Nebraska aware that there is a thriving industry in their state.”

Nebraskans and visitors alike should become accustomed to seeing Nebraska wines on the shelf next to imported bottles.

“It’s a growing industry; it’s going well,” Reeder said. “People can expect to enjoy the excellent wines of Nebraska for a long time.”