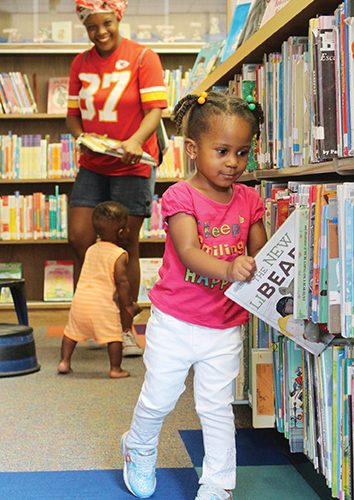 Gail McNair, executive director of the Foundation for Lincoln City Libraries, likes to tell the story a real estate friend shared about a prospective executive’s wife considering a move to Lincoln; she asked first to see a school and a library. Her reason: Schools and libraries are indicative of the value system of the community.

That’s a reason McNair seconds and why she believes so strongly in the mission of the job she has held since 2009. Raising private funds to support the programs and services of Lincoln City Libraries upholds and enriches the values of the community that longtime residents have come to know and newcomers can’t wait to experience.

And now with a potential bond issue facing voters in 2022 to support a new central library perhaps on the downtown Pershing Center site, the importance of libraries is front and center. And the bond issue includes much-needed refurbishment to the existing libraries, McNair added.

In September 2021, there were 264,000 registered library patrons, said McNair. They checked out and/or downloaded 282,090 items, a 4.5% increase from September 2020. No question that the library is a service Lincolnites expect and depend on.

The Foundation will be raising private dollars to support the bond issue and to lower the bond ask, McNair said. Since 1954, the foundation has been tasked with raising funds, and the ways have expanded. An annual book sale is a tradition of many years, but the foundation, which has run the sale since 2009, has grown it to the point that only the Lancaster Event Center is big enough to hold it. People line up outside waiting to get in to purchase books for 50 cents to $5. Volunteers with the foundation spend three days setting it up, then a private, fee-charged event for booksellers and patrons kicks off the four-day, free, open-to-the-public sale, set for the week of October 10 this year.

Another annual fund-raising party takes place April 21 this year at the Country Club of Lincoln. But the mainstay of the foundation is the Friends of the Lincoln City Libraries, a membership group that got its start when McNair came on board. With fees beginning at $25, members add to the foundation’s coffers and volunteer for other duties, such as the book sale. In turn, they get coupons to use to replace fines when they have overdue library items, a whoopsie that happens to all of us at some time.

In addition to the main library, Bennett Martin, at 14th and N streets, the system sports four quadrant libraries—Gere, Walt, Eiseley and Anderson—and South and Bethany neighborhood branches. Plus there’s the itinerant bookmobile that serves Lincoln and Lancaster County.

The library also sponsors a One Book-One Lincoln annual communitywide read that launched in 2002. A selection committee pares down the list of library patron nominations, and three finalists are announced on Memorial Day. Community members read and then cast a vote for a winner, announced on Labor Day. Book discussions ensue, and often the author comes to town or addresses folks on Zoom.

McNair sings the praises of library director Pat Leach and her staff for keeping the libraries open during the early days of the pandemic, when so many others across the country shut down. The staff prepared book bundles for patrons and patiently helped folks learn how to download books, so reading continued to be part of their routine.

But libraries are much more than books, McNair stressed. The free use of computers allows folks to apply for jobs that they couldn’t do otherwise, and the library offers space for volunteers to offer help for those filing taxes. And with meeting rooms available for public use, libraries serve as a community convening place for numbers of groups.

In her role, McNair guides the foundation to raise funds to make sure the libraries have something for everyone. But she willingly shares the credit.

“The foundation is only successful because of volunteer involvement and the public supporting
it,” she said. “Luckily Lincoln is very community- and education-oriented, and the libraries are part
of that.”