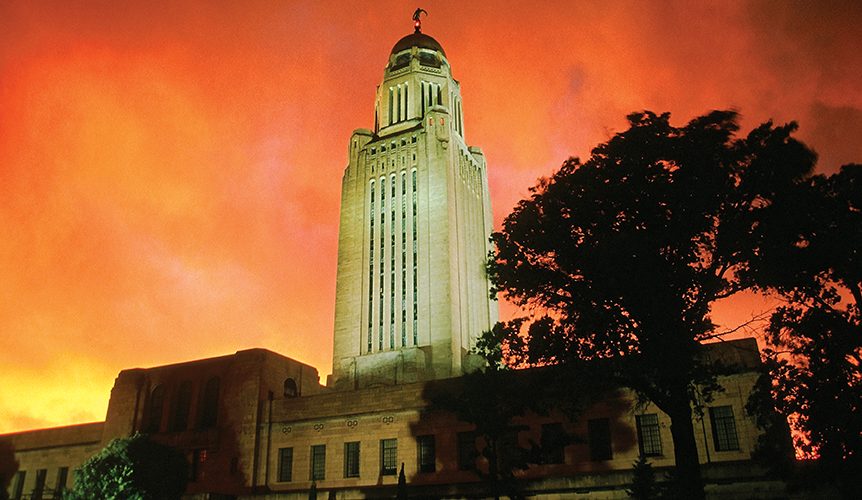 Nebraska’s state Capitol building is the nation’s first modern statehouse. But the building you see at 1445 K Street on the south edge of downtown is not the original. It’s actually the third one built in the same spot, after the first two territorial capitols (1855 and 1858) that were built in Omaha. Moving the seat of government out of Omaha, the state’s largest city, southwest to the tiny hamlet of Lincoln was a controversial decision. The editor of one Omaha paper opined, “Nobody will ever go to Lincoln who does not go to the Legislature, the lunatic asylum, the penitentiary, or some of the State institutions.” The editor was wrong.

Fearing Omaha might ‘recapture’ the seat of government and return it to Omaha, there was a rush to finish the new Capitol in time for the legislature to convene in January 1869.

The new building (Nebraska’s third Capitol) was ready in time but almost immediately began to crumble because of construction shortcuts and inferior stone.

The fourth Capitol was built bigger but not much better on the same site. Soon after completion in 1888, it started to settle and crack and was generally in poor shape, again not properly designed to withstand Nebraska’s climate. In 1919 the Legislature passed a bill to provide for the construction of a new Capitol.

With a budget of $10M, the fifth and current building was constructed in four phases and completed in 1932 after 10 years of pay-as-you-go construction. The Legislature had embraced the modern design by architect Bertram Goodhue—a significant departure from the neoclassical style epitomized by the U.S. Capitol building. Goodhue saw the building as a monument to Nebraska’s heritage. Sadly, Goodhue died before his masterpiece was completed.

Today, the Capitol houses the main executive and judicial offices of Nebraska, and is home to the only state unicameral legislature in the U.S. The interior is stunning, due in no small part to the extraordinary tile mosaics and murals created by Hildreth Meiere.

It was the first state capitol to incorporate a functional office tower (built using an internal steel superstructure) into its design. Clad with Indiana limestone, the building has a low, wide base in the plan of a “cross within a square,” creating four interior courtyards that surround the tower. The courtyards allow for light, ventilation and a view for office occupants housed in the three-story building base. Other modern innovations included a low voltage wiring floor duct system initially created for telephone service but today accommodates a building-wide fiber optic voice and data network.

Goodhue had intended fountains for each of the courtyards but the funds to pay for them were reallocated during the Great Depression. Goodhue’s vision was not completed until the fountains were installed as a gift from the Legislature to the state in celebration of the 150th anniversary of Nebraska’s statehood in 2017.

The 400-foot “Tower on the Plains” can be seen up to 20 miles away from the city—the distinguishing feature of Lincoln’s skyline, especially from the west. The tower is topped with a gold-tiled dome and capped by The Sower—the 19.5-foot bronze finial designed by Lee Lawrie. The Sower is one of the few if not the only works of art at the Capitol that is free-standing.

The exterior of the building, excluding the dome, underwent extensive repairs between 1998-2010. Now attention has turned to the 43-foot in diameter and 26-foot-high gold-tiled dome, particularly the expansion joints between the tiles. Despite repairs completed 15-20 years ago, recent inspection by drone and human touch revealed the caulking was failing and water was seeping behind the tiles, causing many to loosen. The $1.25M project includes recaulking the joints and resetting the tiles where needed, plus some work on the drainage system. Delayed by the pandemic, the project should be completed before the end of 2021.

With repairs in process, the observation decks are temporarily closed to the public, though visitors can go up to the 14th floor and look out of the windows, just not exit the building.

No, the tiles on the dome are not real gold, rather covered with a glaze or paint that could have had some actual gold mixed in. Goodhue did test the use of gold leaf, but found it to be “insufficiently durable.” For proof, look no further than the gold leaf on the Colorado Capitol dome in Denver, which has to be replaced every so often due to hail damage and weathering, no doubt at considerable expense. In correspondence between Goodhue and his team, there were indications of their disappointment in not being able to use actual gold, causing them to conclude, “This will not be quite so splendid in effect, but we are satisfied it will be a much safer thing to do,” especially given the dome’s height.

Be sure to visit and marvel at this architectural masterpiece. As you walk up to the building, take note of the names of Nebraska’s 93 counties engraved around the base and the stone carvings representing historic events in the evolution of democracy as a form of government. Inside, Goodhue’s intentions to represent both indigenous people and Europeans who came to settle Nebraska are infused in the details, ornamentation and artistry of the public spaces. Your visit will be time well spent.