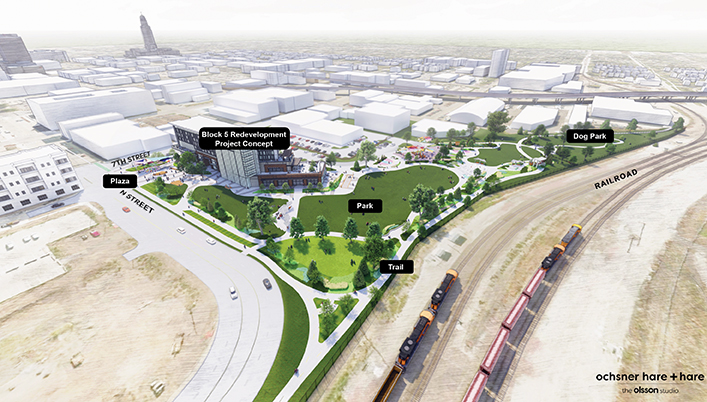 More than a decade ago, city leaders and planners took a long look at Lincoln’s future and came up with some pretty grand ideas, including building a new arena, revitalizing the historic Haymarket District, creating the West Haymarket and sprucing up downtown.

They’ve ticked off a lot of items on the to-do list, and some of the same group, plus others, convened in 2018 to take another look at what downtown can and should be.

“The downtown area is going to be that draw for people for events, the university and the state Capitol,” said Planning Director David Cary. “It’s kind of like the front door for our community, and we want it to be the best it can be.

“The seed came from the 2005 (comprehensive) plan, a really good example of what a good planning process can do with a set of goals…and then have the community get behind it and make it happen. It’s very exciting.”

Highlights of the 2018 plan include these.

Looking at O Street.  A major highway that runs through downtown and all across the city. “It needs a facelift, so to speak,” said Cary, who has been with the city’s Planning Department since 2003 and director since 2014. “We want to take downtown to a new level now.”

Planners considerde issues including dealing with the emerald ash borer, which is now threatening ash trees in Lincoln. Much of the canopy over the downtown area is comprised of ash trees, and city leaders plan to remove them and work on a replacement strategy.

The streetscape, including planting beds, etc. Cary said planners want the main entrance to downtown to look as good as it should.

The music district. The downtown music scene is already strong, anchored by The Zoo Bar, Duffy’s Tavern and the Bourbon Theatre, all near 14th and O streets. Owners of the three live-music venues already work together to coordinate shows, and all participate in Lincoln Calling, an annual nonprofit music festival in September that runs for a week and showcases live music every night. Cary says planners hope to encourage even more coordination and are considering physical improvements that could boost outdoor events.

West Park The idea is to create public green space including a dog park close to downtown on the west side of the West Haymarket.

More people are living downtown, and planners want to continue the trend and entice even more to the city’s core. That means more green space, both the park at the west edge and what Cary calls linear green space that might run along 11th Street from R to M and from M Street west to Seventh.

“We have really big rights-of-way,” he said. “The idea is to organize that space and do what we can to create planted areas that could function as nice walkways for people and people with pets—inject more green space downtown.”

The Canopy Street Market (at Seventh and N streets) offers downtown dwellers a closer place to buy food, and Cary sees more of its kind as more people head downtown to live.

“We need a critical mass to have a fully functioning neighborhood downtown,” he said. “We are there…we need to go further. …The idea is to have enough of those services so that you feel as though you can get your basics day-to- day.”

That includes quality child care and more amenities for both the large student population and growing numbers of working-age people and those who
are retired.

Downtown has matured and grown since those 2005 planning sessions, Cary said, and has come a long way since losing its department stores and other retail about 30 years ago. New retails shops are popping up, and planners hope for more, envisioning active ground floors all through the area.

“It’s a different downtown,” he said. “It’s big enough and strong enough that it can and does have those different kinds of sub neighborhoods that are a sign of a growing vibrant area. Lincoln is a very slow but steady type of downtown.”