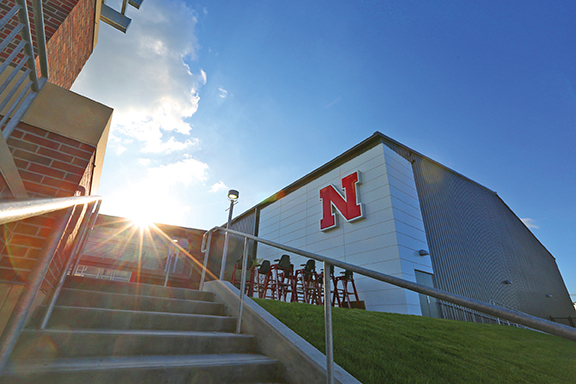 Though Lincoln, Nebraska may not be deemed a hotspot for budding tennis stars, it’s certainly on its way. With the rise of Jack Sock, a Lincoln-native who has reached a career high ATP ranking of 22 in the world and recently earned two Olympic medals in Rio, the Lincoln tennis community has seen its fair share of growth in the last several years.

The most recent boom in the tennis world was the opening of the University of Nebraska’s Sid and Hazel Dillon Tennis Complex. The new facility, which cost $18 million, has been hugely popular amongst players and viewers alike.

“We now have a home, which we never had before,” said Associate Head Coach German Dalmagro. The facility is fully equipped with locker rooms, space for meetings and a training room. Because it’s located on campus, Dalmagro said the team is saving about six to seven hours a week in commuting time.

“It’s immensely benefitting the current team,” he said. “No more long trips or not showering after practice. We can do more individuals and it’s a better place for fans to watch. It’s very inviting to anyone, which has helped recruiting as well.”

Though the University’s state-of-the-art tennis facility isn’t open to the public, Dalmagro said Lincoln has an abundance of great tennis centers available for public use.

One of these facilities is Woods Tennis Center. Since 2008, Woods has offered affordable lessons and groups for juniors and adults alike. It has recently expanded its programs to include city rec centers, public parks, schools and community learning centers across Lincoln.

“As the largest, and only, public indoor and outdoor tennis facility in Lincoln, Woods Tennis Center is the backbone for the tennis community,” said Kevin Heim, the executive director of Woods Tennis Center. “Other public and private facilities in town are definitely seeing increased participation and use, but Woods tends to be the hub of activity.”

Woods Tennis Center offers partial and full scholarships to children in the community who are able to demonstrate a passion and dedication to the sport. It also provides racquets and free court time to residents of surrounding neighborhoods who are looking for a place to practice.

Heim said one of those most rewarding parts of his job is seeing the way tennis has positively influenced so many of Woods’ players.

“Seeing a child with autism respond to tennis unlike any other activity they have participated in, having kids come through on scholarship who otherwise wouldn’t be able to afford tennis or any other organized sport experience…I could go on and on, but these are a few of the examples I see on a daily basis,” Heim said.

Though Woods Tennis Center has opportunities players of all levels and backgrounds, this doesn’t seem to affect the level of tennis that is played there. All United States Tennis Association (USTA) tournaments are played at Woods, attracting high-level players from across the state and region, as well as nationally.

“We continue to see participation increase for all ages, but especially with the juniors,” Heim said. “Not only have the participation numbers increased, but the talent has grown in its overall depth.”

Woods Tennis Center has also generated a partnership with Lincoln Parks and Recreation over the years to better serve the public during the summer months.

“We’ve partnered a number of years with Kevin to offer two four-week camps at each of our eight sites during the summer,” said Dorothy Skorupa, the recreation coordinator at Lincoln Parks and Recreation.

“Tennis instructors come to the sites and offer a one-hour class to our participants. At the end of the summer, we hold a tournament and each camp sends youth from two different age groups to compete,” she said. “We think it’s a great experience for the youth, and parents appreciate that their children are being introduced to the sport.”

Lynn Johnson, the Director of Lincoln Parks and Recreation said the expansive and integrative programs that Woods Tennis Center offers have a broader community impact.

“Improving Woods Park Tennis Center goes beyond the local community or those who will be playing tennis there,” Johnson said. “We, in Lincoln, have invested in building new venues and expanding facilities to bring sporting events to Lincoln. So this is one more great activity that makes Lincoln a tremendous destination.”

Kevin Heim said Woods tennis center only plans to continue growing and proving itself as one of Lincoln’s top sports facilities.

“This has been a once in a lifetime opportunity to grow tennis and build a new indoor facility that will serve generations for years to come,” said Heim.

“It has been refreshing having this opportunity to grow tennis and include people from every background. We’ve had people from ages 3 to 92 learning to play tennis for the first time and people from so many different socio-economic positions. Our staff understands this opportunity and we are excited to be able to continue offering tennis opportunities from entry level to high performance.”

Editor’s Note: Maggy Lehmicke was the captain of the Husker Girls Tennis team and graduated in 2016 from the University of Nebraska Lincoln