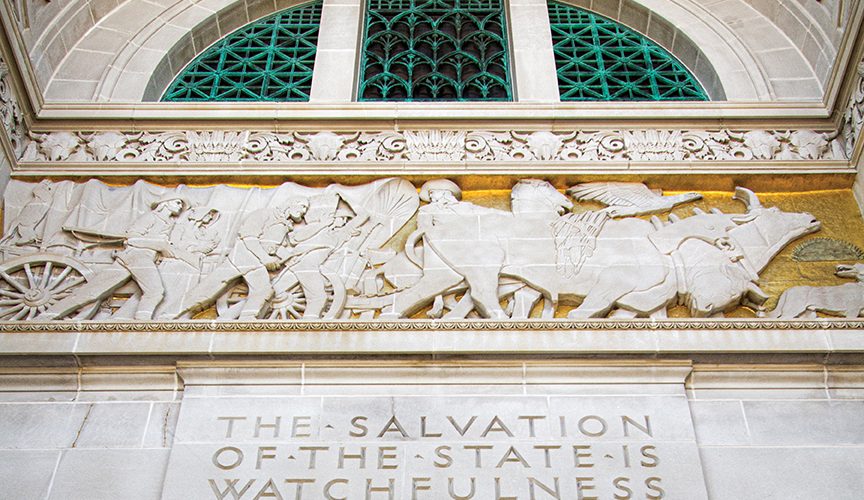 The first in the nation to incorporate a functional tower in its design. Within the building, a complex medley of design offers a stunning stroll through artful symbolism and history. The Capitol is also a lively workplace, housing the executive and judicial offices of the state, as well as the chamber for Nebraska’s unique unicameral legislature. Designed by New York architect Bertram Grosvenor Goodhue in 1920, building began in 1922 and ended a decade later. The Capitol was built with massive blocks of Indiana limestone, and the names of Nebraska’s 93 counties are inscribed around the base.

But what is most memorable about Nebraska’s iconic Capitol is that it’s visible from 20 miles away and defines the skyline of the Star City. At the top of this Tower on the Plains, above a gold-tiled dome banded with azure, the massive Sower extends his hand to sow seed from his canvas bag.

The interior corridor of the building is comprised of three monumental rooms—the Vestibule, Great Hall and Rotunda—throughout which decorative elements appear in sequence. The domed Vestibule introduces a gifts of nature theme through mosaics of flora and fauna with the sun as a central motif. The largest in the Capitol, four 25-foot columns of red Verona marble support the vaulting, topped by bull motifs.

A 10-foot statue of Ponca Chief Standing Bear on Centennial Mall just north of the Capitol between Q and P streets recognizes his contribution to Native demands for equality before the law. The statue bears Standing Bear’s famous statement made during the landmark trial that ended with recognition that Natives are people by law and therefore entitled to its full protection. “That hand is not the color of yours,” he said before the court. “But if you pierce it, I shall feel pain. If you pierce your hand, you also feel pain. The blood that will flow from mine will be the same color as yours. I am a man. The same God made us both.”

European Americans appear in gilded relief depicting the Spirit of the Pioneers. Inscribed below these figures is the core idea behind the one-house Legislature. “The salvation of the state is the watchfulness of the citizen” underscores the civic responsibility of Nebraskans to work toward a more noble life. Citizen engagement—the “second house” of the unicameral, the voice of the people—is directly reflected in these words.

If you’re a teacher or a student, an educational curriculum is available on the Capital website. The curriculum includes a thematic program developed for the Nebraska State Capitol by University of Nebraska Professor of Philosophy Hartley Burr Alexander and can adapted to supplement almost any curriculum which covers Nebraska History and Government, Western Civilization, Art and Art History. Visit capitol.nebraska.gov/curriculum/ for more information.

The Nebraska State Capital is also host to a number of events annually, both public and government. If you’d like to host an event at the Capitol (weddings, capitol displays or rallies and news conferences) visit capitol.nebraska.gov/building/host-an-event/ for more information.

A top destination for everyone interested in art, architecture and local history the Nebraska State Capitol is a fine place to spend an hour or two.

Guided Tours are available and begin at the North Entrance Second Floor Monday – Friday 9 a.m. to 4 p.m. except at noon; Saturday/Holidays 10 a.m. to 4:00 p.m. except at noon; Sunday 1 – 4 p.m. You can call the Tour Office at (402) 471-0448 for more information. Visit capitol.nebraska.gov for more information on the history of the building and construction projects, directions and update news.