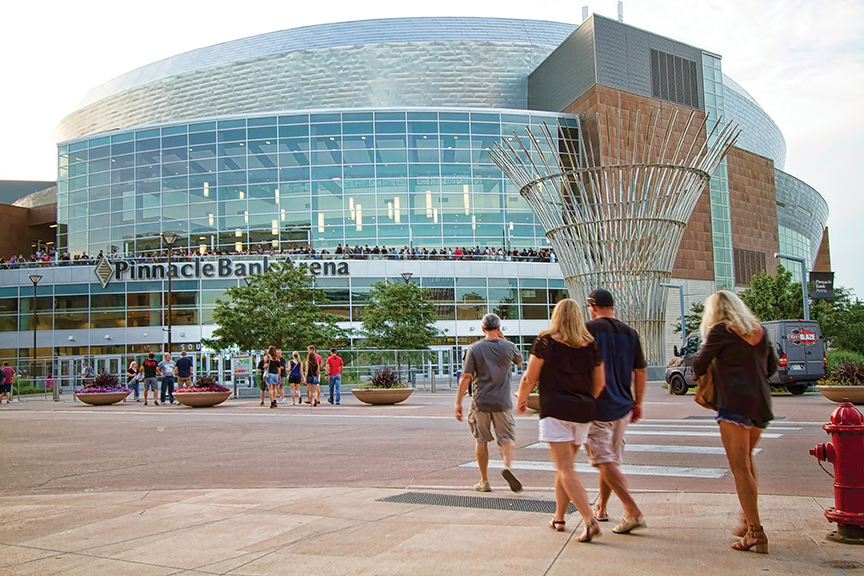 The Pinnacle Bank Arena’s silvery finish and circular shape may make it look, from a distance, at least, as if a gigantic space ship has magically landed in downtown Lincoln.

The magic is real, but it’s not extraterrestrial. Instead, it’s the result of vision, cooperation, commitment and hard work from the Lincoln community and its leaders. The big-name concerts, the basketball games and tournaments and the other major events held within its shimmery walls bring magic to more than 750,000 people a year.

Michael Bublé kicked things off with a sold-out show— “not just a concert but a show,” said Tom Lorenz, general manager of the arena. Bublé was followed by the likes of Elton John, Bon Jovi, the Eagles, Jason Aldean, Pink and Jay-Z—a series of 10 shows in 80 days.

Since then, artists like Paul McCartney, Kendrick Lamar, Katy Perry and Billy Joel have packed the house as the arena has offered 12 or 13 shows each year. And the crowds keep coming, pushing Pinnacle Bank Arena to the top tier in national rankings of arena venues. “Lincoln wasn’t a ‘must stop’ for concert tours in the past,” Lorenz said. “It is now.”

Mayor Chris Beutler said he is glad that the arena offers “something for everyone, presenting the top artists and events in so many categories and genres.” And, on a personal note, he never dreamed he’d get to meet one of the Beatles. “Paul McCartney not only gave us one of the best concerts at the arena to date, but he’s also a very nice man,” Beutler said.

Furthermore, the local chapter of the International Association of Theatrical and Stage Employees (IATSE 151) is easy to work with and supremely professional, Lorenz said. “Word gets around among the agents, entertainers and production crews,” he said.

The positive feeling is mutual. The arena has given a major boost to the area, said Jeff Cunningham, director of the Lincoln Haymarket Development Corporation, increasing traffic to the Haymarket and supporting more and more restaurants, bars, hotels and shops.

Mayor Beutler said the arena and other West Haymarket projects “have brought even more people into downtown,” helping to enhance the city from the Haymarket on the west all the way through the traditional city core and Antelope Valley to the new Telegraph District on the east.

They come not only from Lincoln but also from a wide radius around the city, Lorenz said: from Omaha, from western Nebraska and surrounding states.

Of course, something as big and magical as a 16,000-seat auditorium doesn’t just drop from the sky.

DLR Group of Lincoln’s design offers “an iconic look with mass and size,” Lorenz said. “But it’s not overwhelming at the street level” where a masonry face blends with the rest of the Haymarket. The next levels up are bronze steel panels, then precast concrete, and the silvery top is zinc.

At the center of the courtyard in front of the building is a shimmering metal sculpture called “Harvest,” whose shape and sparkle Lorenz described as complementing the building itself. On the lobby wall facing the doors is a gigantic “Candy Box,” which gives a nod to the candy factory that was one of the vintage businesses in the Haymarket.

The city also added a 2 percent tax at bars and restaurants, dedicated to the arena project. Revenue generated by tickets, concessions, rent and parking in the adjacent garages is also subject to the turn-back tax. And Pinnacle Bank ponied up $11.25 million for a 25-year claim to the arena’s name.

The project’s leaders promised the people of Lincoln the arena would be done on time and under budget, and it was. They also promised that the arena and the accompanying expansion of the Haymarket would generate millions in private investment. That promise has also been fulfilled, Lorenz said.

WRK Real Estate of Lincoln and Chief Industries of Grand Island made up the bulk of the initial investment, but since then three new hotels, a bunch of condos, office buildings for Olsson Associates and HUDL plus a lot of remodeling of the original Haymarket buildings have more than surpassed the $70 million expected.

“For any city to have that much development in its core is a great opportunity,” Lorenz said. And there’s more in the works.