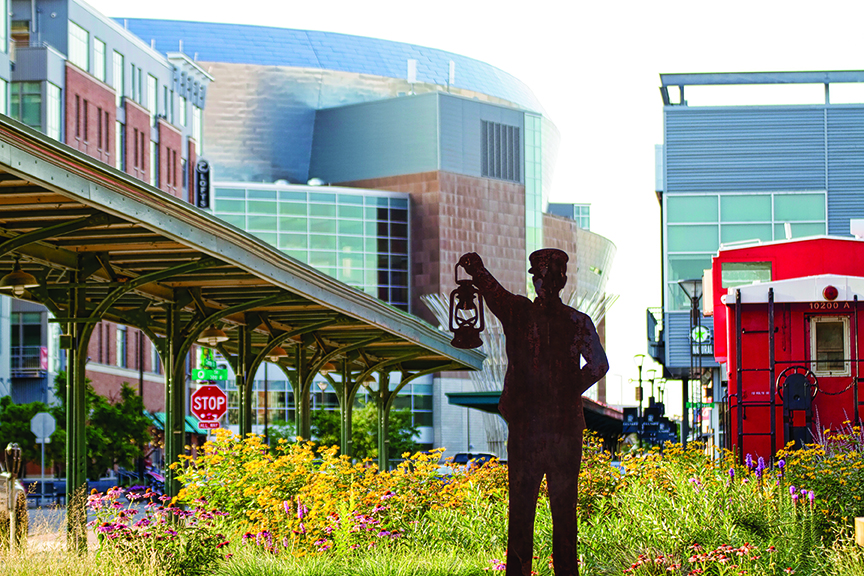 Like a healthy plant, reaching out to enhance a larger and larger area, Lincoln’s  downtown continues to grow. Thanks to ongoing renovations and new construction, the “downtown” now starts at the Haymarket on the west and runs all the way to the new Telegraph District on the east.

“Everything has come together nicely,” said Jeff Cunningham, director of the Lincoln Haymarket Development Corporation. “It’s a flow” from east to west with retail, businesses, housing and entertainment options all close to each other.

Like so many other cities, Lincoln saw its original downtown wilt as retail and entertainment businesses moved to outlying areas. But that movement began to reverse several decades ago, and now the greater downtown area is thriving.

Within the general bounds of the original downtown blocks, things are booming, said Todd Ogden, deputy director of the Downtown Lincoln Association.

A 38-room Kindler hotel is coming at 11th and P streets, adding three stories to the existing four-story building. A block to the east, a former three-story office building is getting taller by two stories and being transformed into apartments.

At Ninth and O Streets, a project resulting in two more hotels and some condos is underway. And at 10th and P, downtown’s largest-ever residential project will replace the former headquarters of the Lincoln Journal Star. The new building includes retail on the street level, offices on the next several floors and more than 200 moderately priced apartments on the upper floors.

Ogden said downtown is home to three general demographics: UNL students, young professionals and “empty nesters,” people whose kids are grown and out of the house. The demand for housing—and the supply to meet the demand—have skyrocketed in the past six or seven years, Ogden said.

Follow P Street west through the downtown core to the Haymarket, and the emphasis is on fun. Anchored by the Pinnacle Bank Arena, the Haymarket is full of restaurants, bars and coffee shops, boutique shops and galleries and The Railyard, Nebraska’s first entertainment district.

Less than 10 years ago, railroad tracks ran through the district, which now includes almost two dozen businesses, more than half of which offer food and beverages. The area features a huge outdoor screen that showcases free movies during the summer months as well as special events like Husker games and the World Cup soccer finals. The viewing area is flooded to become a skating rink in winter.

Just south down Canopy Street from the Railyard is more evidence of Lincoln’s growing economy. Olsson Associates, an engineering firm, built its new three-story headquarters there in 2014. And right across the street is Hudl’s new seven-story headquarters, completed just last year. Both buildings have retail and restaurant spaces on the street level.

Hudl, whose business provides “tools for coaches and athletes to review game footage and improve team play,” was founded in 2006 by three graduates of the University of Nebraska-Lincoln’s Raikes School of Computer Science.

“Hudl’s home has always been in Lincoln’s Haymarket,” said Jeffrey Daake, construction manager for the firm, “even in the early years.” Having outgrown its rented space, the company decided to move its more than 200 Lincoln-based employees into a new, larger space that the company can continue to grow into, he said, “all while being situated in the most vibrant part of Lincoln.”

And the benefits to Hudl are also benefits to the Haymarket, Daake said. “We are adding jobs to the area that didn’t exist a few years ago.” Some employees live near their workplace. And most all employees take full advantage of all the nearby options for food, drink and entertainment.

Cunningham said the Olsson and Hudl buildings help solidify the Haymarket’s identity as a “mixed use area. Lots of people now call the Haymarket their home” for work or actual residence. People shop, work and live in the vibrant area, he said. “There’s always stuff to do here and easy access to whatever you want.”

One big addition that’s made the Haymarket more livable is a grocery store at Canopy and N Streets in the South Haymarket area. With its opening planned for 2018, it will offer meat, a deli and produce, making downtown living even more appealing. The grocery will be in the Lumberworks complex, three buildings that will also include apartments and retail space and will wrap around an existing parking garage, making the space accessible to people walking or driving.

Despite the new additions, it’s the historic nature of the Haymarket buildings—former warehouses and small factories—that continues to be its biggest draw, Cunningham said. “People all over the country tend to be interested in historic districts that have been restored.”

About 20 blocks to the east of the Haymarket, another nine historic buildings are being restored—and 14 new ones added. Private developers are remaking the area at 21st and N Streets into a mixture of commercial developments and residential spaces in what has become known as the Telegraph District.

Nelnet has moved about 600 employees into the old Windstream building—originally Lincoln Telephone and Telegraph. And Allo Communications is remodeling a three-story LT&T garage across the street to use as its headquarters.

The next phase of development in the area will remake the former Fisher Foods industrial campus into 60 apartments and some retail spaces and other amenities. A brand new building nearby will provide 46 more apartments.

And to help people get from one end of downtown—and beyond—to the other, the city has expanded its bike trails to include an N Street bikeway with a protected lane for cyclists. Ogden of the DLA said Lincoln’s already strong bike culture continues to grow stronger. Lots of talented young people are moving to town, he said, and they expect to be able to use their bikes to get around.

Now even those who haven’t ridden their bikes to downtown will be able to cycle from place to place thanks to the new bike share plan called BikeLNK. Between 15 and 18 stations will be located on the university’s City and East campuses, in the Telegraph District, through the core of downtown and in the Haymarket. People will be able to use a cell phone app to find a bike and rent it.

Using the old to best advantage and adding the new to continue to grow, Lincoln’s downtown is a neighborhood with a 24/7 atmosphere, Ogden said, a place where people can “work and live and have fun.”