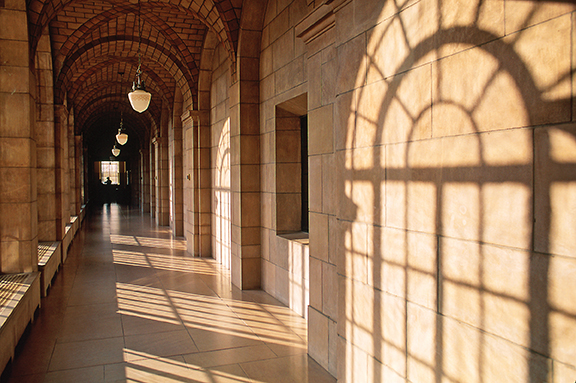 The Salvation of the State is Watchfulness in the Citizen.
—Hartley Burr Alexander

Rising high on the Nebraska plains is the architectural centerpiece of Lincoln—the Nebraska State Capitol.

The capitol overlooks Centennial Mall, which extends north to the State Historical Society and the University of Nebraska-Lincoln. The mall is being renovated and will be completed by Nebraska’s 150th anniversary celebration in summer 2017.

The Nebraska State Capitol’s history began with the legislature and is the design of New York architect Bertram Goodhue. The present capitol, the third to be on this site, is a departure from the modest brick buildings that preceded it. Contributing to the design were Lee Lawrie, sculptor; Hildreth Meiers, tile and mosaic designer; and Harley B. Alexander, consultant for inscriptions and symbolism.

The capitol building, with its Indiana limestone exterior and 400-foot tower, sits at 1445 K Street and dominates downtown Lincoln. Often referred to as the Tower of the Plains, it is visible to travelers from 30 miles away.

The capitol’s tower sits on a square base, which is 427 feet on each side and three stories tall. The floor plan is a cross within a square and the rotunda, 112 feet tall, is at the intersection of the cross in the center of the building. The center rises to the 400-foot tower. According to The Nebraska State Capitol by Eric Scott McCready, Nebraska’s capitol is the first example of a state capitol having a tower with usable space as its major architectural feature.

The Sower, a 19-foot tall bronze statue, graces the top of the tower. Lee Lawrie, one of America’s most well-known sculptors, created The Sower, which represents Nebraska’s agricultural heritage.

Pioneer life and law are the two themes portrayed in the
sculptures. The Spirit of the Pioneers and Buffalo decorate
the north entrance, while the south entrance features the figures of Akhnaton, Solon, Solomon and Julius Caesar. Other exterior carvings depict events in the 3000-year evolution of democracy.

The interior’s marble-columned chambers have vaulted tile ceilings covered in polychrome tiles. The marble mosaic floors and murals reflect the history of the pioneers and Native Americans in Nebraska.

Virtues of the State is the theme of the rotunda. The theme is depicted in marble mosaics. The center mosaic is Earth as a Life-Giver, created with Italian marble surrounded by symbols of water, fire, air and soil. Scientifically accurate Prehistoric Life of Nebraska borders the elements. Vividly-colored winged figures in the dome represent temperance, courage, justice, wisdom, magnanimity, faith, hope and charily.

Hildreth Meire designed the intricate mosaics and according to the International Hildreth Meiere Association, she was “One of the most influential and creative decorative artists of the twentieth century whose achievements gained the recognition of the established art world.” The Nebraska State Capitol was one of her first major commissions.

The Memorial Chamber, the central room of the 14th floor observation level, is dedicated to “Heroism called for in the public service and in devotion to humanity.” The chamber’s extensive black marble, the “evening sky” dome and the “evening star” chandelier are traditional in design.

But the chamber adopted a modern look when eight murals depicting heroic enterprises in Nebraska history were added in 1996. Artist Stephen Roberts painted the murals that portray military and civic workers who keep citizens safe from poverty, disease and fire, and those who protect our civil rights, freedom and peace.

Full of symbolism, the interior of the capitol awes its visitors with its colorful array of mosaics, murals, tiled domes and columns.

But that doesn’t mean the Capitol isn’t relevant and a hub of activity. As the center of the Nebraska State Government, it houses the laws and lawmakers who guide our everyday lives.

Nebraska’s unicameral legislature assembles in the west chamber, named George W. Norris Chamber after the founder of the unicameral in Nebraska. The history of Nebraska is depicted from the European age of settlement to the arrival of the cattlemen and homesteaders. They are represented in the walnut ceiling beams. Multi-colored marble columns reflect Nebraska’s multi-cultural heritage. Visitors can view the legislative sessions from the third floor west balconies.

Senator Kathy Campbell said working in the capitol gives her a sense of the history of the state and of the unicameral.

“I make it a point as I enter the legislative chamber to appreciate not only the room but what a privilege it is to work in this room.

Even though she works in the capitol every day the legislature is in session, she said, “I never enter the building with having a sense of awe of what it means as the seat of government.”

The Supreme Court meets in an acoustically perfect chamber made of American walnut. Eight thousand carved walnut pieces make up the ceiling. Solid walnut wainscoting, railing and attorney’s table and chairs furnish the chamber. Three tapestries represent the settlement of the Louisiana Territory. The paneled wall behind the justices’ bench quotes Heraclitus: “Eyes and ears are poor witnesses when the soul is barbarous.”

To Nebraskans, the capitol is not just the center of government, but it is a museum, a landmark and a towering presence in the life of the city.

Jamison Wyatt, legislative aide and former tour guide, is well acquainted with the capitol. His first memory of the capitol was a visit when he was 5 years old. “I was fascinated with it at first because it was a very tall building.”

Wyatt said it’s not just a gorgeous building. “Everything is interconnected.” Wyatt said the sculptures, murals and mosaics tell a story.

“It’s like a grand pop-up book assembled with stone, mosaic and murals. Every artistic expression forms a connection and story. The story is of humankind and how past experiences and understandings form a society on the earth we call home.” The tower serves as exclamation point on the story, he said.

After seeing the story of Nebraska evolve, visitors can take the elevator to 14th floor observation decks for a panoramic view of the city.

A recent visitor said, “The capitol building in Lincoln is treat for the eyes from the outside and the inside.”

The public is welcome to attend the Supreme Court’s sessions as well as legislative sessions.

For an online tour of the Nebraska State Capitol, visit http://capitol.nebraska.gov.

Explore the capitol in person; plan a visit at http://capitol.nebraska.gov/visit. Free tours are available on the hour (except noon).

The capitol is open 7 days a week.