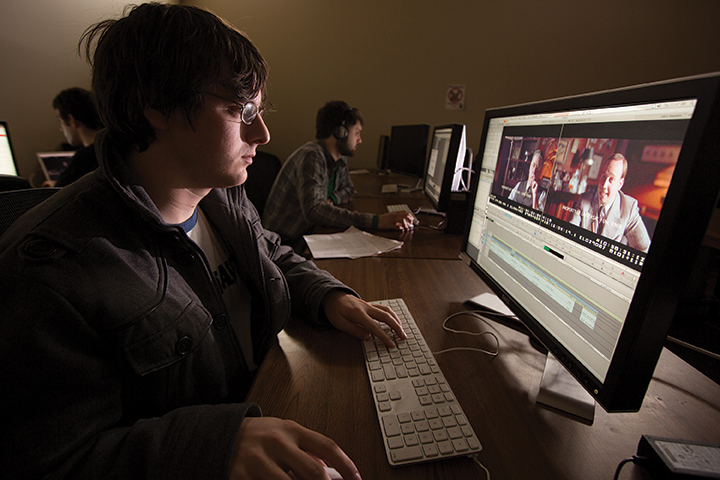 When you think of innovation in film, game design, theatre or the internet, Lincoln, Nebraska, may not readily pop into your mind today. However, with the creation of the University of Nebraska–Lincoln’s Johnny Carson Center for Emerging Media Arts, one day soon it will.

One of Nebraska’s favorite sons, Johnny Carson, was at the vanguard of the emerging media of his day. When he graduated from the University of Nebraska–Lincoln in 1949, television was in its infancy, but since his education trained him to embrace change and take advantage of the new technology, he has gone down in history as one of the pioneers of television comedy. Carson valued the preparation UNL gave him and through the Johnny Carson Foundation has consistently made resources available for students to get the training they need to become successful within an ever-changing media environment.

“Students studying in the Johnny Carson School of Theatre & Film have a saying: Honor the Name. Honor Johnny’s name—challenge yourself, go out in the world and create something new, be the best, do it with class and style and hard work,” said Hixson-Lied College of Fine and Performing Arts Endowed Dean Charles O’Connor. The Johnny Carson Center for Emerging Media Arts will do just that.

Scheduled to open in the Fall of 2018, the Johnny Carson Center for Emerging Media Arts is a $57 million investment by the University, made possible by a $20 million investment by the Johnny Carson Foundation. This interdisciplinary center will be an internationally distinct program in film and emerging media that explores the boundaries of where cinematic narrative and storytelling intersects with science, the humanities, computer science, engineering, music, fine arts and other disciplines.

“Johnny Carson believed in a very powerful vision of how well-conceived philanthropy can transform a university through investments in facilities and endowments,” O’Connor said. “He knew that the future of our state is tied to the future of our University and that the arts play a powerful part in that future. Now, because of Johnny’s legacy, our college is about to embark on perhaps the most significant and transformational period in its history.”

One of the key components of this training will be in virtual production. It is a field of study that is still being defined but is playing an increasingly crucial role in both traditional visual storytelling by altering the way films are created and the development of how stories are told and visualized across an array of media platforms. Through the Johnny Carson Center, students will learn how to create virtual environments for electronic and mobile game environments and for visual effects and design for film and broadcast television.

Virtual production will also impact live theatrical production at the Carson School. Virtual sets and environments can be ‘composited’ with virtual actors. This allows the work to be distributed remotely among directors and designers who may network via information management systems. This also has the potential to carry live theatrical production to homes and theaters over the Internet. Virtual production will also allow students to explore virtual and augmented reality that can overlay live experience. Live production is becoming infused with media elements such as projected backdrops and animated characters interacting with live performers.

Once students complete a foundational curriculum they will select two certificate programs in virtual production which might include:

Performance for Film and Virtual Production

Performing Across the Spectrum of Virtual Production from Film Acting to Motion Capture for Control of Virtual Actors and Animated Characters.

The Johnny Carson Center for Emerging Media Arts will be located at the site of the former Nebraska Bookstore at 13th & Q streets on the southern edge of UNL’s city campus. The redesigned space is scheduled to open in Fall of 2019. The facility will include teaching and production sound stages, a performance capture lab, classrooms, design and editing labs, computer labs, a seminar and screening room and other specialized spaces.

Other aspects of this innovative venture include a director of the center along with seven permanent faculty members and staff members who specialize in media technology. In addition, a Board of Advisers will be formed, and additional faculty support will come from Carson Professors, who are professionals from the film and emerging media industry; Carson Fellows, who are UNL faculty from across various disciplines; and guest professionals and artists. A new curriculum is in the process of being built for a Bachelor of Fine Arts in Film and Emerging Media.

Carson Emerging Arts Conferences, an international conference for exchanging ideas and showcasing developments, which will be held every two or three years.

Although Lincoln is a long way from the center of the film industry, the Carson Center will put Lincoln at the heart of innovation and development in the industry as well as training leaders in the future of emerging media.