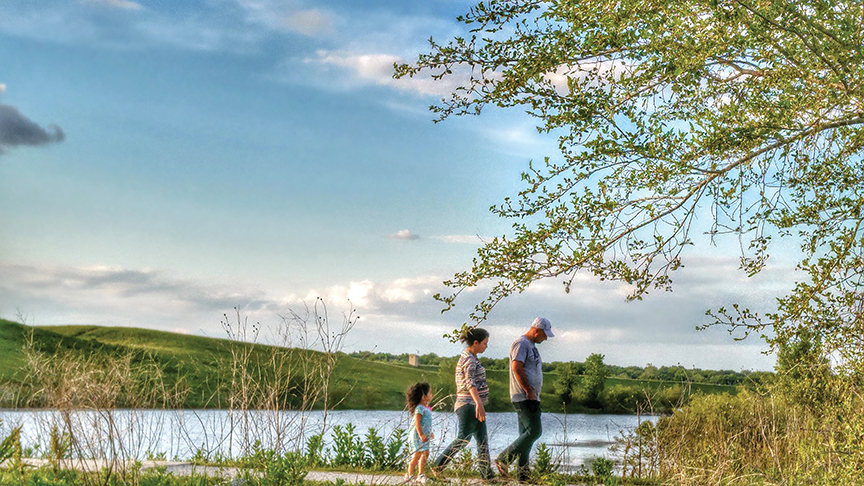 Lincoln is known for many things—Husker football, the University, people who are “Nebraska nice” and the State Capitol building—but among planning communities across the nation, it’s also known for another secret charm: its bike trail system.

Hailed as one of the the nation’s finest trail systems, Lincoln bike paths weave together like the conjoining spokes on a bike wheel with the center point convening downtown at Union Plaza – Lincoln’s only urban regional park.

Lincoln Parks and Recreation Park Planner Sara Hartzell, who primarily works on long range transportation plans, praises Lincoln’s trails system, saying that it does a good job of taking advantage of two key geographic features in Lincoln. First, the trails beautifully stretch along Lincoln’s waterways, providing a serene view for bikers and exposure to the often hidden streams. The trails also take advantage of the old, unused railroads. The railroads that have been reconfigured to double as trails help quadrant the city while the waterways give the trails their serene curves.

Lincoln’s trails system included over 131 miles of hard surface and rocky trail that meander through the many corners of our city with new projects being built every year.

“When the railroads closed, visionary people held onto those closed railroad quarters and they became trails,” said Johnson.

He says the Great Plains Trails Network is a major advocate for Lincoln’s trails and their — and other private groups — fundraising efforts have given a financial edge to Lincoln’s trails over other like cities.

“Part of the reason that Lincoln has such a great trails system is that we’ve been able to match private financial support with federal grants,” Johnson said. “We do that on an annual basis.”

While GPTN (Great Plains Trails Network) started as a small group of passionate bikers, the excitement electrified the community to start biking. Now, many bike shops, bike clubs and other advocacy groups thrive in Lincoln.

Hartzell says GPTN was one of the first groups in the country to come together with the purpose of focusing on trail development. The group started in the 1980s when there was a bond issue in a city election to expand the trials near the Children’s Zoo. From there, the group ballooned, inspiring more groups to advocate for trails.

Hartzell quotes Margaret Mead when discussing the success of our trails system, saying, “Never doubt that a small group of thoughtful, committed citizens can change the world. Indeed, it is the only thing that ever has.”

“When you have just a couple people that are passionate about something and don’t take no for an answer and don’t give up, I think that’s what makes the difference between success and fizzling away,” Hartzell said. “That’s what got (our trail system) going and once people realized how special it was to have this network, it really encouraged people to get interested in cycling when maybe they wouldn’t have been if they were in another town.”

“(The award winners) are all places that people have a picture in their head about, so it’s pretty amazing,” said Hartzell.

With a trails system as vibrant as ours, an equally colorful community had to follow. Which came first, the bikers or the trails? The ripple effect of the small group of trail pioneers excited planners to feed the trails system which, in turn, created more bikers. The community plans events such as the Taco Ride on Lincoln’s Wabash trails to the Nacho Ride which takes you out of Lincoln and riding to Eagle, Nebraska. Events like these, often involving food and drink, pop up frequently in a town with so many options for trails.

GPTN also sponsors orientation rides a couple times a month that allow residents the chance to get familiar to the trails system on a tour of the trails.

Johnson says they expect the trails system gets well over a million uses each year. They came to this striking conclusion after conducting a number of surveys that asked people to estimate how often they use the system. Lincoln Parks and Recreation assumed that most people would exaggerate their use of the trails, so even after rounding down, they found that on average, people estimate they use the trails 50 times a year, many even say they use it at least twice a week.

To keep up with the ever increasing amount of bikers in the area, along with building more mile of trail, Lincoln planners are set to build more protected bike lanes in the busier parts of Lincoln.

“We have a lot of really great trails, but in a lot of places, it’s hard to get from a neighborhood to a trail,” said Hartzell. “You have to go to an arterial road.”

It’s in these arterial roads that planners are looking toward the future in creating a safe place for bikers.

One of the newest additions to the system is the N street protected bike lane that connects the Jamaica North Trail at 7th and N street to Billy Wolff Trail at 22nd and N street with the haymarket area, making it easier for bikers to intersect the downtown area without using the streets. The N Street bikeway is creating the trend for more bike lanes that support commuters and is already an award winning design. “Prior to the N Street protected bike lane, there weren’t great access routes into and throughout downtown,” Johnson said. “This route accomplishes both things.”

The prospect for more protective bike lanes to come could help keep young businesses flocking toward Lincoln since, as it stands now, the trails system entices businesses to Lincoln. Hartzell says many start-ups claim the trails system was the cherry on top in choosing lincoln as a headquarters, creating Lincoln’s oft used nickname, “the Silicon Prairie.”

“Young, tech-oriented people, they want to get around on a bicycle,” said Hartzell. “This is an amenity you need to have in place in order to attract that young, talented demographic.”

Along with being an economic development tool, Hartzell says it’s also a great thing for public health and to get people outdoors.

“(The trails) get people out in their community and allow people to see their communities from the back,” she said. “When you’re going down the trails, you’re not seeing the streets from the fronts of building, you’re seeing backyards and forests and creeks. It really makes you realize that our city isn’t just street and storefront, there’s a whole lot more to it than that.”