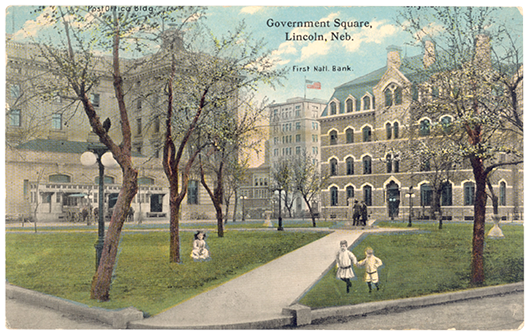 Lincoln in the early twentieth century was awakening from the deep depression of the mid-1890s, which saw the city’s population drop from 55,000 in 1890 to 39,000 in 1900. The former peak was not reached again until the 1920s, but construction of new downtown office buildings resumed in the first decade of the century, culminating in 1910 the First National Bank of Lincoln replaced its three-story home at the southeast corner of 10th & O Streets, built in1874.

Two young Chicago architects, Paul V. Hyland and Herbert H. Green, designed the new eight-story tower of steel and reinforced concrete, clad in buff brick and creamy terra cotta. It would have seemed a modest structure among Chicago’s pioneering skyscrapers, but in Lincoln the new First National Bank Building claimed the title of the city’s tallest office building from the six-story Burr Block at 12th & O Streets, built in 1887.

The partnership of Hyland & Green only lasted from 1910-1914, but Hyland’s impact on Lincoln was much larger than that single building. Prior to his 1910 Lincoln project, his known work consists of residences in and around Chicago and some one-story banks in Illinois and Wisconsin. It is unclear how the partnership landed the commission for the multi-story Lincoln office building. Some of his subsequent Lincoln clients had strong Chicago connections, but Hyland found more early success in Lincoln than in his hometown.

By 1913, the partners had also begun designs for a mansion for Frank Woods. Frank was not only another prominent attorney, but together with his brothers Mark and George, the Woods Bros. founded Lincoln Telephone & Telegraph Company and were leading entrepreneurs, especially in real estate development. They were Illinois natives and had substantial interests in Chicago as well as throughout Nebraska. The Italian Renaissance Revival mansion which Hyland designed for Frank and Nelle Cochrane Woods was not constructed until 1916. That year the Woods Bros. had opened the Woodscrest Subdivision, including a spacious two acre house lot for Frank and Nelle bounded on three sides by Lake Street, Sheridan Boulevard, and Woodscrest Boulevard.

It held the crown as Lincoln’s tallest office building for a decade, during which the Lincoln Chamber of Commerce reveled in the slogan “A New Skyline Every Morning.”

In 1916 Hyland also designed a unique mansion at 1801 C Street, just southeast of Downtown Lincoln, which still stands in splendid condition. The flat-roofed, stuccoed townhouse, described as a “studio residence,” was both home and design studio of James L. McAfee, an interior decorator, and his
wife Gertrude.

No only do all four of Hyland’s major Lincoln commissions between 1910 and 1916—First National Bank Building (now called Lincoln Building), the Frank & Nelle Woods Mansion, the Terminal Building, and the McAfee House—still stand, all four are listed on the National Register of Historic Places. The garden house, yard, and home of F. M. and Anna Hall have been designated as a Landmark by the City of Lincoln and their neighborhood is recognized as the Everett Landmark District.

Much of the rest of Hyland’s architectural work is found in handsome brick, stone, and terra cotta banking houses throughout Illinois and Iowa, along with some larger commercial and educational buildings in his native Chicago, including for Loyola University. But his architectural impact on Lincoln continued beyond 1916.

In 1918 Hyland and McArthur secured a commission in downtown Omaha for showroom and multi-story garage for Nebraska Buick Company (1901 Howard Street), and McArthur relocated to Omaha to oversee the project. McArthur commenced an independent architectural practice in Omaha and gained major commissions there, as well as in Lincoln. He completed another large showroom and storage garage for Nebraska Buick Company in downtown Lincoln at the southwest corner of 13th & Q Streets in 1918-21. The highly adaptable building with huge windows served as part-barracks, part-Western Electric factory during World War II. It was again adapted into shops and a public parking garage in the 1970s, then more recently has again been transformed with offices on the top floors of National Research Corporation, mid-floors of parking, and retail at ground level, with a lively painted color-scheme over its original light-toned brick and terra cotta.

For the third consecutive time, the Chicago connection of Hyland, Green, and McArthur had designed Lincoln’s tallest commercial office building. Sharp Building held the title not for six years, or ten, but for over a half-century, until it was finally eclipsed by a new, twenty-story, 220-foot-tall First National Bank Building (now U.S. Bank Building) across South 13th Street to the west in 1980. But perhaps that contest had been rendered moot by the 400-foot-tall Nebraska State Capitol, completed in 1932.