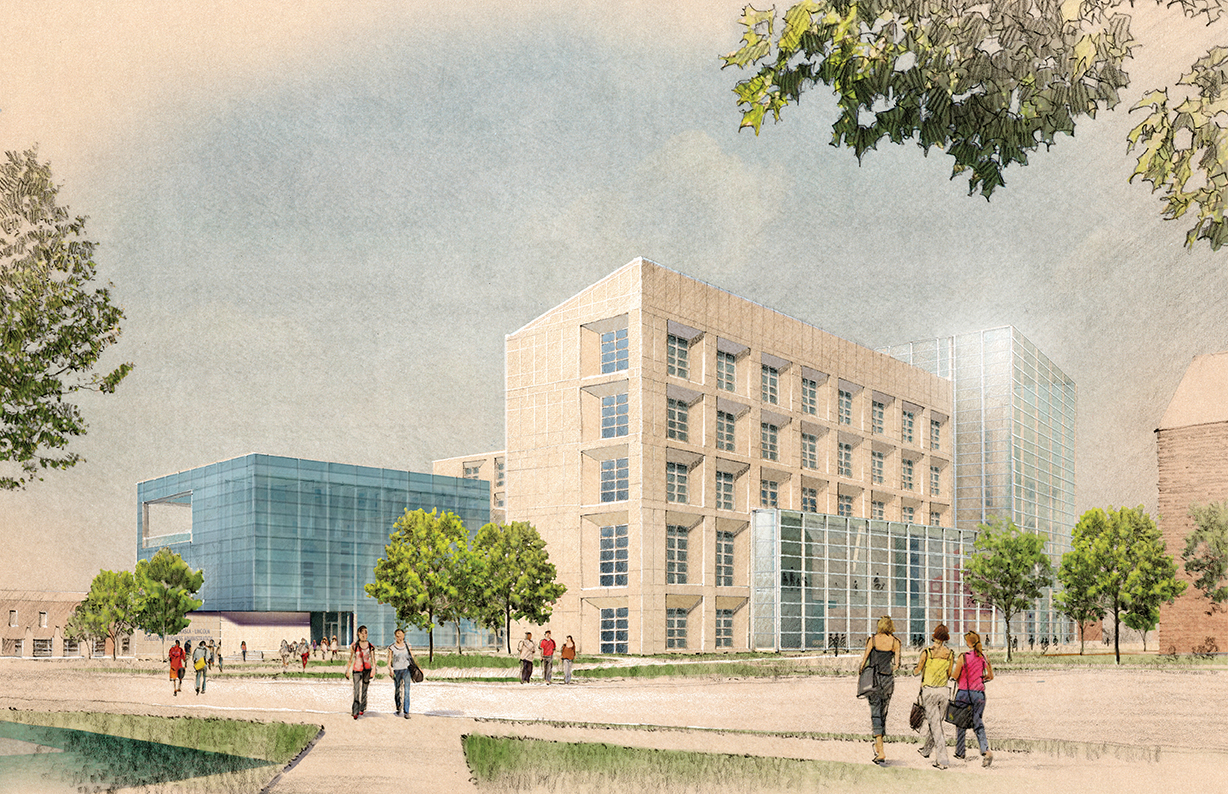 You can hear the excitement in Donde Plowman’s voice as she points out features in the model of the UNL College of Business Administration’s new home: the atrium, the auditoriums, the glass cube on the corner.

Plowman has been dean of the college since 2010, and her enthusiasm reflects the momentum she feels in her college. “It’s not just about the building,” she said. “It’s about a building for a world-class college of business.”

The 240,000-square foot building in question, under construction at 14th and Vine on the University of Nebraska-Lincoln campus, is just a reflection of what CBA is becoming, Plowman said. “The building doesn’t make you a college, but you can’t be a college without an appropriate building.”

Just months after arriving on campus, Plowman appointed a faculty task force to look at CBA’s current facility, built in 1916 and enlarged in 1993, compare it to business colleges at other Big Ten schools and make recommendations. The proposal the task force came up with became the basis for the architects’ work, she said.

Plans are that the building will be ready in fall 2017 to welcome a steadily growing enrollment—up from about 3,000 majors in 2011 to nearly 4,000 majors and 1,300 minors in 2015-2016. Plowman said the growth is a result of recruiting students who appreciate a Big Ten university’s high standards—and who love being part of the business program from the beginning of their college careers.

Many Big Ten schools don’t admit business majors until they are juniors, Plowman said. “We start them as freshmen.”

She said CBA’s new Honors Academy, founded in 2013, has also helped attract “the best and the brightest.” The Honors Academy admits 45 freshmen each year from among nearly 200 applicants, but 80 percent of those who applied come to UNL even if they are not admitted to the academy, she said.

Rik Barrera, the college’s chief operating officer, said in addition to beefing up its recruiting, CBA has also strengthened its academic program and expanded both career services and advising. “We put a big focus on the undergrad experience,” he said. “Students are excited to be part of CBA from day one.”

But it’s been hard to fit the growing student body into the original CBA building, half the size of the one under construction. Besides the limited square footage, the current building contains a majority of classrooms that seat 25 students or fewer. “We don’t teach any classes that small,” Plowman said. Only five current classrooms can accommodate classes of 40 or more.

That won’t be the case in the new building, designed by Robert A.M. Stern Architects of New York in partnership with Alley Poyner and Macchietto of Omaha. The architects’ challenge was to design a building with a relatively small footprint but keep it all in five floors or fewer, Barrera said.

As a result, the building includes a huge atrium, but that space starts on the second floor and soars to the fifth. Classrooms occupy the space under the atrium on the ground floor. The atrium will offer students plenty of  “places to hang out,” Plowman said, and will be easily configured for speakers and other events, too.

Other features of the building that Plowman and the CBA faculty are excited about include:

The northwest corner of the building will be a cube primarily made of glass that will help define the main entrance and will include administrative offices as well as a board room for use by the college’s 13 advisory boards.

The focus of the building, Plowman said, “is to try to increase the sense of community, the sense of belonging. I dream about this building being lit up at night because the community will be using it so much.”

She said she hopes the Lincoln Chamber of Commerce and similar organizations will host events at the new building and that alumni will take advantage of some of the smaller spaces to host meetings and events, too.

“The building has utility and value for the community as well as the students,” she said.

The community and the college’s alumni have made the $84 million building possible, Plowman and Barrera said. Howard and Rhonda Hawks took the first big step, Plowman said, making an eight-figure gift soon after the Board of Regents approved the concept for the building in September 2012.

Since then, the college has received 26 gifts that make up more than $60 million, but a total of 1,200 individuals have contributed at various levels. All the donors’ names will be listed in the building, and some spaces will be named for the larger donors: the career services office for Nelnet and Union Bank, the finance lab for TD Ameritrade, for example.

In a video on the college’s website, Tonn Ostergard, CEO of Crete Carrier Corporation and chair of the college’s capital campaign committee, said his loyalty to UNL inspired him to support the new building. He said he and other alumni are grateful for what they learned at UNL and want to give back to the university for the good start it gave them.

Alumnus Shawntell Kroese, assistant president of Union Pacific, noted that there are many worthy causes to which to donate. “For me,” she said, “It’s about putting my money in places where it’s going to make a difference. I see the commitment the university has to excellence, and I want to give my time. I want to give my money.”

Plowman said she thinks of the new building as “built by alumni for future alumni,” today’s students. She’s proud that, while 67 percent of the college’s students are from Nebraska, 75 percent of its graduates take jobs in Nebraska. “That’s good for our economy,” she said.

She believes UNL’s high-quality business college will continue to be an asset for the state. And she is sure the high-quality building they’ll move into in 2017 will make it all the more obvious. She doesn’t expect students or faculty to come to UNL for the building, but she said, “It will give them a good idea where we’re headed.”