Experience Our Most Beautiful Building

“Wow, I didn’t expect this,” is one of the many comments heard almost daily by the tour staff at the Nebraska State Capitol. Every day, except Thanksgiving and the Friday after, Christmas Day and New Year’s Day, the Capitol is open to visitors. Free, guided tours are available on the hour, except at noon, in one of the most beautiful buildings in the world. At least that’s how many visitors, from all over the world, have described the building. A visitor from India once commented that our Capitol was more beautiful than the Taj Mahal. A couple from France was advised by friends if they ever got to the United States they should see Nebraska’s Capitol. 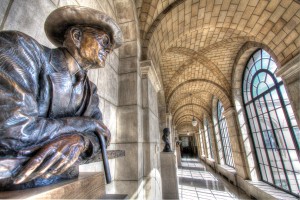 Those who come to see Nebraska’s Capitol as part of their grand capitol tour are at a loss to identify a more beautiful building. Many will comment that some other capitol was bigger or taller or older, but all agree that few, if any, are more impressive. Visitors are awestruck as they enter the main north door on second floor, uncertain where to look first. Sometimes the first of a visiting group to enter will stop in their tracks, causing a visitor traffic jam at the entrance. School age children are much more vocal than most visitors. “Wow, this is awesome,” is a standard student response upon entering. Toddlers test their legs walking unhindered by carpet and furniture. As impressed as visitors are at first glance, it is usually after taking the guided tour that the grandeur and full impact of the Capitol sinks in. Visitors are amazed the building was paid for as it was built. Many will touch the large red vestibule columns once they learn they are 15 tons of solid Italian marble, and students spread their arms to embrace the smooth stone. The tour guides point out features casual observers miss and explain in detail the murals that tell Nebraska’s story. Frequently guides will hear, “It’s amazing all the detail and thought that went into the design.” The best reward the guides can have is to hear a visitor sing our Capitol’s praises, reinforcing what all Nebraskans know.

New York architect Bertram Grosvenor Goodhue designed a monumental capitol with something for everyone. Nebraskans see the Capitol as a symbol of the state and seat of government. Fans of architecture are dazzled by the mixture of classical  forms; gothic, Romanesque, Egyptian, English and Spanish styles are blended together in a modern skyscraper building. Art lovers are surrounded by sculpture, mosaics and oil paintings reflecting many different artistic styles and influences. History buffs find stories of Nebraska’s past from the ancient societies influencing western civilization to the Native Americans to the pioneers who built our agricultural state. Geologists can find over 40 different kinds of stone. Political junkies learn about the nation’s only unicameral legislature and see all three branches of government together in one building. Children find a big building with wonderful echoes and dinosaurs beneath their feet. Everyone enjoys the sweeping views of Lincoln offered from the observation deck on the 14th floor.

During its 1922-32 construction, the Nebraska Capitol was featured in publications across the nation and around the world. The building was seen as an architectural wonder then and it now stands as a tribute to the talents of the architect Goodhue. Assisted by University of Nebraska Philosophy Professor Hartley Burr Alexander, artists Lee Lawrie and Hildreth Meiere decorated Goodhue’s building with images of nature and society. It is Alexander’s thematic program, most visible on the interior that encourages us to work toward noble life.

So Many Things to See Inside and Out

Upon approach, visitors are struck by the capitol’s unique design. Occasionally a visitor will question if it is, in fact, the Capitol. Sitting on a four square block site, the broad flat base is over 400 feet on each side architecturally expressing the expansive sweep of the prairie. The 400 foot office tower rises up from the center. Above the golden dome, Lee Lawrie’s bronze Sower spreads noble life via agriculture. The Native American thunderbirds beneath the golden dome symbolize the rain which keeps Nebraska’s agriculture productive. While many daytime visitors never take the time to walk around the building on the sidewalk or promenade, it can be a pleasant stroll in the evening and provides visitors with a unique experience in Lincoln. Visitors and residents enjoy walking around the building’s sidewalks admiring the changing light and shadow that play on the faceted upper reaches and golden dome of the office tower. Updated during construction to reflect the latest trend—Art Deco—the tower is a dominant feature of the downtown skyline and visitors often identify it as the Art Deco Capitol.

Climbing the grand north staircase, visitors find the promenade a tranquil place to view the grounds and city beyond. Above the county names circling the building, Lawrie’s relief sculpture represents the evolution of Western civilization and government. Visitors usually recognize some of these significant events in the development of law. On the west side Moses and Solomon are familiar figures of ancient Hebrew law. The Greeks and Romans occupy the remaining relief on the west side. The three panels above the Supreme Court represent the legal foundations of American government, the Declaration of Independence, the Magna Carta and the Writing of the Constitution. Visitors correctly identify the Governor’s Residence to the south with its extensive landscape. The residence’s grounds have been expertly landscaped to showcase the Georgian Revival home and one of the citywide Tour de Lincoln bike sculptures adds a bit of whimsy on the northwest lawn. Moving to the east, events from the new world continue the sculptural history lesson. Scenes of the Mayflower Compact and Emancipation Proclamation are followed by the Louisiana Purchase. Nebraska’s Statehood ends the circuit on the northeast corner. Watching the sun set from the north entrance reminds visitors they are in a flat prairie state.

After their Capitol experience, most visitors will say, “This is a spectacular building. Nebraskans are very lucky to have it.” For information about this amazing Capitol and the tour schedule visit www.capitol.org.