Summer Music Echoes Across the City

There’s nothing like live music in the summer, and Lincoln has a phenomenal selection of summer music festivals. Local and international artists; classical, rock, blues, jazz or country; in a majestic church or outside on the grass, we have them all. Some of these festivals are only 10 years old and some more than 100. It’s a musical summer in Lincoln.

The Lincoln Community Foundation Gardens at 1415 N Street are a charming oasis in downtown Lincoln. They are even lovelier each Wednesday at noon, from late May through August when free concerts are held. A variety of local bands set up under the gazebo to entertain music lovers as they enjoy lunch or munch on popcorn or ice cream from the nearby snack stand.

Bands vary from year to year, but the eclectic mix always includes a little blues, a little country, some classic rock or adult contemporary, and everything in between.

Stay up to date on the Downtown Performance Series by liking the event on Facebook.

One of the capital city’s biggest events, Celebrate Lincoln, is a cultural festival that combines music and dance with ethnic foods, unique merchandise and fun activities for kids.

Staged in late May/early June on N Street between 12th and 14th,  the festival brings in both national and local acts on a flatbed stage. Gate fee is $7 for adults and $3 for children—but you can get in for free if you stop by during lunch. 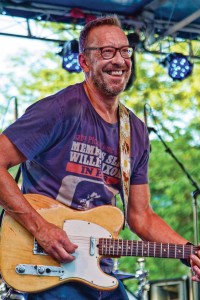 Jazz lovers look forward to the month of June, when free concerts are staged on the lawn of the Sheldon Museum of Art. National and international artists perform.

This very popular event is sponsored by the Sheldon Museum of Art, the University of Nebraska-Lincoln, University Program Council, and other benefactors. Jazz in June is a wonderful way to indulge your love of all things jazz… or to experience it for the first time. Come early to shop the farmer’s market and other local vendors, then spread your blanket or set up your lawn chairs for an evening of great music.

Find out who’s playing in 2014 at JazzInJune.com.

Children under 16 are always free, and a subsidized ticket program means most families can attend without overshooting their budgets. The talented, international musicians who are invited to play the festival also perform free at schools and cultural centers, and they teach Master Classes for high school students at the Sheldon Museum of Art.

The Lincoln Municipal Band sets up in the Shildneck Memorial Bandshell in the heart of Antelope Park for a series of seven free concerts each summer, just as they have since 1907. Thousands of locals pack their picnics and lawn chairs every Sunday through July and August for a fun, free concert.

Learn more about this series and the band at artsincorporated.org.

For five days each autumn, Lincolnites enjoy a five day, homegrown music festival. Launched by Jeremy Buckley when he was just a college student with a love for live music, Lincoln Calling now features more than 100 bands and deejays and 10 different venues in downtown Lincoln.

Nationally renowned acts and local groups are always in the line-up, and the venues are a mix between time-honored stages like the Zoo Bar, Duffy’s Tavern and Yia Yia’s, and open-air settings such as University of Nebraska’s Union Plaza.

An all-access pass is under $50 and allows you to hear all sorts of music for a very reasonable price, thanks to local sponsors. One-day passes and individual show tickets are also available.

For more information about the festival, visit LincolnCalling.com

Now in its 10th year, this free summer concert series takes place in lovely Stransky Park in the Irvingdale neighborhood at 17th and Harrison Streets. Local musicians are featured in 11 evening concerts that start in early June and end in mid-August. Each performer is unique with musical styles ranging from big band to bluegrass, blues, country and rock.  Audience members bring blankets and lawn chairs and friendly dogs are welcome. These concerts are sponsored by KZUM radio station along with generous contributions from many local businesses. Learn more at KZUM.org.

Pinewood Bowl, located in Pioneer Park, is an outdoor theatre ringed by a forest of tall pines. Traditionally, it hosts a local musical each summer, but starting in 2012, six hugely successful summer concerts were added. This last year the 5,000+ seat theatre saw performances by Sara Bareilles, the Moody Blues, Ben Folds, Boston and the Doobie Brothers, Ray LaMontagne, Widespread Panic, Blue October and others.

Pinewood Bowl was originally built in the 1940s to hold open air church services for the airmen stationed at Lincoln’s air base and Easter services are still held at Pinewood Bowl every year.