The Music Scene at the Bourbon 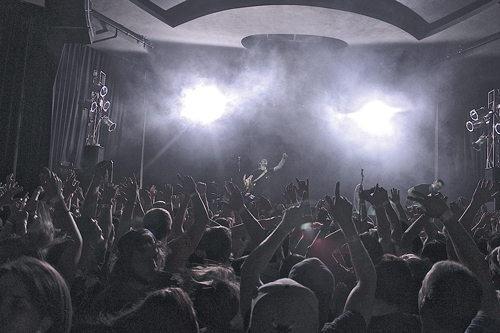 Jeremiah Moore introduced The Bourbon Theater to Lincoln in June, 2009. It has a central downtown

location in the old State (movie) Theatre, which finally closed in 2008. Jeremiah’s experience running Box Awesome under the O Street overpass from 2006-2009 has added to the success of The Bourbon. This unusual venue is arguably the most adaptive in downtown Lincoln. “We have a great balance of smaller local shows intermingled with nationally known touring acts,” said Spencer Munson, the Assistant Director of Marketing and Production. Separate spaces in the theatre allow for performances to be scaled up or down depending upon the artist. The front room, known as the Rye Room, fits an audience of 150, while the main theatre holds around 900. Although big names like Taj Mahal and Lee ‘Scratch’ Perry have made their way to The Bourbon, many performances center around the interests of the students of the University of Nebraska-Lincoln.

The Bourbon is also known as an acceptable venue for artists already in the limelight. Munson explains that he, as well as other people behind the theatre, have bigger plans for the city. “Personally, I want my legacy to be bringing some diversity to Lincoln. I have been very committed to showcasing strong names in electronica, soul, and Hip-Hop, three genres that have never had strong footholds in Nebraska.”

The Bourbon has helped several artists start off on the right foot. According to Munson, with the resources available today, we can expect more from younger artists in the future. “I see more quality in young bands because of community educational groups like Academy of Rock and School of Rock, but I also see many of the older rockers working with younger musicians to give the Lincoln music some quality collaborative art.” The apprenticeships of these young aspiring artists will speed up their ability to hone their skills and produce impressive original work.

Spencer went on to explain the trends in music today. There are two schools of thought. “One group is using laptops to bring more electronic aspects to their music and the other is moving toward classic, old timey methods of making music with traditional instrumentation.” The appreciation for the intellect of musicians from the golden age of recording is a growing trend with many of today’s up-and-comers. But embracing the new technology has also allowed people who are not classically trained to use their interest in mathematics and logic to express themselves artistically. This has been a growing aspect in the music industry since the synthesizer first influenced the sound of contemporary music in the 1970s.

The Bourbon is the place for artists to crank up the decibels. “For years Lincoln hasn’t had a venue with a capacity to house 400-900 people that doesn’t have sound restrictions,” Spencer explained. He has seen many of the artists who have headlined at The Bourbon such as Bassnectar and Pretty Lights to go on to play bigger venues. “We are able to fill a void between small clubs like Duffy’s or the Zoo Bar and big centers like Pershing and the Arena. That’s a very good and a very big cross section of touring acts that Lincoln now accommodates.”

The Bourbon’s use of social media enables direct communication between fans and artists. It allow artists to engage instantly and directly with their fans over the web. Social media not only makes traditional marketing techniques obsolete and wasteful but according to Spencer “…makes the live musical experience even more rewarding.”Understanding and embracing the new technologies and innovations is not something that The Bourbon only does over the web. “Technology has also allowed us to have many different multimedia outlets for the production including HD projectors, computerized lighting rigs, and state-of-the-art sound.” When these elements are combined they can transform a catchy track by a well-known artist into a completely immersive artistic experience in the music. Fans may come to hear their favorite artists perform but often leave with a full-on experience of the music.

It’s no secret to the residents of Lincoln that the city is expanding its horizons with its recent growth and development despite tough economic circumstances. Munson is certain that this growth will influence the music scene as well. During the coming years we can expect some great shows and Munson is ecstatic to set the standard. “Our product is always going to be fun but professional. Good design, good sound, and good staff behind the great music. People will remember those things, too.”Lincoln Today would like to thank The Bourbon Theatre and their attending fans for creating the environment conducive for the next great artists to emerge.