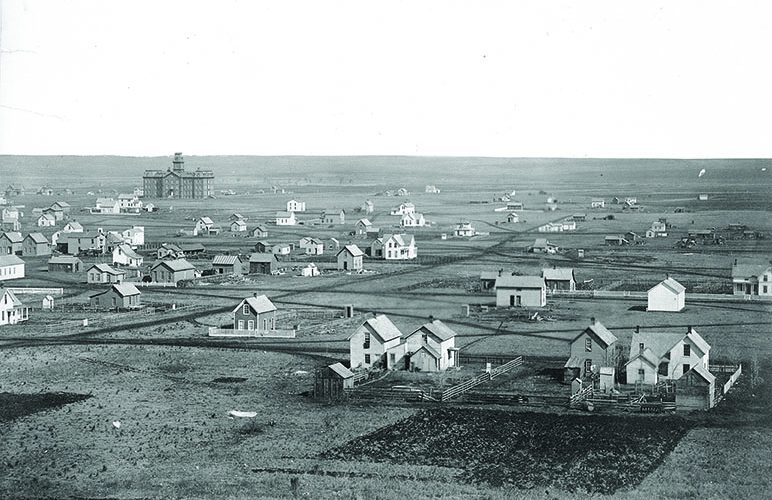 Lincoln today is vibrant and flourishing, Nebraska’s second largest city. But that prominence was not always guaranteed.

Situated away from major waterways that were the primary means of transportation in the mid 1800s, Lincoln began as a tentative village, just like most small towns on the Plains.

But when it became Nebraska’s capital city and the home to its major university, the little village on Salt Creek was on its way to a bright future.

Before white European settlers arrived, the Pawnee tribes lived and hunted along Salt Creek for centuries. It wasn’t until 1856, as the United States continued to push west, that the settlement of Lancaster was founded. Three years later, the village residents met to form a county, which they named after their village. And, small though it was, they named Lancaster the county seat.

Omaha had been the capital ever since the Nebraska Territory was created in 1854, but by 1867, as the territory became a state, most residents lived south of the Platte River. Some of them began agitating to leave Nebraska and join Kansas instead.

Hoping to unite the territory’s people, the legislature voted to locate the new state’s capital city south of the Platte and as far west as reasonably possible. Ultimately, a Capitol Commission chose the village of Lancaster, home to about 500 people.

Nebraska Secretary of State George Kennard platted the land for the new capital city. Work began immediately on a state capitol, and it was completed in December 1868. Built of native limestone with a central cupola, it turned out to be structurally unsound and had to be replaced just two years later. But the city surrounding it was up and running.

The village changed its name to Lincoln in 1869, the same year that the legislature established a state university just seven blocks north of the capitol building. Construction began that fall, and the first 20 students were enrolled in 1871. Enrollment grew to about 1,500 by 1895, boosting the town as the university drew not only the students themselves but the faculty and staff and business community necessary to support them.

Lincoln’s first newspaper appeared in 1867: The Nebraska Commonwealth, published by Charles Gere. He renamed it the Nebraska State Journal in 1868.

The federal government erected a post office and courthouse in Lincoln in 1874 on the lot bounded by O and P streets from 9th to 10th, the village’s original “Market Square.” The market square moved two blocks north and was renamed Haymarket Square. In the early years, it was, indeed, the site of a market for hay and other farm crops, visited by wagon loads of country folks selling their produce.

The Burlington and Missouri Railroad brought the first train to Lincoln in June 1870. Other railroads soon followed, perhaps most significantly the Union Pacific in 1877. By 1892, Lincoln had become a rail hub hosting six different railroads routes.

The telephone connected the community to itself and elsewhere when the Lincoln Telephone Exchange was organized in 1880. Electricity started lighting up the town in 1885. And the first hospital, St. Elizabeth, was founded in 1889 as the city continued to expand.

The city’s commercial center was just south of where the settlement began and near the capitol and the university’s campus. It boasted a variety of dry good stores and then department stores, including Miller & Paine, which opened in 1880 at the corner of 14th and O streets—and remained a downtown staple for the next century.

But when a global economic depression struck in the 1890s, Lincoln’s population fell from 55,000 to 37,000 before immigration and annexation turned things around.

A sizeable contingent of Germans from Russia found homes and work in Lincoln. And the city began to annex nearby towns: Normal in 1919; Bethany Heights in 1922; University Place in 1926; College View in 1929 and Havelock in 1930. All maintain an identity as Lincoln neighborhoods today.

By 1930, a developing highway system, thriving railroads and the beginnings of commercial air travel brought more people through and to Lincoln, and the population grew to nearly 76,000.

By this time, Nebraska was in the midst of constructing its third capitol building, this one designed by Bertram Goodhue and built in four stages. The last phase of the unique capitol with its tall central tower was finished in 1932, built ‘around’ the previous building and paid for when the state offices moved in.

The Lincoln Army Airfield was established outside the northwest edge of the city in 1942, and the Army used it to train more than 25,000 aviation mechanics and process more than 40,000 troops for combat during World War II. It closed in 1945, but the U.S. Air Force reactivated it in 1952, during the Korean War. When it closed again in 1966, the city annexed the land and used it as the site of the Lincoln Airport.

By that time, the original downtown was no longer the retail hub of the city. As the city’s residential area spread east and south, Gateway Shopping Mall opened in 1960, several miles east of downtown.

After the Vietnam War, hundreds of refugee families came to Lincoln, which the U.S. State Department had designated a Refugee Friendly City. Large groups of Karen (a Burmese ethnic minority), Sudanese and Yazidi people have been added since then, and refugees turned entrepreneurs have created a residential and business community along the 27th Street corridor that features dozens of ethnic markets and restaurants.

In recent decades, the downtown area has been revitalized with new streetscapes and street lighting and a variety of office structures, including two major bank buildings. Not far away, the Lincoln Children’s Zoo is recognized as one of the best of its kind. And the area still referred to as “downtown” has become a residential draw and is now home to more than 6,000 apartment and condo dwellers.

Just west of downtown, the city redeveloped the area now called the Haymarket, beginning in 1985 to repurpose vacant warehouses for use as retail spaces, restaurants and housing. Pinnacle Bank Arena, finished in 2013, stands at the north end of the Haymarket district—very near the banks of Salt Creek. The 15,500-seat arena hosts concerts and sports events and is the home of the University of Nebraska’s men’s and women’s basketball teams.

Lincoln boasted a population of nearly 290,000 in 2018—a century and a half of growth—still anchored by the state capitol and the university that helped turn a tentative village into an innovative city.