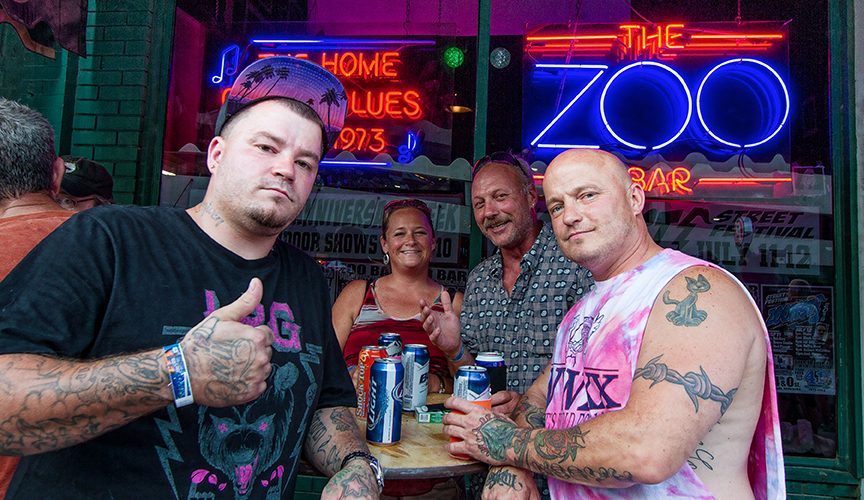 The summer of 2020 brought disappointments to the live music world for performers and audience alike, as artists cancelled shows and venues closed. Through the warmer months, musicians, performers and visual artists adapted to outdoor venues to keep Lincoln’s scene alive. Locals and visitors alike hope to see 2021 bring back the vibrant festivals that make Lincoln a destination for music and art lovers.

Always held each July, 2021 marks the 47th anniversary of Zoofest, a week-long festival starting with club shows and moving to the street for two days of non-stop live music. Zoofest showcases national acts like Mavis Staples, Booker T and the MGs and Los Lobos, as well as the new blues generation represented by Nikki Hill, Heather Newman and Selwyn Birchwood. Local powerhouse bands like Josh Hoyer and Soul Colossal, Big Daddy Caleb and the Chargers, Heather Newman, and the Sebastian Lane Band, the Zoo Bar has retained its status as a beacon of the midwestern music scene.

The Zoo Bar, a Lincoln institution with a storied history, has managed to weather the storm, and carefully re-opened for live shows with limited capacity, creating a virtual tip jar for staff and selling mixed drinks and merchandise. Current owner Pete Watters is determined to hold tight to this cherished Lincoln institution.

Original owner Larry Boehmer, then a college student, booked the first show in 1973. The Zoo quickly grew into a pick-up gig venue for some of the greatest blues luminaries to grace stages in Chicago, Nashville, Memphis and Austin. Among the many greats to play this tiny club include Buddy Guy, Junior Wells, Koko Taylor, Albert King, Clarence ‘Gatemouth’ Brown, Son Seals, Jay McShann, Charlie Musselwhite, Candye Kane, James Harmon, Lil’ Ed, Luther Allison, Billy Bacon, Jimmy Vaughn and Lincoln’s own legendary Chicago transplant, Magic Slim and the Teardrops. The Zoo Bar was Slim’s first time playing at a white bar in a white town far from his stomping grounds of Chicago’s South Side. He liked it enough to move his family to Lincoln.

In the heart of downtown Lincoln at 146 N.14th Street, this legendary bar has offered live entertainment seven nights a week for decades, and expanded its focus to include comedy, jazz, and DJ dance nights. The 2020 festival is tentatively set for July 10-11. Follow the schedule at zoobar.com or on Zoo Bar Fan Club on Facebook.

This September event now schedules with the Lincoln Calling music festival as well as forming many partnerships with other art-related organizations.

Each Tuesday, Jazz in June gives jazz afficionados top-notch music on the grounds behind Sheldon Art Museum, 12th and R streets on University of Nebraska’s city campus. Lawn chairs and blankets are welcome as the series hopes to return live performances in 2021. Shows start at 7:00 p.m., and the Jazz in June Market begins at 5:00 p.m., featuring a variety of food and drink, locally-produced food, and artisan wares.

The concerts are free, but suggested donations help support this long-running Lincoln tradition.

Find information on the 2021 schedule at jazzinjune.com.

Meadowlark presents world-class musicians in comfortable and unusual venues at a fraction of the cost of larger concert settings. Venues change with each concert, and are often outdoors with food trucks and drinks, often aligned to musical themes.

Look for this festival in July. Tickets are subsidized to allow access for all. Children under 16 free. For this year’s schedule see meadowlarkmusicfestival.org.

For over fifty years, Lincoln’s annual Czech Festival has been held in May, hosted at the historic Pla Mor Ballroom at 6600 West O St.

Like many U.S. cities, Lincoln holds an annual Juneteenth celebration. For 40 years the Clyde Malone Community Center has sponsored this commemoration of June 19th, 1865, the day the last slaves in the U.S. were freed, two years after the Emancipation Proclamation. This light-hearted family-friendly event is held in mid-June, most recently at the F Street Community Center, 13th and F Street. Enjoy delicious food, dancing, rap contests, a community health fair and plenty of children’s activities. For information: lincoln.org.

Although 2020 brought changes to Pride, this festival promotes and celebrates equality for the LGBTQIA community in Lincoln and across Nebraska. Held at Pinnacle Bank Arena and outside in the Festival Lot, this two-day event includes food vendors, music and performing arts, dancing, featured speakers, and a kids’ zone from 2:00 to 7:00 p.m. with fun activities for youth. For information, see Starcitypride.org.

Although cancelled for health safety in 2020, Stransky Music Series intends to return in 2021 for its 17th season. More info: kzum.org

Marking its 15th anniversary last year, Lincoln Exposed showcases the amazing spectrum of local talent and the strong bonds of Lincoln’s music community. From its beginning in a single venue with 20 bands, Lincoln Exposed has exploded into a relentless four-day festival with over a hundred performances in more than five venues.

Combining veteran bands like Charlie Burton and Or What?, FREAKABOUT, Shithook, Domestica, The Killigans, Universe Contest, and Jack Hotel with up-and comers-like Death Cow, The Fey, Big Daddy Caleb and the Chargers, Miss Taken, and The Credentials. Lincoln Exposed unites and celebrates musicians of all ages in this energetic festival. Audiences can hop venues to sample a buffet of music for every taste. Blues and bluegrass, metal, pop-punk, rock, Latin fusion, and folk Americana acts light up stages from 6:00 p.m. to 2:00 a.m. for four intense nights of entertainment. Day passes are $8-10 and festival passes are a bargain at $25.

Host venues include Duffy’s Tavern, 1867, Zoo Bar, Bodega’s Alley, and the Bourbon Theatre, all within walking distance in downtown Lincoln. Venues are restricted to 21+ except the Bourbon Theatre at 18+. For info: downtownlincoln.org, or visit Lincoln Exposed on Facebook.

A presence in Lincoln’s University Place neighborhood for 45 years, the Lux quickly adapted to the shifting public health scenario in 2020. With the demand for its quality year-round classes for youth and adults, Lux moved into on-line instruction, video tutorials, and later introduced private in-person lessons with health safety protocols. Lux also provided 400 free art supply kits over the 2020 summer.

With the impact of the pandemic on indoor gallery shows, Lux leaders hatched a plan for a massive outdoor installation project, and Art Safari was born. With natural themes—Underwater, Cave, Forest—a parking lot became a drive-through/walk-through immersive art experience created by 20 artists, and drew nearly 1,500 visitors and their families over two weeks. Due to its immense popularity, Lux has every intention of bringing Art Safari back as an annual event.

For information on Art Safari and other events, visit luxcenter.org

Art in the Garden

Lincoln’s Sunken Gardens, located on the southwest corner of 27th and D streets, hosts an annual Art in the Garden festival each September. More than 50 artists from the Noyes Art Gallery mount work among the garden’s spectacular plantings.

The broad variety of paintings, sculptures, photographs, pottery, stained glass, furniture, clothing, and are available for purchase. A portion of the proceeds supports the Sunken Gardens. Admission is free. Learn more at noyesartgallery.com.