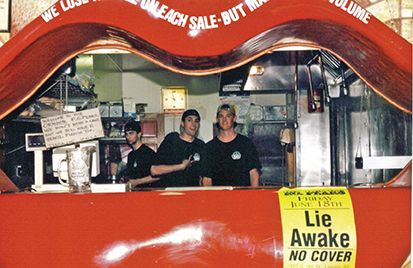 Lincoln’s restaurant scene is rich in history, which is why, in early 2017, Arcadia Publishing’s The History Press, reached out to me to write a memory book for its American Palate series. The History Press wanted stories and photos about and recipes from restaurants that are no longer in Lincoln but had elicited cherished memories from their patrons.

Having served as the Lincoln Journal Star’s dining critic since 1998, I was familiar with Lincoln’s culinary history, which included several long-time restaurants that still operate, including such gems at Misty’s, Lee’s Chicken, Runza, Tico’s and Billy’s. But it wasn’t until I began my research—beginning with city directories that dated back to the early 1900s—that I fully realized just how remarkable (and delicious) it was.

I published Lost Restaurants of Lincoln, Nebraska in November 2018 after six months of researching, interviewing sources, writing and rewriting. I began with a list of more than 100 that I finally winnowed down to 32, divided into two categories: “Restaurants and Supper Clubs” and “Cafes, Diners and Drive-Ins.”

The following are 10 restaurants that I felt were “must-haves” when chronicling Lincoln’s dining history. I’m not saying they’re the 10 “best” or “most memorable.” It’s just that when you ask folks about Lincoln’s restaurant history, each of these 10 tend to make their lists for one reason or another.

Those “reasons” were why the book resonated with so many diners. Everybody, it seemed, had a cherished memory from one or more of the eateries. Over the past two years, I’ve spoken at several luncheons, meetings, brown bags, historical series, etc., and it’s never ceased to amaze me at how much these restaurants affected people.

Tony and Luigi’s—For me, this was my most enjoyable interview experience. I sat down with cousins Tony Messineo and Mike Alesio, whose father was Tony Alesio, co-founder and long-time owner of the legendary Italian restaurant that sat at 52nd and O streets. I basically placed the tape recorder on the table in front of them and said “go.” They spent the next hour telling stories about customers, staff, celebrities and, of course, the wonderful food, including the “Nebraskacut,” a New York strip cut into the shape of the state. The restaurant existed from 1945, when it made $6.50 on its first day, to 1993.

King’s Food Host—Started by Larry Price and Jim King in the 1950s, the drive-in was arguably the first successful ‘chain’ to take root in Lincoln. It was known for its burgers, cheese frenchees, bright-orange booths, tableside telephones for ordering and a no smoking policy. At its peak, there were nearly 140 King’s restaurants in 17 states and Canada. And, thanks to the Lincoln-originated Amigo’s chain, those famed burgers and cheese frenchees still are available today.

Miller & Paine Tea Room—Most conversations about the tea room, which occupied the top floor of the five-story building across the alley from Miller & Paine’s eight-story building, at 13th and O streets begin or end with the eatery’s macaroni and cheese, pot pies and legendary cinnamon rolls. What made those cinnamon rolls so good? According, to the late Arne Pederson, an M&P baker I once profiled for the newspaper, it was lard and cinnamon from Saigon. Frozen bread was a definite no-no. M&P made its dough from scratch.

Alice’s Restaurant—What was the thing to do after attending Sunday church services? Eat at Alice’s in College View, of course. A line outside the restaurant often snaked down South 48th Street on Sundays, even after it expanded its seating from 25 in 1958 to 160 in 1974. Alice’s was known for its home-style fare, southern fried chicken roast beef, meatloaf and freshly baked pies.

Arturo’s—Before it changed its name to Arturo’s, the downtown restaurant was known as the Taco Hut, which, when Arturo and Emilina Longoria opened it in 1961, was the city’s first Mexican eatery. Most Lincolnites were unfamiliar with Mexican fare, so Emilina adjusted the menu to get people in the door. She then introduced them to Mexican foods that are now commonplace in Lincoln. The restaurant became known for its tachas—a flat, crisp tortilla loaded with refried beans, ground beef or chicken and melted shredded cheddar cheese.

Legionnaire Club—The club, which catered to veterans, enjoyed its heyday during the 1960s, 70s and 80s when former Nebraska football coach and athletic director Bob Devaney was one of its regular and most prominent customers. It became known as much for its live entertainment, which included jazz great Jay McShann from Kansas City, as it did for its steaks.

Tastee Inn & Out—Nebraskans love their loose meat sandwiches, and Tastee’s was one of the most popular in Lincoln to sell them. It enjoyed a run of more than 50 years at the corner of 48th and Holdrege streets. The restaurant also was known for its onion chips and dip as well as its backward drive-thru (transactions were conducted on the passenger side of a car) and vacuum tubes which delivered orders from the front counter to the kitchen.

Acme Chili Parlor—The downtown restaurant arguably is Lincoln’s first most successful restaurant. Greek immigrant A. C. Christopulos opened it in 1909 at 14th and O streets, where the family ran it until 1963. Its “genuine Mexican chili” was so hot and greasy that the kitchen served a side of vinegar to temper the grease and a pitcher of ice water to cool the taste buds.

P.O. Pears—Opened in 1980, the restaurant at 322 S. Ninth Street was known for its unique decor, with much of it coming from a movie warehouse, and tasty burgers, including the Jiffy Burger, which was made with peanut butter. Patrons fondly remember ordering and picking up their burgers at the giant set of lips that fronted the kitchen.

K’s Restaurant—The longtime restaurant in the Piedmont Shopping was memorable for a number of reasons, including its lion-themed decor and heart healthy menu items. But its biggest claim to fame was being included in “Terms of Endearment,” the Academy Award-winning movie filmed in Lincoln.

Lost Restaurants of Lincoln, Nebraska is available at local bookstores. You’ll be able to read about the history of these restaurants and 22 others. It’ll take you on a tasty trip down memory lane.