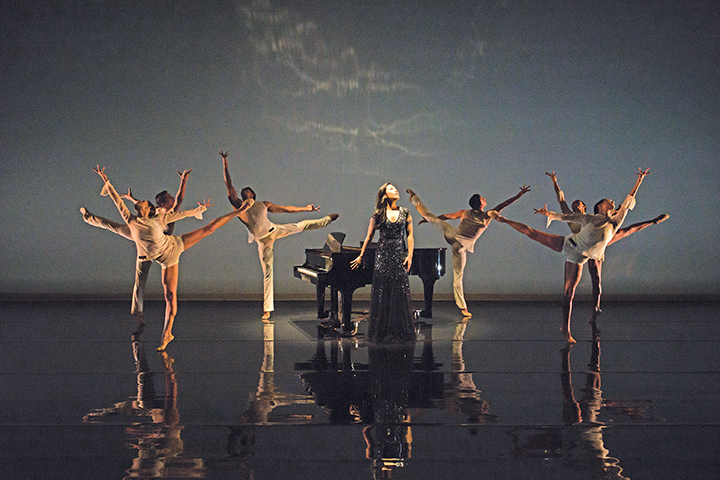 by Michele Tilley and Matthew Boring

Celebrating its 30th anniversary season, the Lied Center for Performing Arts welcomes the world’s greatest artists to its stage, featuring the biggest season of Broadway in Lied history, amazing classical programs, top dance performances and a diverse array of programs providing something for everyone.

The Lied Center’s Broadway programming continues to get bigger and better every season, and this milestone season is no exception. This year, the Glenn Korff Broadway Series brings some of Broadway’s hottest titles to the Lied Center, including Tony Award-winning Bandstand, An American in Paris and Beautiful—the Carole King Musical. The center also will present Grammy and Tony Award-nominated Waitress, the hilarious Blue Man Group and Tony Award winner Kelli O’Hara, one of Broadway’s biggest stars.

The 2019-20 dance lineup includes three world-renowned dance companies, which bring a wide array of styles and programming to the Lied. Bill T. Jones/Arnie Zane Company performs On The Water, with styles influenced by improvisation, African and Afro-Caribbean dance and modern techniques. The Royal Winnipeg Ballet returns to reinvent one of the greatest stories of all time in a dazzling new production of The Wizard of Oz, vividly brought to life by choreographer Septime Webre. And, the continuously innovative Aspen Santa Fe Ballet joins forces on-stage with Van Cliburn Piano Competition medalist Joyce Yang to create a dazzling program.

Classical programming offers numerous causes for celebration. Murray Perahia is one of the most sought-after and cherished pianists of our time. Winner of three Grammy Awards and nine Gramophone Awards, Perahia returns to the Lied Center for the first time in 15 years. The Boston Pops On Tour, with conductor Keith Lockhart and the entire orchestra, mark their return to the Lied Center with a program featuring the symphonic splendor of John Williams’ iconic music.

Aquila Theatre brings one of the great novels of the 20th century to the stage: George Orwell’s dystopian 1984.

Also coming is the hilarious The Second City: She the People, entirely created, designed and performed by the fearlessly funny women of The Second City; Super Diamond, The Neil Diamond Tribute, the most celebrated Neil Diamond tribute artist in the world; Irish singing sensation Michael Londra and his dazzling cast of Riverdance and Lord of the Dance alums, performing a lively evening of traditional Irish music and step dancing; Michael Feinstein, dubbed “The Ambassador of the Great American Songbook”; and for the whole family, Daniel Tiger’s Neighborhood Live!and Air Play, a modern spectacle that brings to life the very air we breathe; plus much more.

Beyond presenting dozens of world-class artists year after year, the Lied Center is also committed to providing local students with opportunities to engage with professional touring artists during their time in Lincoln. Because the Lied Center is a proud affiliate organization of the University of Nebraska-Lincoln, students experience unforgettable opportunities with Lied Center artists who participate in educational lectures, master classes, residencies and more. Students have the opportunity to work with cast members from multiple national tours of Broadway musicals and participate in master classes with world-renowned musicians.

Find the Lied Center’s full 2019/20 season listing on the opposite page. For more information on each performance, including videos of the artists, visit LiedCenter.org.